Photog Portrait: Ron Ross Took His Most Prized Picture at a Secret Rolling Stones Show in Fort Worth

Erasmo Viera
The photo of Mick Jagger, Keith Richards and Ronnie Wood of the Rolling Stones, taken in ’78 at Will Rodgers Auditorium by Ron Ross.
Hit Records proprietor Ron Ross is fond of repeating one phrase as he leads customers through his store: “Most of this stuff you can’t find at Wal-Mart.”

And it’s true. The Ferguson Road shop, which oddly enough carries CDs and DVDs, not records, is as much a small museum as a shop. In addition to an array of rock, metal, hip-hop and punk offerings, Hit Records displays a large collection of The Three Stooges, Rolling Stones and Aerosmith memorabilia and fading photos of a number of legendary musicians.

On our visit we were concerned primarily with those photos, which were taken by Ross during his earlier career as a music photographer. We spoke with Ross about the changes he's witnessed in the Dallas music scene since he started out in the ’70s.

When did you start taking photos of concerts?
I started taking concert photos in 1974 with a little Instamatic camera 126, then I moved up to a 35mm when I bought my first Canon TX camera in 1976.

How old were you when you got started?
I was 18 years old. I just used to go to a lot of concerts in the ’60s and ’70s. I would just take pictures for the heck of it, then I figured out that I was pretty good at it. When I started shooting 35mm, I really learned; I progressively got better and better. After a while, the record companies started to get interested in my work, so I started taking pictures professionally for Warner Brothers, Capitol Records, RCA, A&M Records, PolyGram Records and MCA.

Then I branched out into magazines. I did work for Buddy Magazine, which is local. I also did work for Billboard Magazine. I just grew and grew. I shot professionally from 1976 until 1996. There was a 20-year span when I was shooting over a hundred shows a year. One night it would be AC/DC, then the next night it would be Iron Maiden, then it would be Fleetwood Mac, Duran Duran ... it just went on and on.

What was the turning point in your professional career?
During the ’70s and ’80s, the record labels had merchandisers and sales people who would come to my record store. They would tell us about new groups that were starting or new albums that were coming out. They saw and liked my work; they would tell me to go shoot bands like Bon Jovi and Mötley Crüe. After a while I started to get paid for [them] and make good money.

Back then it was a lot easier, because they didn’t limit you to the first three songs. Nowadays, they’ll pull out the battery from your camera, jerk your film out or just take your camera away. When it started getting like that was when I started slacking off. During the ’70s, ’80s and early ’90s they didn’t bother you. You could just walk up to Black Sabbath and take their picture. Hit Records’ walls are covered with evidence of owner Ron Ross’ earlier days as a successful music photographer.
Erasmo Viera
Do you remember your first gig?
I remember my first show was at UTA, in the Texas Hall in Arlington. CBS Records hired me to take photos of REO Speedwagon, Journey and Judas Priest.

Snaps, that’s quite the lineup for your first gig.
That was the first gig where I started to get serious with it; when I first got a press pass, you know, all access.

In what other ways is it different to shoot gigs today?
Everything was different back then. Nowadays people just hold their cell phone up and the camera takes a picture for them. When I did it professionally, I took the picture; I’m setting the light meter, the aperture and the film speed. When I took a picture of Stevie Nicks, I took it; not the camera. You have to focus, you have to get it centered, and the lighting has to be right.

Concert photography was the most difficult of all, because those people don’t stand there and pose for you. They’re jumping around; lights are flashing. It’s not like taking a picture of a tree in a park that’s just standing there. I was good at it; I am proud to say that I have a heck of an inventory of photos. You know there are a lot of photographers that have different styles.

And what’s your style?
I like taking pictures of legends. Not a lot of individuals have pictures of Led Zeppelin, Pink Floyd, the Doors, and the Rolling Stones. Now, when the legends come out, they’re like 100 yards away. Back then you could just walk down front, wave to everybody, and take a picture of Heart or Blondie. I got tons; every night from 1974 to 1996 I was shooting shows. I was going to Reunion Arena, Memorial Auditorium, Electric Ballroom or to Tarrant County Convention Center in Fort Worth. There aren’t many venues that I haven’t taken pictures in. Oddly, Hit Records sells CDs and DVDs, not records.
Erasmo Viera
Do you have a prized possession?
Probably the one above the door: That’s Mick, Keith and Woody, three members of the Rolling Stones. I took that in 1978, in Will Rodgers Auditorium in Fort Worth. It was a secret show that they didn’t announce until 5 o’clock on the day of the show.

There were rumors floating around about the secret show, and I just happened to be at the right place at the right time. I got a press pass, and they played in an auditorium not as big as this room, and it was amazing. I was sitting there saying, “This is amazing. I am seeing the Rolling Stones this close.” 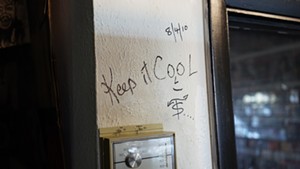 Steven Tyler wrote "Keep It Cool" on the wall of Hit Records in 2010.
Erasmo Viera
How does it feel to shoot music history?
When I went to a concert, I would have my camera, because that’s what I did. You miss a lot of the show when you’re shooting. Now that I go, I get to enjoy the whole experience. I got everybody that I’ve ever wanted. When you got pictures of Zeppelin, the Doors, the Rolling Stones and the Who, you don’t need anything else. It doesn’t get any bigger than that.

I'm not going to lie, I kind of envy you at this moment.
Well, that’s the one advantage of being old: You’ve seen it all.