Live Oak Is Closing, But You Can Still Hear Live Music at These 9 Fort Worth Bars

via Lola's Saloon on Facebook
Mac DeMarco performing at Lola's Saloon, which might be the best venue on this list.
Fort Worth’s music scene got an unexpected sock in the mouth last month with closure of the music venue Live Oak.

Sara DeMore of Sara and the Saratones, an Arlington resident, says Live Oak was the primary venue for her eclectic acoustic group. “Sometimes, a place will close down and you’re like ‘Well, I saw that one coming,’” she says. “Live Oak was a shock.”

Live Oak will reopen in downtown Arlington this fall, keeping its primary features — live music hall, lounge, rooftop bar and street level patios — and adding more seating, parking and a new menu. “For our ticketed shows, we expect a good share of our concert-going fans to make the drive [to Arlington],” entertainment director Brooks Kendall Jr. says. “For the rooftop and restaurant guests, we will be focusing on building popularity with Arlington locals.”

Don’t fret, the city’s music roots still dig deep. In the meantime, live music lovers in Fort Worth can still get their fix at any one of these worthy venues.

VVOES playing the Boiled Owl.
via the Boiled Owl on Facebook
Boiled Owl
909 W. Magnolia Ave.
For five years, the Boiled Owl Tavern has been staging acts, and its April Fool’s Day Facebook post announcing a free, surprise show sort of sums up the local camaraderie. “Our friends at Republic Street are expecting rain tonight so they’ve moved the show to the Owl,” the post read. “Happy to have Programme, Beach Priest and Diamond Age.”

Josh Weathers playing the Aardvark.
via the Aardvark on Facebook
Aardvark
2905 W. Berry St.
The Aardvark, which sometimes doubles as a Sunday morning place of worship, has featured musicians such as Pat Green, the Eli Young Band, Whiskey Pistol and many others. Texas Christian University alum Taylor Kennedy, who plays rhythm guitar and vocals for Whiskey Pistol, says while the band has played in the Stockyards at places like Whiskey Girl and the Thirsty Armadillo, the Aardvark is a favored spot.

Lola’s Saloon (pictured at top)
2736 W. 6th St.
For a decade now, Lola’s has contributed to Fort Worth’s music scene by showcasing local musicians as well as touring bands. The venue had a seven-year run as Fort Worth Weekly’s “best music venue,” and according to its website the saloon is also “well known for bringing bands to Fort Worth that would normally choose to play Dallas or Austin.”

The Grotto's marquee shows a visit from New Orleans band Roar, as well as Dallas' Nervous Curtains.
via the Grotto on Facebook
The Grotto
517 University Drive
Along with live music, the Grotto cultivates local talent by hosting open mic nights, record releases, birthday bashes and more. An upcoming show on April 9 will feature Memri along with the Schisms, ManifestiV, and Sex Regrets. 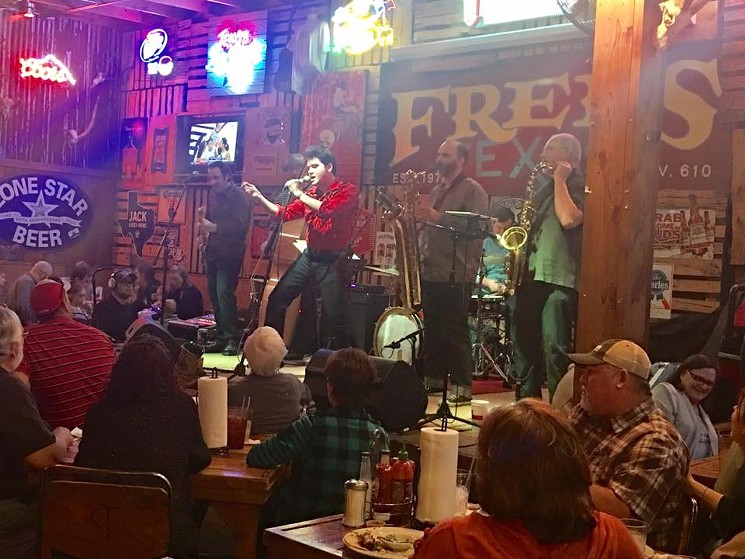 The Stratoliners play Fred's Texas Cafe
via Fred's Texas Cafe on Facebook
Fred’s
915 Currie St; 3509 Bluebonnet Circle; and 2730 Western Center
At Fred’s, the focus is on food. But the restaurant’s three Fort Worth locations, including one near TCU, also offer live music with this sweet deal: no cover charge.

Lita Ford playing the Rail Club.
Mike Brooks
The Rail Club
3101 Joyce Drive
“The Rail is the ultimate music venue,” musician Bobby Michaelides says on the venue’s Facebook page. “Great sound, great stage, and ownership who go out of the way to make sure you have a great time without killing your wallet. You get the best of local and national talent on any given weekend.”