The 10 Best Concerts of the Week: Morrissey, Glass Animals, Rick Ross and More 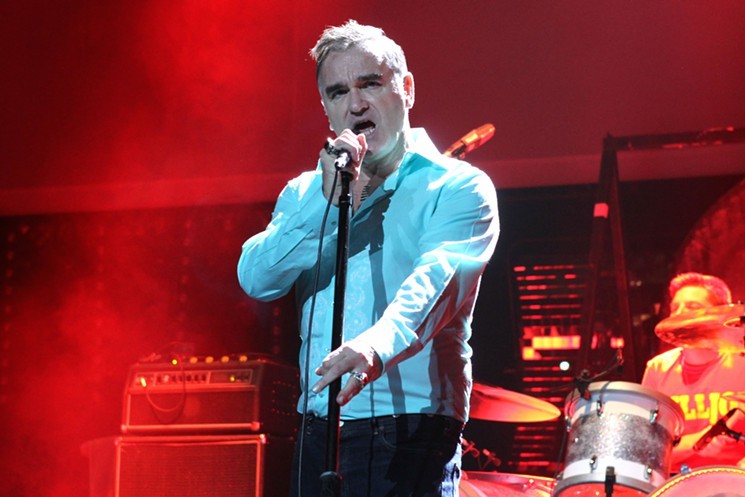 Morrissey has canceled his last two Dallas dates, but there's every indication his Saturday show at Majestic Theatre will go off without a hitch.
Shutterstock
The Majestic Theatre is slated to host the one and only Morrissey Saturday night. He's canceled the past couple of times but we're pretty excited, and confident, that he'll make it. Plus, third time's the charm, right? On the off chance he doesn't make it, again, there are plenty of buzz-worthy shows going on this week. Psych pop darlings Glass Animals stop at South Side Ballroom on Tuesday, Rick Ross swings through Gas Monkey Live! on Thursday and Edie Brickell and New Bohemians play a three-day, sold-out gig at the Kessler Theater.

Tennis have a knack for making the old new again. When the husband and wife duo of Patrick Riley and Alaina Moore burst onto the music scene in 2011, they instantly became the darlings of the blogosphere and college radio with their dreamy indie-pop tunes and retro aesthetics. That album, Cape Dory, won the hearts of music lovers across the country who learned the couple wrote it after returning from a year-long sailing trip on the Atlantic. For their most recent and fourth album, Yours Conditionally, the couple turned to the same method, and set sail for the Sea of Cortez along Mexico’s coast. They returned with music channeling the ’70s even further: Moore’s voice is strikingly reminiscent of Stevie Nicks but it still feels like Tennis all the same. Mikel Galicia

While Glass Animals frontman, Dave Bayley, was studying neuroscience at King’s College London, he had no idea his band would catch the eye of Adele producer Paul Epworth. The band all finished their schooling before going on to become trip-hop stars across the pond, being the first band signed to Epworth’s label Wolf Tone in 2012. Now fresh off the release of their sophomore album How to Be a Human Being, the quartet hailing from Oxford has popped up on critic’s radars and infected the hearts of Europe’s club goers and college kids with their psychedelic pop. Their latest album features songs inspired by oddball stories and millennial pop culture touchstones such as Adventure Time. “Season 2 Episode 3” tells the tale of a boy in love with a couch potato, while “Mama’s Gun” takes its cue from a taxi driver’s meth fueled bender. Glass Animals will be joined by Australian psychedelic dance trio Jagwar Ma, for a night full of bright poppy music with a subdued electronic edge. Nicholas Bostick

When Rick Ross takes the stage at Gas Monkey Live! he’ll be a free man for the first time in a long time. Last week a video of Ross removing his court-ordered ankle monitor went viral and now the Bawse is in full celebratory mode. This show comes a few weeks after the release of his chart-topping album Rather You Than Me. With nine studio albums under his belt at the age of 41, the Teflon Don is hitting new strides in his career. He still boasts about his luxurious lifestyle in his raps, but on his new album he couples that with reflective storytelling and a mentor mentality. This is best heard on “Idols Become Rivals,” where Ross takes aim at hip-hop mogul Birdman, who’s holding Lil Wayne’s new album hostage. (Lil Wayne is one of Ross’ longtime collaborators and friends.) This show is poised to be one of Ross’ best Dallas appearances as he has a lot of new material to perform. Mikel Galicia

The buzz surrounding legendary jam band Grateful Dead has reached a fever pitch after the Sundance premiere of Martian Scorsese’s Long Strange Trip and the announcement of a May tour for Dead & Company. But before Bob Weir sets out on the road with former Dead members Bill Kreutzmann and Mickey Hart, he’ll be cruising through the South to support his latest solo album, 2016’s Blue Mountain. Working with famed Americana singer-songwriter Josh Ritter and assorted members of The National, Weir’s album is a reboot for the 69-year-old guitarist. Sporting a more grizzled voice after decades of experience playing with the Grateful Dead, Weir seems to have toned down the psychedelic soundscapes of his past work, opting for a cavernous country vibe loaded with clever allusions and analogies to cowboy culture. The Campfire Band, comprised of the aforementioned members of The National as well as RatDog guitarist Steve Kimock, helped with the recording of Blue Mountain and will back Weir throughout his solo tour as well. Seeing as Dead & Company won’t be passing through Dallas during their tour, this is the best chance Dallas Deadheads will get to see Weir in action. Nicholas Bostick

Sam France and Jonathan Rado are the California-based duo Foxygen. They’ve been making waves since the mid-2000s with their unfailingly dynamic live performances. Their latest album, Hang — anchored by the jubilant single, "Follow The Leader" — is a rollicking affair that incorporates elements of classic rock, glam, jazz and even showtunes into its bombastic total package. As frenetic onstage as they can be in the recording studio, Foxygen shows are marked by glittering lights, trippy stage designs and a bevy of backing vocalists and musicians. But all this merely serves as a backdrop for Rado's stoic keyboard and guitar playing and France's theatricality as a lead vocalist. At times, Foxygen concerts can appear to be on the verge of slipping completely off the rails, but years of touring have taught them how to walk this high-wire. They're playing the new album in its entirety on this tour run, so expect to hear sharp versions of those tracks and a few older tunes slipped in among an evening full of audio and visual wonder. Jeff Strowe

The Wind + The Wave have definitely gained momentum and soared up the charts since their debut on the scene four years ago. I mean, how catchy is humming "Trou-ble-ma-ker..."? The duo from Austin could be described as alt-country to indie rock to blues rock and everything in between. Their third and latest album, Happiness Is Not A Place, has earned critical acclaim and a national tour. Diamond Victoria

Along with Erykah Badhu, Edie Brickell is one of the most iconic female musicians to come out of Dallas. She and her three-piece band, New Bohemians, became staples in the world of alternative rock during the late '80s and early '90s with hits such as "What I Am." The band broke up for a while when Brickell married singer-songwriter Paul Simon, but they reunited in 2006 and released the album Stranger Things. And this week, beginning Friday and ending Sunday, Edie Brickell and New Bohemians play the Kessler Theater for a benefit for the nonprofit music school La Rondalla Oak Cliff. DV

The voice that launched a thousand jangly guitar bands, Morrissey has made sardonic posturing and self-involved sensitivity a hip look for over 30 years now. At 57 years old, the artist formerly known as “the only guy from the Smiths whose name you can remember” remains as angsty and golden-tongued as ever. He can still make a pop song feel like a dark secret whispered in a David Lynch wet dream. With a silvery lilt and a melodic turn, he can still make you feel 17 again — and that the world is an immensely beautiful thing just waiting to be conquered. Despite the years of controversy, angry veganism and scores of canceled shows, Morrissey is still just Morrissey: One of the very best and most influential figures pop has ever seen. Jonathan Patrick

Britain’s latest attempt to conquer the hearts and minds of America’s youth comes in the form of The 1975. The quartet’s power pop '80s sound blends the look and lovelorn lyricism of new wave pop-rock bands like the Cure or Tears for Fears, with bombastic instrumental compositions reminiscent of Michael Jackson and Huey Lewis & The News, all projected through the glazed-over eyes of a Jonas Brother. Their latest album I like it when you sleep, for you are so beautiful yet so unaware of it, adds a layer of angst to the sonic grab bag. Tracks like “Change of Heart,” sound like they’d feel right at home in a John Hughes flick, but are mixed in with more ambient electronic-themed tunes like the album’s title track. While it might be hard to find your way to your seats through the throng of screaming fans this band has garnered since their debut in 2012, The 1975 is talented enough to make their hodgepodge of competing sounds compelling to say the least. Nicholas Bostick

Despite Breaking Benjamins ever-revolving door of members, they've remained pretty consistent in their sound, likely due to Benjamin Burnley staying firmly planted as lead composer and vocalist. The original lineup formed in 1999 and the band seems to be part of a resurgence of early 2000s hardcore acts making their way through town as of late. Breaking Benjamin's latest album, Dark Before Dawn, released in 2015 to critical acclaim. See the band Sunday at House of Blues and see for yourself how they've managed to keep even their earliest fans satisfied. DV