Mark Graham
Rapid gentrification spurred by construction of a new ornamental bridge has driven up land values in West Dallas dramatically in the last year.
The mayor, who has steadfastly denied any role or interest in West Dallas gentrification, is now actively working behind the scenes as a real estate broker to get a major West Dallas landholder to sell $20 million worth of land at what appears to be 10 percent of its current market value.

Why would anyone sell anything at 10 percent of its value? Take into account that the landholder, HMK Ltd., has been the target of a bitterly fought mayoral crackdown on low-rent landlords. So the offer isn’t some little hummingbird out of the blue but more like a hawk.

The would-be buyers, whom I was unsuccessful in reaching for comment, are former officers of Staubach Capital. Roger Staubach is a major player in the transformation of West Dallas from a humble working class Hispanic and black residential enclave of aging single-family cottages to a glamorous high-rise district.

The mayor’s role in this offer is direct. Identifying himself as “Mike” and insisting his role was “private,” Rawlings called Khraish Khraish, a partner in HMK, last week and told him to expect a “letter of intent” from Paul Jackson and Richard Morgan, principles in a company called Spyglass Equities.

What strikes me – excuse me if I take this a little personally – is that this role for the mayor is exactly what the mayor has insisted from the beginning he was not doing. In fact, when I said he was doing it last October, he called Robert Wilonsky of The Dallas Morning News to his knee and fed him an entire woeful line about what a mean paranoid guy I was.

Wilonsky mocked my reporting on the story, writing: “Meanwhile, in the shadows, Mayor Mike Rawlings twirls his mustache, working behind the scenes to chase the landlords out so Rawlings' developer buddies can land-grab primo property at rock-bottom prices.

“In a post-truth era,” Wilonsky wrote, linking me to The Orange One, “that’s the sort of sweet conspiracy that people love to believe is true. Except, in this instance, ‘No, it's not,’ Rawlings said Monday afternoon.”

Well, excuse me, Robert, but yes it was true then. Now it’s even truer.

When Rawlings called Khraish last week to introduce the would-be buyers, he said, “They’re the real deal. … They’re good guys, so pick up the phone, and you guys can do it. If you need anything from me, let me know.”

The buyers may be the real deal themselves, Khraish tells me, but the deal they offered in their letter was not. “The valuation is completely misguided,” he said. The letter starts out about right, Khraish says, but it rolls downhill quickly from there. 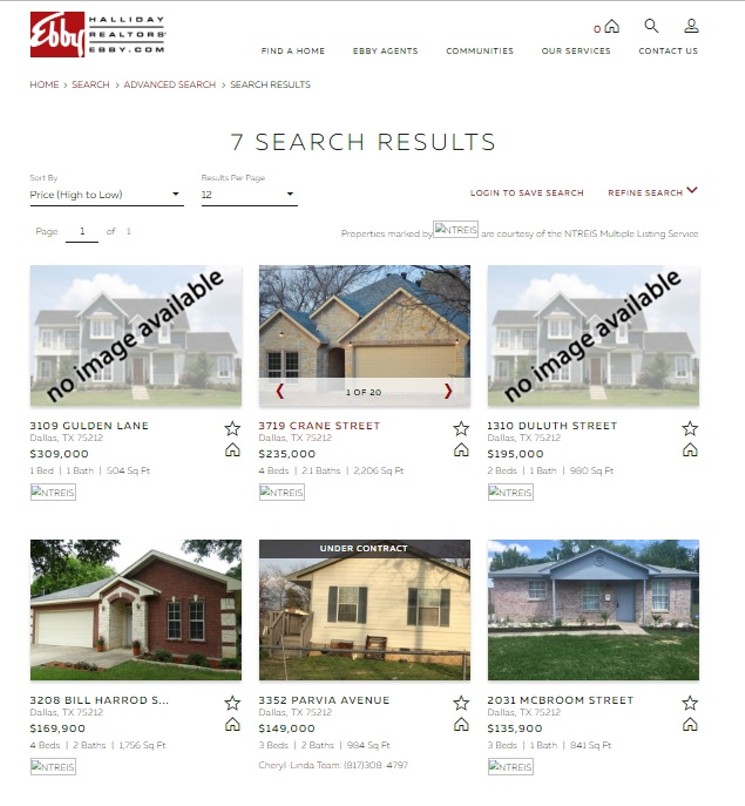 Nobody gets into West Dallas at tax appraisal values these days.
ebby.com
And, if you have been following this story or you know anything about West Dallas, you must be saying a big, “Whoa!” about now. Twenty million bucks for a bunch of old decaying rental properties in West Dallas?

After all, this whole story started when the Khraish family, looking at a tougher rental building code passed by the City Council last year, said their houses were too old and rundown to be brought up to the new code. Therefore, they said, they were taking the houses off the market, bulldozing them and preparing to redevelop the land.

So how can a bunch of tiny run-down houses be worth $20 million? In the first place, we’re talking about 263 properties. In the second place, as Khraish explains, the houses have no value. Zero. All of the value is in the land.

That dirt in West Dallas is the story – the clue that solves the entire mustache-twirling mystery. Last week Khraish and his associate, John Carney, urged me to go check it out for myself on real estate web sites like Zillow and Ebby Halliday.

It’s amazing. In an area where a house couldn’t sell for $15,000 two years ago, I found lots scattered across West Dallas for sale at asking prices from just below $80,000 to north of $300,000. I don’t know how many people get that money, but all of a sudden a whole lot of people sure seem to think it makes sense to ask.

The Khraishes have said from the beginning that they are not going to scrape their land and sit on it. They want to begin redeveloping immediately and have already hired architects and planners. They don’t want to build clones of the fancy high-rises being developed by Staubach and others. They say their plans call for an entire new community of affordable rents and senior living, which they say they hope will serve to hold the existing community together rather than run everybody off.

But even in doing that, they can’t ignore what their own land is worth. It has a certain asset value. There’s no reason why they would just give that away, when they can use it instead to redevelop.

The deal the mayor is pushing on the Khraish family works like this. The letter of intent says the land is worth $20 million. Khraish says that sounds right. Then the letter offers 85 percent of that value. He says that isn’t terribly unfair – a discount in exchange for a one-shot deal for everything. So now the letter is already down to $17 million, but Khraish tells me he is still reading.

Lost worth $6,000 to $12,000 two years ago are now on the market at asking prices 25 to 50 times more.
zillow.com
Then the letter takes its first nose-dive. It says the 85 percent figure is actually “less code necessary repairs.” In other words, 85 percent of $20 million, minus whatever it would cost to bring all of the houses up to code.

Khraish has said from the beginning that the houses cannot be brought up to code. They’re his houses. He should know. The only objective third-party expert to offer an opinion, Bill Hall, CEO of Dallas Area Habitat for Humanity, has said Khraish is right.

And, wait a minute. That $20 million figure from the real estate information service: that presumably is a market value. Now. It’s what the portfolio is worth as is. So why, in selling it, would the Khraishes agree to deduct from their selling price a repair cost that Khraish says “would go to infinity?”

The value, he says again, is not in the houses anyway. “I have never alleged that the houses have any value. The value is entirely in the land. That’s the real value, and everybody knows that.”

Aha. The letter of intent has another bump in it. It says that the purchase price will be the $20 million minus the renovation cost “or lot value,” whichever is greater. Khraish figures the first number, $20 million minus renovations, comes out somewhere around zero, since the only way to put code-compliant single-family houses on all those lots would be to haul the existing houses off to the landfill and build all new ones in their places. That leaves what the letter calls “lot value.”

Well, wait, that’s easy. Lot value is land value. If Khraish is right and land value is the only value anyway, then we’re back to $20 million, are we not? That’s what the real estate whatever said it was worth to begin with.

Ah, no. Not according to the letter of intent. The letter suggests a different lot value. It offers the Dallas County Appraisal District values as the lot values. These are values assigned by tax officials, predating the current wave of gentrification and inflation. These values for all 263 properties come to a total of $2,261,710.

Nobody – not me, not Khraish, not Carney – is accusing the would-be buyers of anything remotely dishonest or even unfair. Why not offer a guy $2 million for something you know is worth $20 million? He doesn’t have to take it. Might as well try. Faint heart never won fair lady.

Khraish does wonder why the offer came through the mayor. “If they [Jackson and Morgan] had an offer for me, why didn’t they just come make it to me themselves?”

But, as I said, I was not able to reach them at the end of last week, and it would be unfair to assume they know much or anything about the mayor’s history trying to use the strong arm of the city to get control of the Khraish properties.

I told the mayor’s spokesperson, Scott Goldstein, it was my impression the mayor had helped draft the “LOI” or letter of intent from Jackson and Morgan. Goldstein wrote back: “The mayor did nothing more than connecting Khraish with the folks at Residential Capital Partners and he was happy to do so. He did not help draft or modify the letter.”

The Dallas Central Appraisal District lists this property, on the market now at $80,000, as having a lot value of $1,200.
Zillow.com
When the mayor called Khraish, he said, “I saw an LOI earlier this morning, and they were going to make some changes to it. There were so many properties, they just need to structure the deal in a way that it’s simple to kind of take a look at it.”

He told Khraish he was expecting to see the revised letter at any moment. “I looked right when I got back on the phone. I told them to send me a copy at the same time, and I don’t see a copy yet, either.”

Jackson spoke to The Dallas Morning News, telling reporter Diane Solis, according to her story, that he had initiated the idea of approaching Khraish, not the mayor. Solis reported: “Jackson said Friday that he reached out first to the mayor, whom he said he had never met.”

The mayor told Khraish in his phone call to him: “Let me tell you what I’ve been doing … I was turning over different rocks to see who was in that market of home buying and found a couple of guys.”

“I have accused the mayor of a land grab,” Khraish said, “and he still is doing it. That just boggles my mind. Wouldn’t you think after I accuse him of it publicly he would at least step back?”

Apparently not. It all sounds crazy and makes no sense until you get to the clue. The dirt. It’s all about the dirt. Follow the dirt.