Pending potential amendments during the bill's final reading today, Flynn's plan, which would increase the city of Dallas' annual contribution to the fund, expand the pension's board, change the way seats on that board are allocated and change the way benefits are paid out to retirees.

Flynn's bill passed its second reading in the Texas House 132-0 with only one amendment, but it's a big one. As proposed by Dallas Representative Jason Villalba, the bill now reads that the pension board may seek to claw back interest payments made as part of the Dallas Police and Fire Pension System's Deferred Retirement Option Program.

Before Wednesday, the bill would've required the board to attempt to claw back DROP interest from pensioners who already received it. Now the bill doesn't demand that the board try to take the money back, just says that it can if it chooses to do so.

DROP guaranteed 8 to 10 percent interest to retirees who agreed to continue working and deposit their pension checks in accounts maintained by DPFP. Meeting this guarantee is what has made the fund an unsustainable fiscal nightmare.

DPFP Board Chairman Sam Friar said expressed gratitude to the legislature after the vote. "By supporting HB 3158 as approved by the House Pensions Committee, the legislators helped strengthen public safety while fulfilling the commitment to Dallas police and firefighters. We appreciate the enormous work by Chairman Dan Flynn and so many who made today’s vote possible," Friar said. 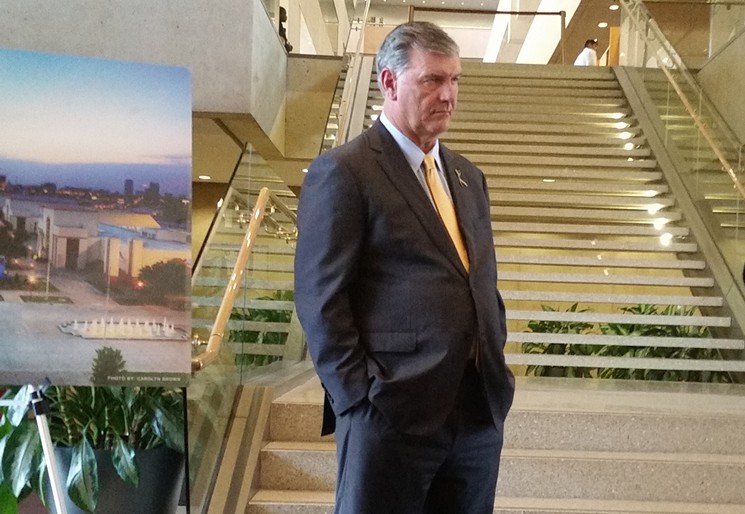 Mike Rawlings
Jim Schutze
Dallas Mayor Mike Rawlings has pushed back strongly against the version of the bill the House supported Wednesday. "The Flynn taxpayer bailout plan requires us to pay into the fund based on the number of employees the chairman thinks we should hire, for an unlimited number of years," Rawlings said, criticizing the $1.35 billion contribution increase Flynn's legislation requires from Dallas taxpayers.

Rawlings also disapproves of the bill's plan to split the 10 seats on the board evenly between choices made by the DPFP and the Dallas City Council, with an 11th member appointed jointly. The mayor feels that dividing the board without giving clear control to the city places the fund at risk for the type of mismanagement that created its current multi-billion dollar unfunded liability.

Last month, Flynn responded to Rawlings complaints about his bill by suggesting that the mayor "wants to take over the plan and drastically attack benefits by collapsing the plan."

Usually third readings of bills in the legislature are formalities, but there is a chance amendments proposed by Dallas state Representative Yvonne Davis submitted too late for consideration Wednesday could be considered on Thursday.

Details of Davis' proposed amendments were not available Wednesday night, but she told the Texas Tribune that she was just trying to limit the pain that would be felt by the city and its police and firefighters. "I’m hoping to give everybody some relief," Davis said.

After the bill passes its third reading Thursday, it will move on to the Texas Senate. Monday, the Senate passed a similar fix to Houston's failing pension system. During that debate, the Senate passed an amendment that provides for employees to be switched to a different retirement system if the current system continues to struggle. The DPFP has accused Rawlings of wanting the Dallas system to fail so police and firefighters could be switched to 401k based retirement option developed by the city.