From Oak Cliff to New York and Back to DFW, 'Walt Deezy' Has Big Plans For Dallas Coffee

Courtesy of Rosalind
Dee "Walt Deezy" Traylor pulling shots of his Ultralight Beans at Rosalind in Garland.
Dee Traylor’s exuberance can border on overwhelming if you’re not prepared for it. By the time you’re done introducing yourself, you’ll more than likely be enveloped in a massive bear hug. His nickname, Walt Deezy, is a variation of an earlier nickname, Easy Deezy, and Walt Disney, a company with a hospitality-centric nature and creative ethos that inspire him. Ask him about what coffees he’s got available and watch his eyes light up as he recites the day’s menu in detail.
Traylor was born in Oak Cliff. After losing his mother and grandmother in the same year, he was taken in by an adoptive family. His grandmother is the namesake of his company.

“I always told my grandmother that I wanted to buy her a mansion and get her out of the area we were in,” he says. “Unfortunately, I wasn't able to, so I honor her through everything I do.”

Like many within the coffee industry, Traylor had his introduction into the business through a job at Starbucks. “Relationships with guests kept me interested,” Traylor says. “After working for Starbucks, I wanted to learn more and more about coffee. I went to Texas Coffee School and instantly realized I wanted to own my own shop.”

From there, Traylor worked a stint at Oak Lawn Coffee before moving on to run the coffee program at Mercat Bistro. Eventually, he helped create a cafe for the Harwood brand and helped establish Magnolias: Sous Le Pont. In 2015, Traylor took a leap and moved to New York City, where he established Rosalind Coffee Roasters. 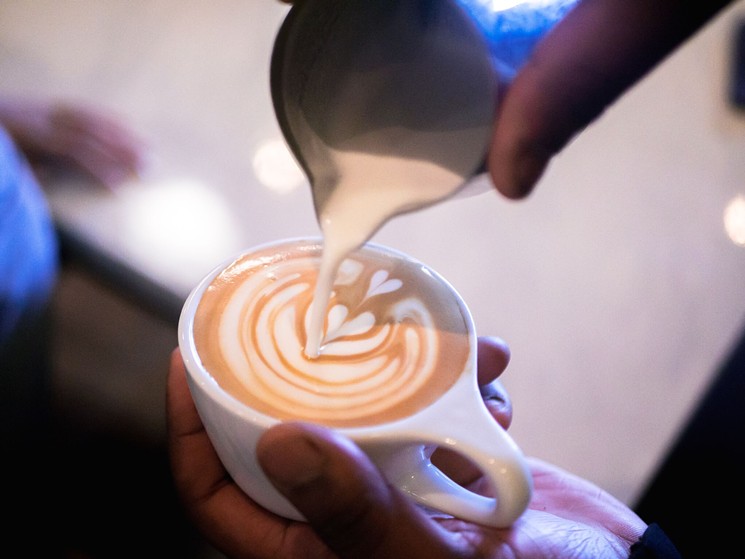 Traylor pours a cappuccino at newly rebranded Rosalind Coffee in Garland.
Courtesy of Rosalind
“I wanted to start my own legacy in the hardest market,” Traylor says. “I figured if I could make it there, I could make it anywhere. If I couldn't, I would have learned more about myself.”

Rosalind Coffee ultimately achieved some success in the Big Apple, nabbing some high-profile wholesale clients like Major League Baseball. When Traylor decided it was time to grow, he turned his sights back toward DFW, acquiring Garland’s Generator Coffee House & Bakery, which has since been rebranded as the first retail branch of Rosalind Coffee.

While Traylor says it has taken some time for Generator’s regulars to warm up to change, his brand’s reception in the area has been mostly positive. He’s also had time to observe some changes between markets in the two disparate cities from which he operates.


"In DFW, if you have amazing coffee, people will come from out of town." — Dee "Walt Deezy" Traylor

“New York City is fast paced and very expensive; 95 percent of your regulars either live or work by your location,” Traylor says. “People that are not in the coffee community will very rarely visit your shop if you are not in their routine, even if you are just one block away. In DFW, if you have amazing coffee, people will come from out of town.”

At the Garland cafe, the Rosalind team is serving up Ultralight Beans — a moniker Traylor adopted in homage to one of his favorite Kanye West songs — including blends and single-origin offerings.

The cafe also features a food menu covering breakfast and lunch. Breakfast includes items like breakfast tacos (2 for $5) and sandwiches with eggs, cheese and a choice of ham or avocado ($5.70). Lunch is fast and affordable, consisting mostly of sandwiches from grilled cheese ($3) to reuben on rye ($7.50).

Traylor is no stranger to grand aspirations. He hopes to open up to two new concepts in New York by the end of the year. Additionally, he has designs on further Dallas expansion, including another Rosalind Cafe, a training lab (classes have already started) and a shared space where coffee roaster startups can rent time on shared commercial equipment.