Lima Taverna, Hidden in the Back of a Strip Mall, Might Be Plano's Most Exciting New Restaurant

Kathy Tran
Lima Taverna's pescado a lo macho is a big, boisterous parade of seafood, almost all of it perfectly cooked.
The parking lot is getting barren at Collin Creek Mall. Anchor stores like Macy’s are fleeing, and although there are stores remaining — including Sears, Victoria’s Secret, an indoor mini-golf course and something called Amazing Jake’s Food & Fun — the mall’s southern end is growing forlorn.

This is not the place most Dallasites would expect to find an exciting new restaurant worthy of regional recognition. But Lima Taverna is bringing Plano fresh, exciting and elegantly plated Peruvian cuisine from an outbuilding on the south side of the mall’s parking lot.

To be fair, the restaurant is only technically new. This is its third incarnation after brief runs in summer and fall 2016 under the name Ñusta's Cafe and an earlier appearance in Arlington. The latest venture ended in a temporary closure to remodel and rebrand. Let's hope the new version sticks around for a long time. 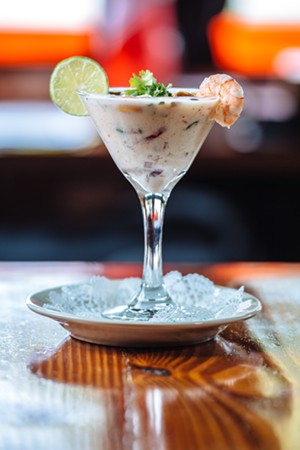 The classic ceviche ($14) is whitefish marinated in lime juice and served in a bowl with extras, including both plain and crunchy-toasted choclo, the Peruvian sweet corn that’s similar in size and texture to hominy. There’s also a ceviche mixto, adding shrimp and calamari.

This is a great place to get ceviche — especially for those who like cilantro — but there are other appealing appetizers, too. Lima Taverna serves up some of the best yucca fries in the northern suburbs ($9, though it doesn’t get you many), crisply fried to perfection and served with a Latin equivalent of remoulade. Anticuchos ($8) are a tribute to the grilled meat skewers served up by street food vendors, manager and part-owner Eliseo Figueroa says. Chicken is the standard here, but sometimes you get lucky and Figueroa offers grilled beef hearts. If he does, say yes.

Say yes, also, to just about any main course involving seafood. The staff’s recommendation is, justifiably, pescado a lo macho ($19), which — beyond being one of the world’s great dish names — is a big, boisterous parade of seafood, almost all of it perfectly cooked. The calamari might be merely good, but the tiny octopuses are scrumptious, the mussels are flawless and underneath the blanket of both small and jumbo head-on shrimp is a fillet of skin-on salmon that’s sheer bliss. Even under the gently creamy broth that’s humbly described as “a seafood sauce,” the salmon retains some of the crispness of its sear.


"If some poor fool still thinks that intriguing new restaurants need to be in trendy neighborhoods, take them to Lima Taverna and see if a spoonful of leche de tigre will change their mind."

So Lima Taverna has some of Plano’s best fish. And maybe surprisingly, it has one of Plano’s best pork chops, too ($15). The thick, bone-in cut tastes like classic backyard grilling, and it comes with yellow potatoes bathed in a sauce that, with its undertone of ginger, hints at Asian influences in Peruvian cooking.

Not everything achieves  such a high level. A pasta dish called tallarines verdes con asado ($14) offers both good and frustrating surprises. The noodles are tossed in a pesto that’s a face punch of strong garlicky, spinachy, slightly bitter flavor. It is to ordinary basil pesto what Superman is to Clark Kent; serious pasta fans will go crazy. On the other hand, the accompanying slices of asado meat, however nicely sauced they are with a blend of chiles and spices, are tough, cheap cuts. Maybe ask for a vegetarian portion.

Causa limena
Kathy Tran
One of the main sauces here is based on aji amarillo, a Peruvian pepper that is a distant relative to the bell pepper family. It’s only a little bit spicy, though as with jalapeños, there’s some variation to the heat level, and it has a sweeter, more delicate flavor than bell peppers. Aji amarillo isn’t the boldest or wildest flavor around, but it forms the basis for one of the restaurant’s core sauces.

Try it on papas a la huancaina ($8), a sort of cold potato salad, or on aji de gallina ($14), an almost-stew of chicken, potatoes and aji sauce. The chicken dish is subtle and unflashy — both in its flavor and in its pale yellow color — but the pepper sauce, which also has a good amount of Parmesan, plays tricks on palates unfamiliar with Peruvian food. The sweetness and complexity of flavor had us momentarily convinced that there was crabmeat hidden in the dish.

There are other things to like about Lima Taverna besides the food. Service is slow — in part because the staff is so small — but usually comes from Figueroa, who's especially helpful for those looking to try the cuisine for the first time. The dining room is tastefully decorated, with Quechua words written across the ceiling. The bar makes damn good pisco sours ($10). And the kitchen’s plating skills reveal its pride.

In other words, this is the kind of small business you love to cheer for. Its owners are passionate, its style is invigorating and, most importantly, its pescado, pork chops and ceviche are terrific.

Lima Taverna’s biggest disadvantage, so far, is its out-of-the-way location on the backside of a strip mall near a hopelessly untrendy shopping center. That must be why the Plano crowds didn't find the restaurant's first incarnation and don't appear to have found it this time, either. Let's change that. Let's spread the gospel of pescado a lo macho.