Mike Brooks
Almost every song from The Joshua Tree was supplemented by powerful and compelling videos with visuals left for the audience to interpret.
U2
with the Lumineers
AT&T Stadium, Dallas
Friday, May 26, 2017

In 1849, French writer Jean-Baptiste Alphonse Karr wrote, “Plus ça change, plus c’est la même chose.” The phrase essentially translates to: The more things change, the more things stay the same. Friday night at AT&T Stadium, U2 proved just that by bringing life to a 30-year-old album.

When U2 released The Joshua Tree in 1987, it was a time when some of the U.S. was politically divided under President Ronald Reagan’s administration among other sociopolitical turbulence around the world. Thirty years later and with more than 25 million album copies sold, the album remains oddly relevant as the U.S. is politically divided again under a different administration and other global turmoil such as the problems in Venezuela, the Syrian refugee crisis and most recently an ISIS-led attack on Ariana Grande’s concert in Manchester.

“It was a period [the 1980s] when there was a lot of unrest,” U2’s lead guitarist The Edge said in a recent interview with Rolling Stone. “It feels like we’re right back there in a way. I don’t think any of our work has ever come full circle to that extent. It just felt like, ‘Wow, these songs have a new meaning and a new resonance today that they didn't have three years ago, four years ago.’”

The show at AT&T Stadium was the seventh stop on the group's 2017 The Joshua Tree Tour, which commemorates the 30th anniversary of the album. The show was opened by the Lumineers, who played a 50-minute set including hits such as “Ho Hey,” “Ophelia” and “Stubborn Love.”

Mike Brooks
A quarter past 9 p.m., the members of U2 walked out one by one onto the B-stage – shaped to look like a tree's shadow. The band didn’t waste time firing up the crowd, opening with the high-tempo “Sunday Bloody Sunday.”

The show was essentially played in three acts: the opening (which consisted of four hits), The Joshua Tree (played in its entirety from beginning to end) and the encores (there were two).

During the opening set, as the band performed “Pride (In the Name of Love),” Bono took the opportunity to let his intentions for the night be known: He wanted to use the concert as a chance to reach out to all fans – whatever their politics might be – and show them that they can accomplish more when they work together.


"For the left and the right and all of those in-between: Sing. "

“For those holding on to the American dream: sing,” Bono said. “For the left and the right and all of those in between: sing. We will find common ground and seek higher ground.”

Although most of Bono’s political messages throughout the night were overt, others were much more discrete. For example, during “Pride,” the words of Martin Luther King Jr.’s “I Have a Dream” speech scrolled across the 200- by 45-foot screen.

Almost every song from The Joshua Tree was supplemented by powerful and compelling videos with visuals left for the audience to interpret. During “Where the Streets Have No Name,” the video was a one-shot traveling down a desert road. Occasionally someone would appear walking down the road, leaving the audience to wonder if the people on the screen were immigrants or refugees, or if some other misfortune had caused them to walk through a desert alone. 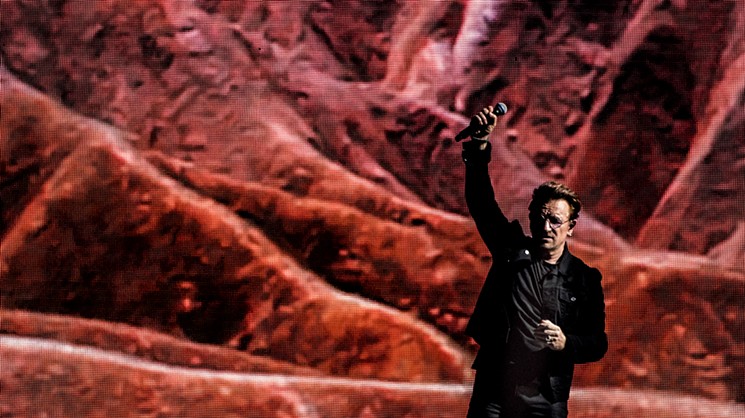 Other messages were tongue-in-cheek, like a short clip played from the 1950s TV show Trackdown about a conman named Walter Trump who tries to convince a community that he can build a wall around their homes “that nothing will penetrate.”

Bono also showed respect as a visitor in the U.S. “From an Irish perspective, thank you for letting us into your country for hundreds of years,” the frontman said. “The U2 group does not forget that we are guests in your country.”

To kick off its encore, the band played “Miss Syria Sarajevo.” The song was accompanied by a video commissioned by French artist J.R., shot at Zaatari Refugee Camp in Jordan, where more than 80,000 Syrians have sought shelter. Several audience members were brought to tears watching the video, which highlighted the suffering of Syrian refugees and their faith in the American Dream.

As the encore continued, Bono gave a brief speech about the fight against HIV/AIDS. He thanked former President George Bush and his wife, Laura, for their commitment to the cause during his time in office. (Bono spent some time with President Bush at Crawford Ranch a few hours before the show Friday.) The left and the right can accomplish anything if they are one, he said, before performing “One.”

Celebrites like Chip and Joanna Gaines of HGTV's Fixer Upper came out for the show.
Mike Brooks
U2 ended the night with three consecutive hits: “Beautiful Day,” “Elevation” and “I Will Follow.” With these three songs, the audience exploded as fans in the stage area and in the stands jumped and bopped along. The sold-out AT&T Stadium sang as one to the encore, with arms raised in the air.

“These songs mean so much to us,” Bono said as the evening wrapped up. “After all these years, that they still mean something to you is shocking and wonderful. Thank you for giving us such a great life.”

After two shows Saturday and Sunday at Soldier Field in Chicago, U2 travels to Pittsburg before playing at Bonnaroo Music Festival. U2 will crisscross around the U.S. before playing shows in Canada and across Europe in the second half of 2017. By the conclusion of the tour, U2 will have played to more than 1.7 million fans during 33 shows.