If the show must go on, the star of Free Press Summer Fest last weekend was Post Malone.

After severe weather delayed the show by nearly two hours Saturday, the Grapevine native took the stage in front of a rain-soaked audience and gave one of the day's best performances. His 40-minute set, which began at 8:30 p.m. at Houston's Eleanor Tinsley Park, had the audience eating out of the palm of his hand.

Attendees were indifferent about requests to leave the park. Many took refuge under overpasses until being forced to leave the grounds for safety measures. A mass of people gathered outside the entrance gates, sure that the festival wouldn’t be canceled for the night. Around 8 p.m., anxious crowds flooded (pun intended) back inside, and a half hour later Post Malone — née Austin Richard Post — saved the day.

Post hyped up the crowd all night long, saying fans could sing along if they knew the words and throw up two fingers on the opening song, “Too Young.” The masses were happy to oblige him. He bragged about feeling as popular as NBA star Monta Ellis while onstage before going into “Monta” from his Aug. 26 mixtape. Post even got cheers after asking the audience to get sappy with him on “I Fall Apart” and “Up There.” 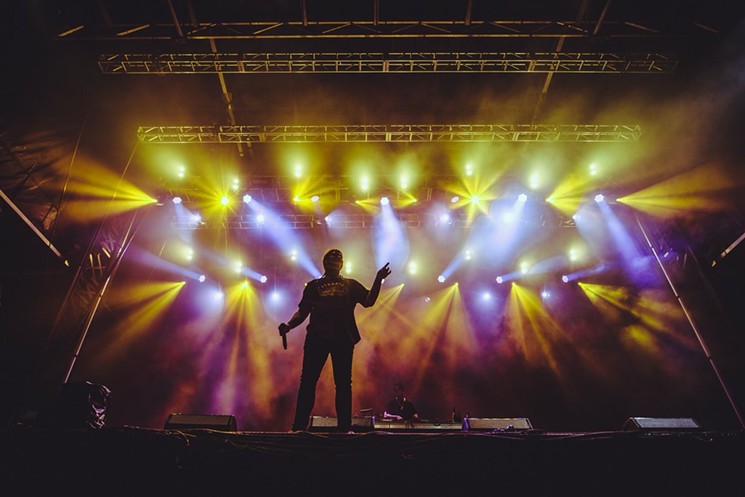 His two biggest radio hits, “White Iverson” and “Congratulations,” were, of course, at the very end of the set. Those two songs received the loudest reactions of the night. Producers Pharrell and DJ Mustard also got shoutouts for their work on the songs “Up There” and “Big Lie," respectively. Both are from Post’s debut album, Stoney.

“The vibe he was giving off was super chill, but he was also keeping it lit!” said Natalie Orozco, a 27-year-old Houston native. “‘Congratulations’ is my favorite song of his, and he definitely killed that performance. It was awesome.”

Post's voice held up throughout the night, although he was drinking cold beer and smoking cigarettes during his performance. Unlike other rappers who partied and played during the soggy day of music, he won the crowd's adoration and kept its attention during the entire show.

Before going into “Deja Vu,” Post brought up his Twitter beef with Starlito, saying that he sees “some people talking up their cars and pretty ladies on social media,” but when he sees them on the street, they’ve got nothing. He also gave a shout out to Lil Uzi Vert, which was met with boos from the audience — Lil Uzi Vert had failed to show up for his set earlier in the day.

To quote the rapper, Post got his at this show.