Dallas City Manager T.C. Broadnax's Promises of Transparency to Be Put to the Test

Sarah Passon
Ben Sandifer has doggedly pursued the matter of the Trinity Forest Golf Course crater for three years.
It has taken a while — half a year — but it looks like we are finally about to get our first good rubber-meets-the-road test of Dallas' new city manager and new city attorney. Until now, they’ve been all about pretty talk and deck chairs.

Both the new manager, T.C. Broadnax, and the new attorney, Larry Casto, have been saying all the right things: a new day at City Hall, spring cleaning, transparency, responsibility. Ah, yes. What else were they going to say?

Now we’re about to get a sense of the mettle. We’ve seen them hit the slow pitches. Now we’ll see what they can do with some smoke.

Activist Ben Sandifer, respected in environmental circles for both tenacity and sound judgment, has brought an open-records issue dealing with the Great Trinity Forest to a point of focus. In response to Sandifer’s complaints, the Texas attorney general has notified the city that the AG may bring legal action against Dallas to force it to produce documents dealing with the Trinity Forest Golf Course, an exclusive private club the city is allowing investors to build on undeveloped public land near the Trinity River.

Before we get too deep into the forest, let me cut to the chase and tell you what makes this issue hot for the city: Sandifer is demanding a document he already has.

We won’t talk about how, but he has in his possession a piece of correspondence in which a key city executive attempts to shut down an important law-enforcement process. If this reminds you of anything going on in Washington, yes, it’s the same issue: Did someone at City Hall use the brute force of office to kill an investigation, and do the events in question amount to some kind of obstruction?

This involves a massive 20-acre, 20-foot-deep excavation gouged out of the Great Trinity Forest in 2014 by a contractor who saw the forest as a source of cheap fill-dirt for the 400-acre golf course the city is allowing AT&T and other investors to build. Former Dallas Observer staffer Eric Nicholson chronicled the appalling saga of the crater when naturalists and citizen activists discovered it in the forest in 2014. He also covered the city’s abysmal failure at the time to hold anyone responsible or do anything to repair the damage.

The U.S. Army Corps of Engineers, which has overall dominion over the river through that area, found various ingenious arguments to get itself out of doing anything — surprise, surprise — but it turns out that didn’t get the city off the hook. Sandifer, who has doggedly pursued the matter of the crater since it was found, has been keeping track of an enforcement procedure the city agreed to in a consent decree signed with the U.S. Environmental Protection Agency in 2006.

Under those provisions, the city agreed to hire five special stormwater runoff inspectors to make sure the city was properly enforcing regulations designed to protect against flooding, erosion and certain kinds of damage to the land. The inspectors also were charged under the decree with making sure the city wasn’t violating the rules.

As Sandifer has learned from a series of open-records demands, those inspectors have been slamming the city — their employer — with monthly inspection reports saying that the city has done nothing to repair the catastrophic environmental damage at the golf course borrow pit.

An official notice of violation last August states: “At the time of this inspection onsite today, no visible indication of initiating permanent stabilization is apparent onsite.”

Then the following month: “At the time of inspection onsite today, no visible indication is apparent onsite of any operator initiating stabilization, no stabilization work is apparent.”

These are violations for which the city would slam a private party with fines of up to $2,000 per notice. Special provisions in the out-of-court settlement with the EPA in 2006 provide a mechanism by which the stormwater inspectors, when filing a violation against the city, turn their notices over to a specially designated assistant city attorney, who, under the terms of the settlement, is supposed to prosecute them if the city fails to cure the problem. None of the multiple notices turned over to the City Attorney’s Office has been prosecuted.

In fact, far from curing anything at the golf course crater, Susan G. Alvarez, assistant director of the Trinity Watershed Management Department in charge of floodplains and drainage, sent the inspectors an email last August in which she basically told them to buzz off and stop bothering her:

Alvarez provides an argument about why she thinks there is no violation.

I attempted yesterday to contact Alvarez; her boss, Sarah Standifer; the city manager and the city attorney. I explained to all of them what I would be writing about. I heard back from none of them.

The immediate issue isn’t even about the borrow pit. Sure, it would be interesting to know why Alvarez tried to shut down the inspectors instead of allowing the inspection process and the notices of violation to proceed through regular channels, which would have happened if the city had been inspecting a private party. Private parties, after all, don’t get to send emails to the city’s inspectors telling them they’re full of it and to stop sending notices.

It would be interesting to know how this behavior comports with the city’s obligations under the consent decree with the EPA, but those are not the most interesting things in this situation.

The really interesting thing is that the city signed and submitted an official certification to the Texas attorney general saying it had provided Sandifer, the activist, with all the documents responsive to his demand under the Texas Public Records Act. But that was not not true.

The email in which Alavarez puts the arm on the stormwater inspectors is conspicuous for its absence from the rest of the emails the city gave Sandifer. It has been plucked out of the stream.

You have noticed by now that I am not saying anything about why or how Sandifer has this email. That is by design and my agreement with him to protect sources. But I have seen the email, and I find it extremely hard to believe there is anything fake or forged about it. In fact, you can almost infer its existence from the other emails in the same stream.

That email is a smoking gun for so much more than the borrow pit alone, as if that would not have been enough. This is all Trinity River project stuff — the Rosetta Stone of the old power elite in Dallas.

Standifer, Alavarez’s boss, is the main driver for the Trinity River Project, which, of course, is still centered on the old elite’s ultimate dream of a major new highway along the river. Standifer is almost the last member of the previous regime still standing — a person for whom the qualifications for her job had to be lowered so she could move into it after the previous city manager departed.

Everything about the borrow pit screams the culture of the old elite: We will build what we want when we want how we want and where. Naturalists and environmentalists are tree-hugging hippie fools. Court-imposed conditions are a joke. What counts is a world-class, super-expensive golf course for rich people. The forest itself is a dump. And anybody who works for this city and hopes to keep working for this city had better figure all of that out in a hurry.

None of that surprises Sandifer, the activist, nor would it surprise any of the activists who have dealt with City Hall for years on these issues. It certainly doesn’t surprise me. It’s exactly what I would expect. But all of it flies directly in the face of what both Broadnax and Casto have been promising the public — especially Broadnax. 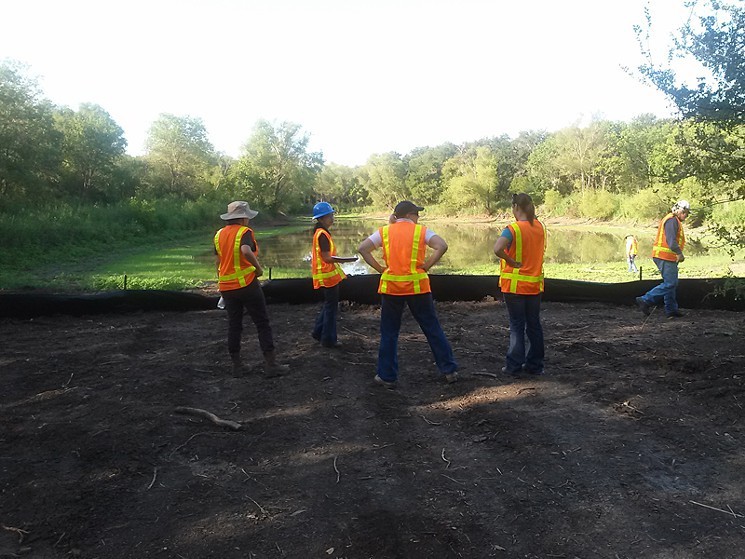 City employees have presided over the serial devastation of the Great Trinity Forest, covering their traces as they go.
Eric Nicholson
The underlying behavior — trying to shut down the inspection process — may be a violation of law. Certainly withholding a document the city was legally required to provide is a violation.

But worse, was the document destroyed? When Sandifer began pursuing it in earnest, did anybody try to erase it from the city’s system?

Before the city’s public information officer signed a certification to the attorney general swearing she was providing Sandifer with “all existing responsive information,” did she speak to the person responsible for plucking the smoking-gun email out of the email stream? Did that person tell her about it?

And what is Broadnax going to do about it? If he hasn’t had a chance to get personally acquainted with the powerful patrons of the Trinity River project, he will the minute he puts a glove on Standifer of the Trinity Watershed Management Department.

Ah! Excuse me! I must inhale deeply! Don’t you love the smell of rubber meeting the road in the morning?