Are Fort Worth Record Stores Worth the Drive?

courtesy Jim Vallee
Dreamy Life, tucked into a community library, regularly hosts happy hours featuring local bands and beer.
Dallas has seen an explosion of record stores in the last few years, and at least two of the new businesses — Spinster and Josey — have already seen such success that they're expanding to other states. But while there's no shortage of places to buy vinyl in Dallas proper, you'd be missing out on some of North Texas' finest record stores if you neglected to check out the similarly growing scene in Fort Worth. Here are four record stores there that are well worth the gas money. It’s 8 p.m. on a Tuesday, and just as John Perez is about to close Born Late Records & Tattoos, a firetruck parks outside. A fireman hops out then rushes through the entrance. There’s no fire; he’s here to buy records.

Born Late Records & Tattoos, which opened two years ago, is a crate-digger’s paradise.

“We carry a lot of hard rock because it’s our forte,” Perez says. “But of course, we would never turn our noses down at a Carpenters record or a Commodores album.”

Posters line the ceiling as you weave from room to room, past rows of Playboy magazines and rare DVDs. One of the side rooms has a wealth of collectibles. In one glance, there’s a ZZ-Top belt buckle, a Funkadelic T-shirt, a vintage leather poncho, a Lamar Odom action figure and a Smashing Pumpkins concert poster.

Perez, who also manages bands on tour, is an industry warhorse with an encyclopedic knowledge of music; he's devoted to records the same way a librarian is devoted to books. Perez and the shop’s co-owner, Henry Vasquez, met in 1996, when Vasquez was the drummer of the metal band Archie Bunker. Perez owned the record label that released Lucky 13, the band’s only full-length album. Shortly after, Perez and Vasquez began selling CDs and memorabilia on eBay. They had been in business together for years by the time they moved into the brick-and-mortar.

As they put together the shop, they were struck by an idea.


"This is like a book in a library. It’s a document; it’s a testament to a certain time period and the music that surrounded this artist’s work at the time." – Born Late co-owner John Perez

The tattoo parlor is at the back of the store. Paintings, statues and masks vine along its turquoise walls, angled down at a pink vinyl barber chair in the middle of the room. Tattoo artist Brittany Elliott, who owns the tattoo parlor, had a successful run on the reality show Best Ink. Elliott also designs music-themed tables. She painted the murals on the side of the building.

The name “Born Late” came from the seminal metal record Born Too Late by Saint Vitus, whom Vasquez has played drums with since 2009.

“All three of us feel like we were born late, so we took the name," Perez says.

The shop sits in the middle of Race Street, which is being renovated into an “urban village.” Restaurants, boutiques and specialty stores are popping up all around it. Within the next year, the east Fort Worth neighborhood will look completely different.

“This area is becoming a go-to spot in town," Perez says.

The firetruck is still parked outside, with three firefighters waiting patiently for their colleague, who’s thumbing through stacks of vinyl in battalion pants, a Fort Worth Fire Department T-shirt and rubber boots. After browsing for a while, the fireman approaches Perez, and they dive into a discussion about the merits of vinyl records.

“Records are good for you,” Perez says, a wall of vintage snare drums behind him. He speaks quickly and smiles often, able to add laughter naturally into the conversation.

He holds up a Danzig album.

“This is like a book in a library. It’s a document; it’s a testament to a certain time period and the music that surrounded this artist’s work at the time," Perez says. "And there’s a sense of ownership that comes with that: You bought something, now this is yours. Now this Danzig record is yours to hold, cherish and listen to.” He smiles. “And when you put it on the record player, there’s something about it that brings people together.” 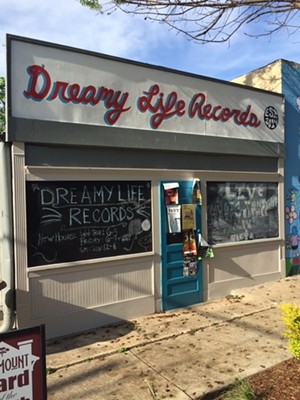 Dreamy Life Records & Music lives up to its name. First, you see the wild blue mural out front; then you step into a room full of books and couches. When you’re there, everything feels calm and serene.

It’s a recording studio, record label and venue all at once, and it’s inside the Fairmount Community Library, where people can hang out and drink coffee and listen to records. It also sells guitar strings and drumsticks. In Fort Worth's Southside, the volunteer-run library is a bastion of the Historic Fairmount District, a couple of blocks from Magnolia.

The selection is a carefully curated meld of classic punk and new wave, with everything from folk to hip-hop mixed in. Love of music is what has guided owners Jim Vallee, Britt Robisheaux, Cameron Smith and Robby Rux.

“We focus on local music and cutting-edge new releases,” Vallee says. “But we’re more than a Fort Worth label; we’re more of a North Texas label — bands like Loafers, Sub-Sahara, Pearl Earl and Teenage Sexx.”

The label’s Group Therapy compilations feature the best local underground musicians. Volume 4 is coming out soon. Dreamy Life takes care of the local scene — like Schuyler Stapleton, who recently began working at the store, and whose band, Bitch Bricks, is on the Dreamy Life label.

“We give the Happy Hours to bands who are up-and-coming in the area.” Dallas trio Teenage Sexx had its most recent album release at Dreamy Life.

“The money we make at the record store goes back into promoting bands,” Vallee says. “It’s a collective thing.” Turn into the Fort Worth Stockyards and bounce down the red-brick road past petting zoos and steakhouses. Nestled in among souvenir shops and beef jerky outlets is Chief Records. You can sip a beer while you browse through Johnny Cash and Townes Van Zandt albums.

The shop feels right at home and out of place at the same time.

“Sometimes people walk in and say ‘Why are you selling this vinyl? Nobody has a record player,’" he says. "I tell them that more people have them now than they did back then. You just had the big consoles back then. Now the kids can carry turntables around in a suitcase.”

For 20 years, the shop was home to the Fort Worth branch of the Ernest Tubb Record Shop. Founded by Grand Ole Opry star Ernest Tubb, the Nashville-based record store specializes in country, bluegrass and gospel. When the Fort Worth location went out of business three years ago, longtime customer Laura Croy bought the shop.

“She saved all the records,” Underwood says. “And in the last few years she has really grown the inventory.”

Croy and Underwood are very selective about the records they stock. They’ve amassed an impressive collection of country music LPs. In addition to preserving the Ernest Tubb Record Shop’s country roots, Croy and Underwood have incorporated a variety of other genres. Merle Haggard records are just across the aisle from rare Flaming Lips LPs and Dixie Cups re-issues.

Chief Records also boasts an array of new releases by musicians who often don’t get their due attention in other record stores, like Bonnie Bishop, Jason Isbell and Chris Stapleton, the shop’s top seller. There are also plenty of local musicians in the racks, such as Cody Jinks, Leon Bridges, Charley Crockett and Cut Throat Finches of Dallas label Hand Drawn Records.

“People from all over the world wander into this store,” Underwood says. “They come to the Stockyards as tourists and don’t expect to find a record store. And when they leave, a lot of them ask, ‘Now how do I get these records home?’” 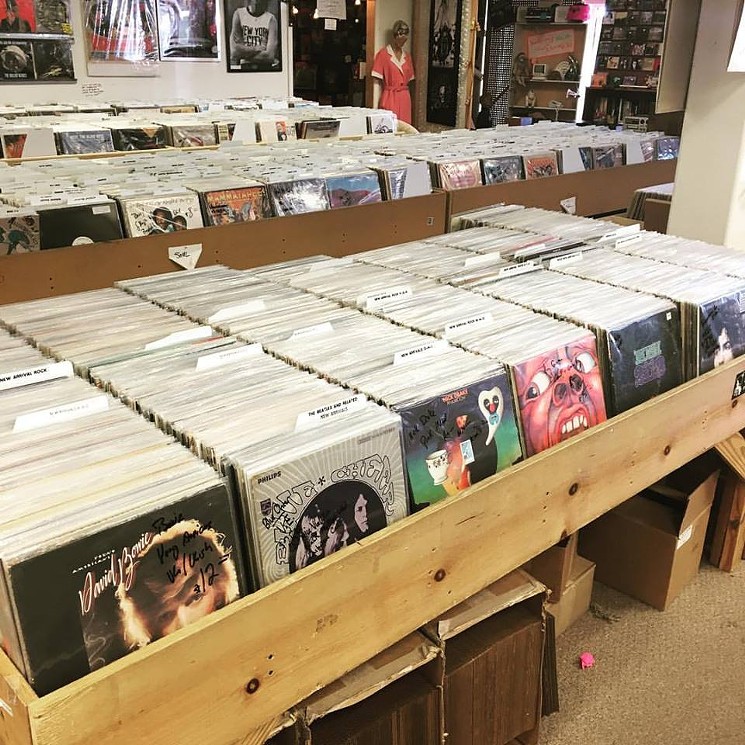 “We needed a short name for the store because signs are really expensive and we didn’t really have any money, so we came up with Doc’s.”

In the 10½ years since Jenkins Boyd started Doc’s Records & Vintage with his dad, the store has become known throughout the North Texas area for its excellent selection, which resembles Boyd’s personal collection.

“I listen to Latin-jazz if I’m trying to relax,” Boyd says. “If I have people over and we’re playing records, I play a lot of garage and funk and soul. It’s a little of everything.”

Doc’s is also known for having tens of thousands of records. Boyd is humble about it.

“I’m constantly trying to figure out where things are going to go. There’s a lot of stuff that I don’t know why I have. I just ended up with it, and I can’t bring myself to give it away, so I keep it around. But it’s fun stuff, so why not?” he says.

Boyd hints at the possibility that the store could be moving to a larger space in the next couple of months. “I should know for sure pretty soon,” he says.