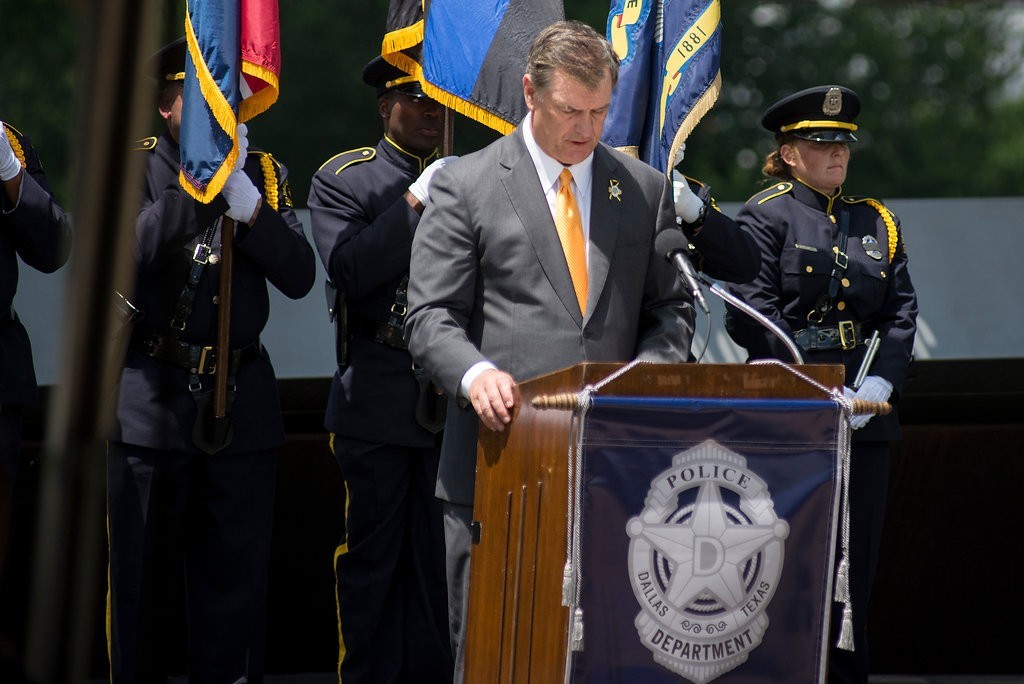 Brian Maschino
Mike Rawlings spoke at the Dallas police memorial service earlier this year.
As is ordained in the city charter, the first Monday following the 30th calendar day after the final canvass of the general election is Dallas' inauguration day. The city's 14 City Council members and mayor each took an oath of office at the Morton H. Meyerson Symphony Center in the morning before taking care of new council housekeeping in the afternoon.

Monday's festivities were more than just ceremony, however. Dallas Mayor Mike Rawlings, fresh off losing three of his strongest allies on the City Council, laid out his vision for the next two years to a council that seems ready to fight him at every turn.

Rawlings began his remarks by invoking his role in the resolution to the end-of-January standoff created by President Donald Trump's executive order banning immigration from several countries in the Middle East.

Dallas' response to the order — protesters and lawyers flocking to D/FW Airport, politicians greeting formerly stranded travelers, the mayor's very public apology for the situation — is evidence of what Dallas has become, the mayor said.

"Once again, when our city was faced with that question, we showed what Dallas stands for: tolerance, equality and respect for 'the other,'" Rawlings said.

The mayor pointed to Washington and the Texas Capitol in Austin as places where "others" are not treated as well by government officials, noting that Trump has questioned the commitment of NATO allies and eyed the renegotiation of U.S. trade deals. Closer to home, he spoke about the Texas Legislature's focus on undocumented immigrants and transgender Texans.

"It has created what I’d call boogeyman politics, motivated by unfounded fears and discrimination against our most vulnerable citizens," Rawlings said. "Rest assured, danger doesn’t lurk in our public restrooms. Our Latino brothers and sisters are not criminals, and our local police officers have far more important things to do than act as immigration agents."

Rawlings identified three issues facing the city as priorities for which the council must come together: the park slated to be built between the Trinity River's levees, the open question of Fair Park and the best way to spend Dallas' $3 billion budget.

"If we want to, we can perpetuate a belief about a clear divide between old Dallas and new Dallas," he said. "But we have no real choice; we all must embrace a new Dallas."

The mayor left unsaid the issues that have helped lead to a divided council in the first place. The mayor's most significant opposition on the council, the five-vote coalition of Scott Griggs, Adam Medrano, Omar Narvaez, Mark Clayton and Philip Kingston has been bonded largely by opposition to building a tollroad and the park between the levees. The mayor, his donors and his allies loudly support the plan. It was the mayor's push to place Fair Park in the hands of a private foundation headed by former Hunt Oil CEO Walt Humann, too, that made Fair Park a galvanizing issue on the council.

Coalition building will be more interesting and require more compromise than on any of the three previous councils that served with Rawlings.

After Rawlings' speech, the council returned to City Hall to divvy up spots at the council horseshoe and elect a new mayor pro tem and deputy mayor pro tem to replace Monica Alonzo and Erik Wilson, both of whom lost their reelection bids in June runoffs. Medrano's council colleagues elected the third-term downtown, Deep Ellum and Oak Lawn representative as mayor pro tem. Alonzo's mayor pro tem seat, meanwhile, will be filled by Dwaine Caraway, who defeated Carolyn Arnold in District 4 to return to the council after being forced out by term limits in 2015. This is Caraway's second bite at the mayor-pro-tem apple. In 2011, following Mayor Tom Leppert's resignation to seek the Texas' Republican Senate nomination and before Rawlings' election in May, Caraway briefly became the mayor. If Rawlings fails to complete two full terms — a distinct possibility, given Dallas' recent historical precedent of mayors resigning during their second four-year terms — Caraway will briefly take over the reins again.