Chris Wolfgang
Shake Shack's Hot Chick'n and so-called spicy fries look the part. But looks aren't everything.
When any restaurant import lands in Dallas, locals flock to the grand opening, then move on to the next trend. Shake Shack was no exception. It's been almost a year since its opening, and Shake Shack seems to have settled nicely into DFW's burger scene with two stylish locations serving up right-sized burgers and crinkle-cut fries to slightly more reasonable-sized crowds.

We also appreciate Shake Shack's efforts to spice up its menu. When the Shack-meister barbecue burger joined the menu earlier this year, we found it to be not-quite-legit barbecue but still a solid burger choice. So when the email landed in our inbox earlier this week announcing a new Hot Chick'n sandwich at the Shack, naturally we perked up. The email also tipped us off to a secret menu item, spicy fries, and we quickly found ourselves at the West Plano Shake Shack, ready to feel the burn.

There's something about ordering an off-menu item that makes you feel privileged and powerful, like you know something that nobody else does. Nothing erases that feeling faster than the woman on the other side of the counter telling you she has no idea what you're talking about.

"Sorry," she explained, "we don't have spicy fries. Is that something from another Shake Shack?" It looked as if I would have to settle for a Hot Chick'n and regular fries instead. Disappointed, I took my seat, only to have our order buzzer start buzzing suspiciously early. Back at the counter, our order taker had good news.

The secret to ordering these fries at Shack Shack is to ask for extra seasoning.
Chris Wolfgang
"I asked my manager about spicy fries, and he said we do have them," she cheerfully said. "You want those instead?" I nodded in approval, and all felt right with the world, if only for a little while. I went back to psyching myself up for the eventual spicy goodness.

Shake Shack's Hot Chick'n ($6.29) is purportedly "dusted with a guajillo and cayenne pepper blend," and when our order arrived, the sandwich certainly looked the part. The breaded cutlet had a noticeably darker and more reddish color than the regular Chick'n Shack. Based on my last hot chicken experience at Helen's in Lewisville, that color is usually the sign of some seriously spicy bird, and I was glad I had ordered a West Slide ($4.65), a strawberry shortcake concrete custard, to cool the palate. The crinkle fries ($2.99) had a light dusting of this red, spicy mixture, too. At about this point, I became acutely aware of extra saliva building up in my throat, as if my eyes had told my brain to take appropriate precaution. 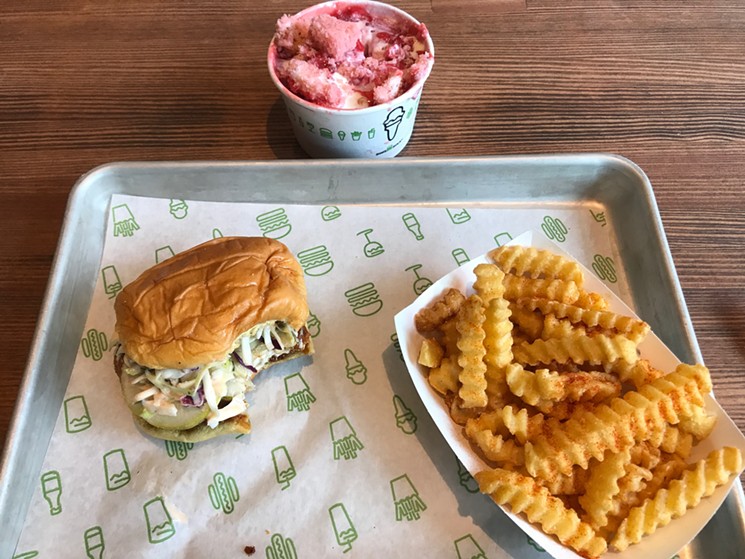 Two bites in, it was evident that concrete custard wasn't necessary. But we ate it anyway.
Chris Wolfgang
I needn't have worried. The Hot Chick'n is hot in name only. Sure, the usual chicken goodness was there, just as with previous Shake Shack experiences. But at best, the spicy version left only a mild tingle on my tongue. That said, it's still a good chicken sandwich. Like its mild menu-mate, the Hot Chick'n comes on the same soft potato bun with crisp pickle slices, but it subs in a creamy coleslaw that adds a tasty, cooling crunch. It's fast food but on a slightly elevated level.

The spicy fries suffer the same fate as the chicken — still tasty, just not as spicy as we expected. About halfway through the meal, a Shack Shack employee whom I took to be the manager passed by my table and noted that I got the spicy fries I had asked for.

"What do you think?" he asked, mentioning that they're his new favorite. They were good, I said, but could be spicier, as could the sandwich. He suggested asking for a side of the spicy seasoning next time, then mixing it with hot sauce and ketchup to satiate my spicy desires. With the solid chicken sandwich foundation already in place, Hot Chick'n's shortcomings are nothing a little education in Nashville couldn't fix, like a spicy finishing school. It doesn't need need a spice knob cranked to 11, but turning it past two wouldn't hurt either.