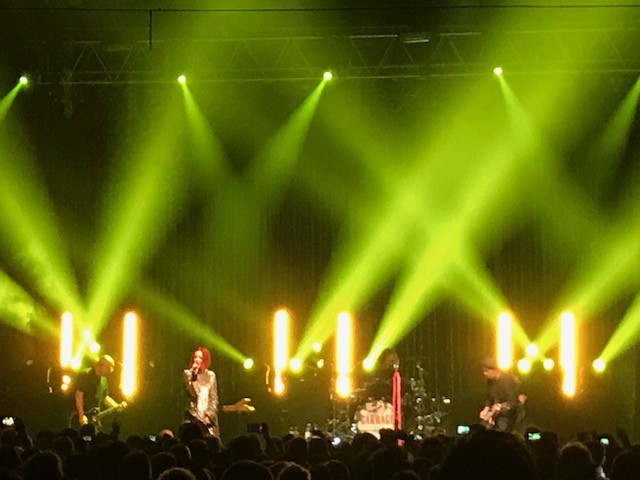 Jeff Strowe
Garbage performed at South Side Ballroom on Saturday night.
Blondie and Garbage have a lot in common. Both bands have frontwomen who blazed trails in their respective genres. Blondie’s Debbie Harry is a feminist icon who rose out of New York City in the '70s, much the same way Garbage’s Shirley Manson did 20 years later during the grunge era. And there's mutual appreciation between the two: Manson inducted Blondie into the Rock and Roll Hall of Fame in 2006.

So it made perfect sense to see them together at South Side Ballroom on Saturday night. Both bands brought energy and provided a memorable night of entertainment to ticket buyers who came ready to dance. But despite the timeless nature and ubiquity of Blondie’s music, Garbage's edgier music was the bigger hit of the night.

"If you want to play with a beach ball, go to the fucking beach."

The crowd seemed frustrated, and the lack of parking on Lamar Street likely didn't help. More than one patron griped loudly to the parking attendants, and several fans risked ejection by skipping the admission lines snaking around the entrances.

Inside, things were a little more upbeat, but the sheer volume of the sold-out crowd made it difficult for people to maneuver. A woman in a vintage Garbage T-shirt bemoaned her poor view, but her friend seemed to care less as she joyfully belted out lyrics with little care for those around her.

This show also provided a prime opportunity to watch people from all stages of life. A couple of baby boomers dressed up like it was '79 at Studio 54 stood next to a pack of gen X-ers sporting Doc Martens and jean jackets. We also spotted a couple of family outings — parents enthusiastically passing along their musical tastes to the next generation of fans. 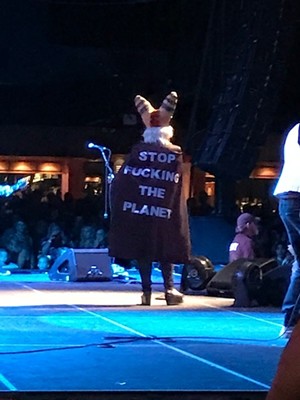 Debbie Harry's attire reflected the audience's angst.
Jeff Strowe
Manson’s stage presence matched some of the crowd’s consternation. During a heartfelt speech about her touring partner, Blondie, Manson became livid about a beach ball being passed toward the stage.

“If you want to play with a beach ball, go to the fucking beach," she said, to meek applause. “Things have changed a lot since we first started playing, and not necessarily for the better."

During the more than hourlong set, Manson furiously commanded the room, stalking the stage with swagger, whipping her trademark bright-red hair from side to side and hurling herself into contorted positions that emphasized the intensity of her lyrics. Manson has always seemed like someone who believes what she's selling.

Although the set mostly consisted of recent material, Garbage didn’t skimp on the hits. “Stupid Girl”, “#1 Crush” and, of course, “Only Happy When It Rains” brought the house down and inspired sing-alongs and iPhone recordings. Garbage also played loudly. South Side Ballroom is a big venue, but the wattage onstage could’ve provided enough thunder for a place like the American Airlines Center.

Her earlier scolding aside, Manson stopped to address the crowd at several times. She offered sincere thanks to Harry and Blondie for a wonderful couple of weeks on tour (Saturday night’s show was the North American finale) and remarked on the timeless quality of their music. She also gave a proper shoutout to Dallas.

“We’ve been coming here for 22 years, and you always bring such great energy," she said. "This is for you motherfuckers!"

At age 72, Harry still displays all of the key elements that have made her a pop and fashion icon for more than 40 years. For starters, there’s her energy. A true display of cardio endurance, she bounced around the stage with abandon from the get-go, putting more aplomb into the opening number — the delightfully classic “One Way or Another” — than many performers would put into an entire set.

Harry hasn't lost any of her trademark spunk. She performed a good portion of the show with a horned crown atop her head and sported a cape featuring a no-so-subtle dig at our country’s recent environmental policies. She also remains a strong vocalist, hitting the short, clipped cadences required of the band’s punkier numbers. 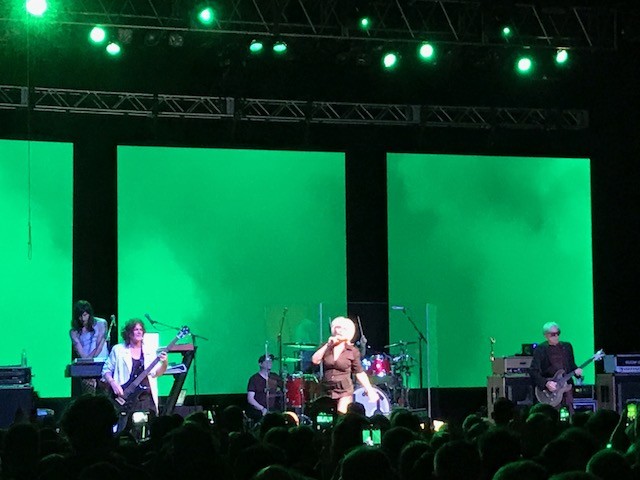 Harry closes out the evening with Blondie.
Jeff Strowe
She even reached back and demonstrated soaring, torch vocals that have never been fully utilized in the Blondie canon. “Gravity," from the recently released Pollinator album, and an out-of-left-field, rearranged version of Celine Dion’s “My Heart Will Go On” proved her true vocal range.

The band sounded great. It wasn't as loud as Garbage, but the veteran lineup of Harry, drummer Clem Burke, and guitarist Chris Stein can make gorgeous noise while sleeping. Augmented by a couple of new — and younger — additions in guitarist Tommy Kessler, bassist Leigh Foxx and keyboardist Matt Katz-Bohen, Blondie had a larger stage footprint than usual.

However, there was still plenty of room for Harry as she roamed the stage from side to side and leaned out on the edges to bask in the adulation of the crowd. She is still the band's centerpiece.