Courtesy Bobby Goldstein
Bobby Goldstein says he was laughed out of the room when he tried to sell his reality TV show to Hollywood in the mid-'90s.
Bobby Goldstein has been in Dallas since he attended college at Southern Methodist University. Afterward, he went to Waco to earn a law degree from Baylor. Still not positive what he wanted to do when he grew up, he had a vision for Cheaters, a Dallas-based show about catching, well, cheaters.

“I was in a restaurant one night after a trial, and I was by myself just eating and drinking,” Goldstein says. “A guy walked by that looked like my uncle. But the woman he was with didn't look like my aunt. So I thought, 'Oh well, I should get some hush money for this.'”


"I was in a restaurant one night after a trial. ... A guy walked by that look like my uncle. But the woman he was with didn't look like my aunt. So I thought, 'Oh well, I should get some hush money for this.'" – Cheaters creator Bobby Goldstein

It wasn’t his uncle, but the moment gave him more than hush money. It gave him an idea.

That was in 1995. After a few years, Goldstein finally shot the pilot. He took a suitcase full of VHS tapes to Hollywood to try to sell the concept to TV executives.

He says he was the laughingstock of the business, which at the time did not see reality television as the future.

“It was foreseeable for me,” Goldstein says. “I knew it would happen because the programming requires very little talent if you want to get right down to it. Reality TV — the essence of it is that it's a one-line joke turned into a 30-minute or one-hour show."

When no one bit what he was trying to sell, Goldstein created a production company, producing and shooting Cheaters mainly in Dallas to be near his children.
click to enlarge 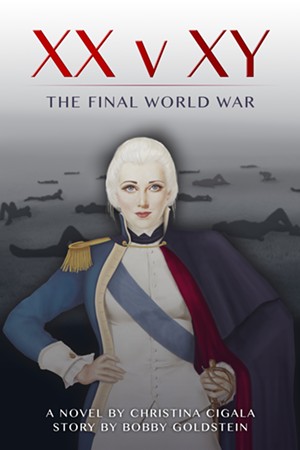 Cheaters ran for 15 seasons with 44 episodes each. He stopped production in 2016, but the show lives on in syndication, making it one of the longest-running reality shows. He says he’s considering picking it back up again.

In the meantime, Goldstein decided to turn his attention to the world of books. He created XXVXY:The Final World War, a novel that takes place in a future America in which the country is separated into two sides. In the East, women are an afterthought, but the West has a different idea. Post Hill Press released the novel Tuesday.

Goldstein hired a writer for the book but says he came up with the idea in 2002 and that he’s the creative mastermind.

“It just hit me: Why does everybody say ‘him’ when they refer to God,” Goldstein says. “And that was really it. I just started thinking and being kind of out there and off the chain. My brain, my mind goes to a shoreline that people haven't swam to before. So it was not only important for me morally, religiously and in life to figure out what it's all about, but it also was sort of my own awakening, that the world is run by men, and why, and what if not?”

The book's title refers to Goldstein's belief that if women ran the world, there would be no more world wars.

“Women just don't operate that way,” he says. “They are wired differently; they think differently; they have more compassion. This not a clever marketing idea. This is something that I really believe. So that's the bottom line, is I think women provide more care and are worried more genuinely about their constituents than the men are, maternity versus paternity.”

Goldstein, who was born in 1957, was raised by a strong woman. He says he knew from a young age that his mother was just as much in charge as his father. He hopes his book will begin a conversation about feminism.

Goldstein says he hopes "a lot of the glass-ceiling stuff really gets shattered, and that your gender shouldn't dictate your opportunities in life, in what bacon you can bring home."