DFW Ghostbusters Car Is Being Sold on eBay

The DFW Ghostbusters are a local, nonprofit Ghostbusters franchise that celebrates the supernatural comedy movies by building costumes and props and making appearances at local conventions and charity events. There's no shortage of Ghostbusters merch on the market — from DVDs to video games, cosplay props, comic books and beverages — but wouldn't it be better to give your loved one something original that benefits a good cause?


"It's gotten a lot of attention, both good and bad. People would follow me into the store, so if you're in a hurry, it's best to leave early because somebody will want to stop and talk to you about it." – DFW Ghostbusters leader Derrick Dorman

Derrick Dorman, the franchise's leader, built the car in 2014 to celebrate the original film's 30th anniversary. He turned a 2007 Dodge Magnum into the ultimate ghostbusting machine for his group's charity and cosplay work.

Dorman says he plans to put the car up on eBay soon and give a portion of the auction's proceeds to the Russ Martin Show Listeners Foundation, the nonprofit charity founded by radio host Russ Martin to raise money for the families of Dallas and Fort Worth police officers and firefighters who died in the line of duty.

"I don't drive it a lot unless we're doing events, and I'm sad to see it just sitting there, and I've wanted to build something else," Dorman says. "So I thought somebody else might like to drive it."

The group's ECTO-1D — named to honor the car from the first film called the ECTO-1, which was made out of a 1959 Cadillac Miller-Meteor ambulance limo — has racked up quite a few miles, but it's also been on an interesting journey in the last three years.

The group's decorated Dodge coupe with a 3.5 V6 engine has become a staple of the its public appearances and charity events. Group members have driven it to places such as Atlanta for Dragon-Con. Last summer, they went to Los Angeles for the premiere of director Paul Feig's Ghostbusters reboot starring Kate McKinnon, Melissa McCarthy, Leslie and Kristin Wiig.

The DFW Ghostbusters even got actor Ernie Hudson, who played Winston Zeddmore in the first two Ghostbusters films, and bassist Jerry Only from the punk band the Misfits to autograph the dashboard on the passenger side. 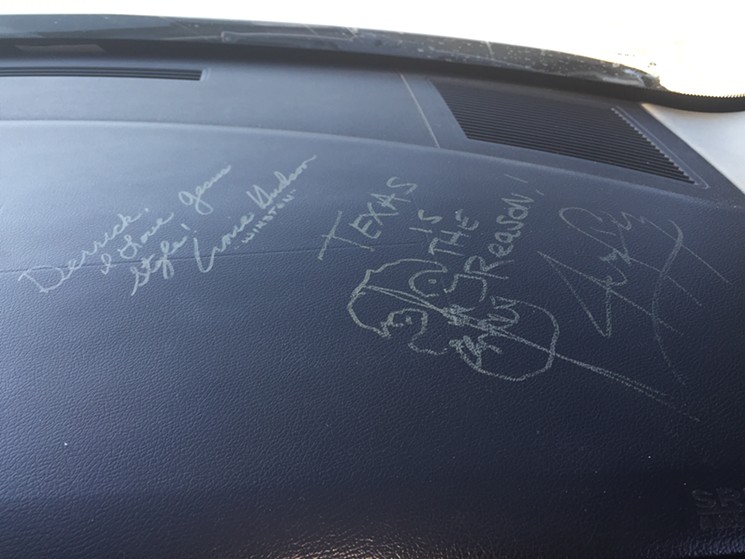 The dashboard of the car has autographs from Ghostbusters star Ernie Hudson and the Misfits' Jerry Only.
Photo by Danny Gallagher
The car has given the group some unique opportunities to support the community. The group's official logo, featuring the Ghostbusters insignia on a lone star, has a tear under the ghost's right eye, a symbol of mourning  the five police officers in Dallas killed in the line of duty by a sniper's bullets in 2016. Dorman says the group was still in LA at the Ghostbusters premiere when they first heard the news and decided to add the tear to the decal before they returned home.

The car doesn't look exactly like the one from either movie, but it has just as many memorable gadgets and moving parts. It could be built only by someone with a working knowledge of a portable positron collider. Pretty much every part the roof, from the satellite to the -sniffer, moves with the flick of a switch. The car also has two sets of blue and white flashing alert lights, a "droning cat" siren and scrolling LED billboards in the rear windows.

The DFW Ghostbusters group added a tear to the logo on the car's hood after the 2016 sniper attacks that took the lives of five police officers in Dallas.
Photo by Danny Gallagher
"It's gotten a lot of attention, both good and bad," Dorman says. "People would follow me into the store, so if you're in a hurry, it's best to leave early because somebody will want to stop and talk to you about it."

The car will appear on eBay in a few weeks. Dorman says he hasn't come up with a starting price because it's hard to put a price on something that gets this much attention on the road.

"It's made a lot of people happy on the road," Dorman says. "When you want to see them light up, all you have to do is flip the switch."