Clever but Empty, Bad Times Throws Back to the Tarantinoid '90s 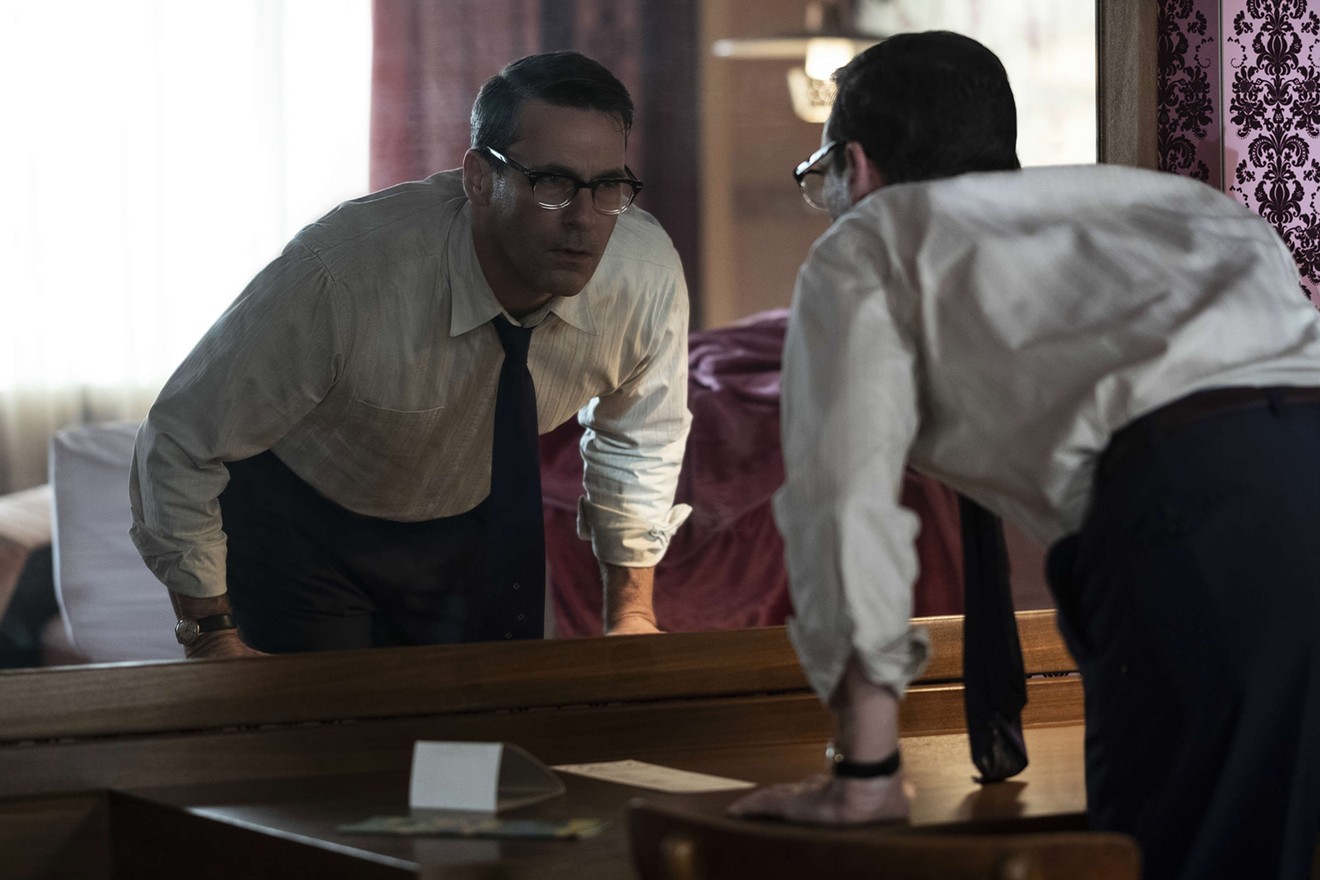 Jon Hamm, playing a vacuum cleaner salesman who rattles on in a Foghorn Leghorn accent, is among the cast of quirky characters in Drew Goddard’s puzzle-box ensemble thriller/curio Bad Times at the El Royale. Kimberley French
There’s no denying this welcome truth about Drew Goddard’s puzzle-box ensemble thriller/curio Bad Times at the El Royale: It’s the rare contemporary studio release where it’s possible to enter the theater and not already have a pretty good idea of what they’re in for. Neither remake, awards bait, nor hero’s origin story, writer-director Goddard’s follow-up to Cabin in the Woods arrives untethered to generic certainty. Its chief pleasures come not from anticipating how its pieces will come together but from discovering what those pieces even are — and just what kind of movie this actually is. Little surprise, then, that as in many puzzle-box entertainments, it’s more satisfying in its teasing buildup than its eventual payoffs. Bad Times is a much better time in its mysterious middle, which tingles with darkly comic possibility, than in its final 40 minutes, when Goddard’s cards are on the table. Turns out, he’s trying to make the twistiest talky killer flick you ever came across on Cinemax in 1997.

I’ll not reveal more than that or what’s laid out in the trailers. As the title hints, with that whiff of “royale with cheese,” this is a Tarantinoid spree, complete with a chapter structure, surprise deaths, timeline convolutions, a vintage mixtape soundtrack and characters who are more gregarious than is probably advisable, considering all the secrets they’re holding. Like Quentin Tarantino’s own upcoming Charles Manson movie, this is a period piece set as the Age of Aquarius withers into the ’70s; more pressingly, it’s set in one of those meta-noir ’90s movie universes where everyone eventually winds up tied to a chair.

Bad Times opens with a priest (Jeff Bridges), an R&B singer (Cynthia Erivo) and a vacuum cleaner salesman (Jon Hamm) walking into a hotel. The El Royale is a sleekly ’60s lodge with Automat food service, a Wurlitzer loaded with the era’s pop hits and a room where a bag of apparently great value has been hidden beneath the floorboards. (The place is also split down the middle between California and Nevada, a quirk that never develops thematic resonance.)

These new arrivals have the hotel to themselves, jawing at each other for quite a while before at last gaining the attention of the clerk, Miles. Hamm’s salesman rattles on in a Foghorn Leghorn accent, calling his luggage his accoutrements; Bridges’ priest clearly isn’t really a priest; Erivo’s singer, to her great credit, has no time for either of them and hastens this lengthy sequence and its go-nowhere talk toward a conclusion. Bad Times doesn’t just look back to the ’70s and ’90s. It recalls, in its lingering dialogue scenes, the days when movies still had something to do with the theater, with watching actors on a set watch each other, their performances dictating the rhythms of the film. Sometimes that’s a boon; sometimes you might be tempted to nip out to the bathroom.

Turns out, most of these people aren’t who they seem. Neither is Dakota Johnson’s character, a swearing woman with a sports car who barges in and jolts the movie. And neither is the hotel — that’s where things get good. After the lengthy introductions, Goddard starts picking his people apart, letting us observe their odd behavior and try to make sense of it. Who is here for the bag in the floor? Why does a vacuum cleaner salesman pick apart his room’s rotary phone while calling his wife and kids? What’s haunting the singer, and why is she eager for a room away from everyone else? And why does each room have so expansive a mirror, besides the fancy of the director, who loves catching his cast’s reflections? The answer to that last one is little surprise, especially if you’ve seen Cabin in the Woods, and the scenes here of Hamm’s character discovering the answer find Goddard at his most sly and enticing. The camera tracks beside him as, awed and horrified, the salesman gets glimpses of everyone else’s secrets.

The best scenes, though, belong to Erivo. Her singer practices alone in her room, to the accompaniment of a metronome, an a cappella crash course in the great soul songs of the age. A beauty of a flashback set at a recording session reveals the hard life of a backup singer; later, as the story threads bind everyone together, she’ll quite literally sing for her life. Defiant but vulnerable, striving for an elusive success, Erivo’s character and performance bring a vital humanity to all the twists and killings. Unlike most of those ‘90s hitman comedies this resembles, Bad Times centers on a character worth caring for.

Those twists twist, then twist again, until there’s no twisting left. Too bad there’s still a significant stretch of movie to go, or that real tragedies of the late ’60s and early ’70s get layered into the meaningless story-like samples. While clever in its structure and sometimes inspired in its surprises, Bad Times ultimately offers something too familiar from too many movies: too much time with a bunch of bastards threatening to kill each other. In its final moments, stabbing toward significance, it resorts to a theme that filmmakers trot out a little desperately when worried that their movie isn’t saying anything. Turns out, it’s all about redemption, a couple of blood-spattered people you could never believe exist exhibiting last-minute grace out of concern for the soul. What fun is a puzzle box with contents that are so common?
KEEP THE DALLAS OBSERVER FREE... Since we started the Dallas Observer, it has been defined as the free, independent voice of Dallas, and we'd like to keep it that way. With local media under siege, it's more important than ever for us to rally support behind funding our local journalism. You can help by participating in our "I Support" program, allowing us to keep offering readers access to our incisive coverage of local news, food and culture with no paywalls.
Make a one-time donation today for as little as $1.