Only the Brave Is One Big, Manly, Beautiful Ugly-Cry 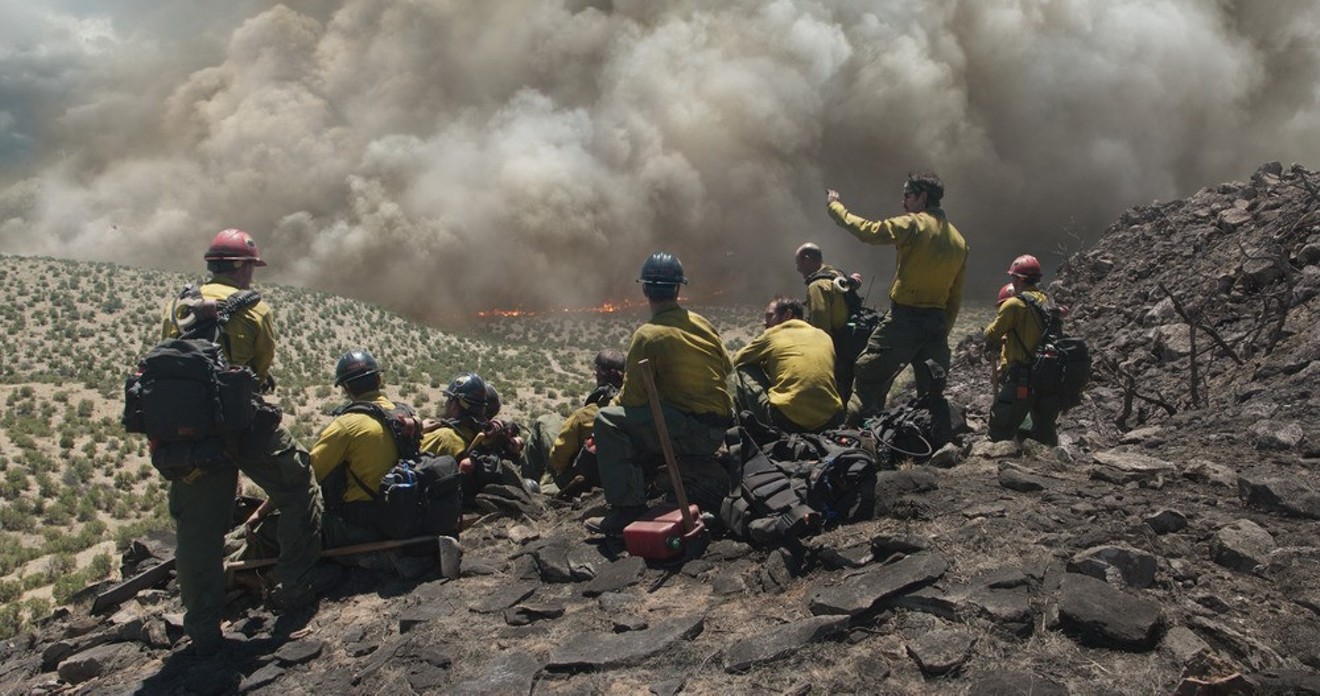 Director Joseph Kosinski's Only the Brave follows a group of firefighters who work the front lines of raging wildfires, using axes and chainsaws to cut down trees and chaparral. Courtesy of Sony Pictures
In the opening shot of Only the Brave, a flaming bear — not just a bear that happens to be burning but one that looks as if it had been created entirely from fire — lunges at the camera in the middle of a blazing forest. The image returns a couple of more times over the course of the picture, a memory that fire crew superintendent Eric Marsh (Josh Brolin) describes as “the most beautiful and terrible thing I’ve ever seen.” Clearly, director Joseph Kosinski has taken that idea to heart. Only the Brave is a visually splendid, spellbinding and surreal movie that also happens to be an emotionally shattering, over-the-top ugly-cry for the ages.

It’s also quite timely, given the wildfires currently consuming much of Northern California. (If such incidents appear to be increasing in recent years, that’s because they are.) Only the Brave follows a real-life group of men from an earlier incident: the Granite Mountain Hotshots, a group of young wildfire specialists from the fire department in Prescott, Ariz., whose ordeal in the Yarnell Hill Fire of 2013 was harrowingly depicted in a GQ magazine article, on which the film is partly based.

“Hotshots” refers not so much to their attitude as to their actual job: It’s a term for those fighters who work the front lines of raging wildfires, using axes and chainsaws to cut down trees and chaparral, which they then torch to create “backfires,” in an effort to burn off a large enough stretch of land so that the real wildfire cannot get past that point. “I want you all to breathe in this beautiful vista,” Marsh tells his men early on, when they’re still training, as they look at a striking mountain view thick with lush, green trees. “Once you’ve been baptized, you’ll never be able to see it that way again. Once you’ve got a small hard taste of the bitch at work, there’s only one thing you’ll be able to see — that’s fuel.”

Much of the dialogue in Ken Nolan and Eric Warren Singer’s script works at that level of earnest, tough-guy poetry, like a fortune cookie you might find in a vat of Skoal dipping tobacco. (“You’ve gotta ask yourself what can I live with and what can I die without.” “I know you guys are looking for sympathy, but the only place you’re gonna find it is in the dictionary, somewhere between ‘shit’ and ‘syphilis.’ ”) The characters aren’t just familiar, they’re elemental: Marsh is the hardheaded but fair veteran fire chief who’ll do anything for his men, but whose work keeps him away from his devoted horse rancher wife (Jennifer Connelly); Miles Teller is Brendan McDonough, aka Donut, a pothead and screwup who, looking for a last-ditch gig after learning he’s got a baby on the way, finds meaning as a member of the Hotshots crew. (That makes him sound like a cliche, but Donut’s a real guy, profiled extensively in the GQ article.) Taylor Kitsch plays the mustachioed ladies’ man who initially gives Donut a hard time but grows to become his best friend and housemate.

The log lines for these characters may sound simple, but the cast gives each new life, like they’re playing stripped-down versions of themselves. The revelation here is Teller, who has so often played mouthy, snarky types; here, gaunt and fair-haired, he nails the part of a quiet, exhausted loser who perpetually seems like he’s looking down a dead end. Suddenly, it’s hard to imagine him playing anyone else. Jeff Bridges shows up, too, as a retired Prescott fire chief who helps oversee the Hotshots, and he perfectly balances shit-kicking gruffness and unfathomable vulnerability. He gets a moment near the end that is some of the most powerful acting he’s ever done.

Such performances contrast interestingly with Kosinski’s style, which is anything but naturalistic. The director previously made two big wannabe sci-fi blockbusters that I loved but few others did, the 2010 sequel TRON: Legacy and the 2013 Tom Cruise vehicle Oblivion. In both those cases, his fascination with architecture and movement worked to offset the thin, one-dimensional nature of his stories and characters, who weren’t supposed to be all that real anyway. He’s working with a far more full-blooded, human subject here, but he’s brought some of the same sensibility he used when dealing with sentient video game avatars and futuristic clone-warriors. He films much of the story as ritual, as if these interactions between brave, ordinary guys were part of an elaborate tribal code that’s been passed down over centuries. And there’s also a fantastical and unreal quality to the events we’re watching. When the Hotshots practice deploying their fire shelters — one-man foil-and-silica-thread pods they need to hide out in if the flames ever actually reach them — it really does look like something out of science fiction.

Kosinski never loses sight of the strange magnificence of his subject. Bird’s-eye shots follow lines of firefighters as they make their way through brush and woods. Distant embers gleam in dark patches of night like glimpses into another dimension. Burning trees fall off cliffs into blue, smoke-filled valleys. Such a controlled, elegant approach might seem counterintuitive; after all, aren’t raging fires and raw emotions defined by their very uncontrollability and urgency? But in this case, the gambit works, and it works beautifully. The regal grace of the filmmaking elevates both the fires and the men who combat them to the level of myth.