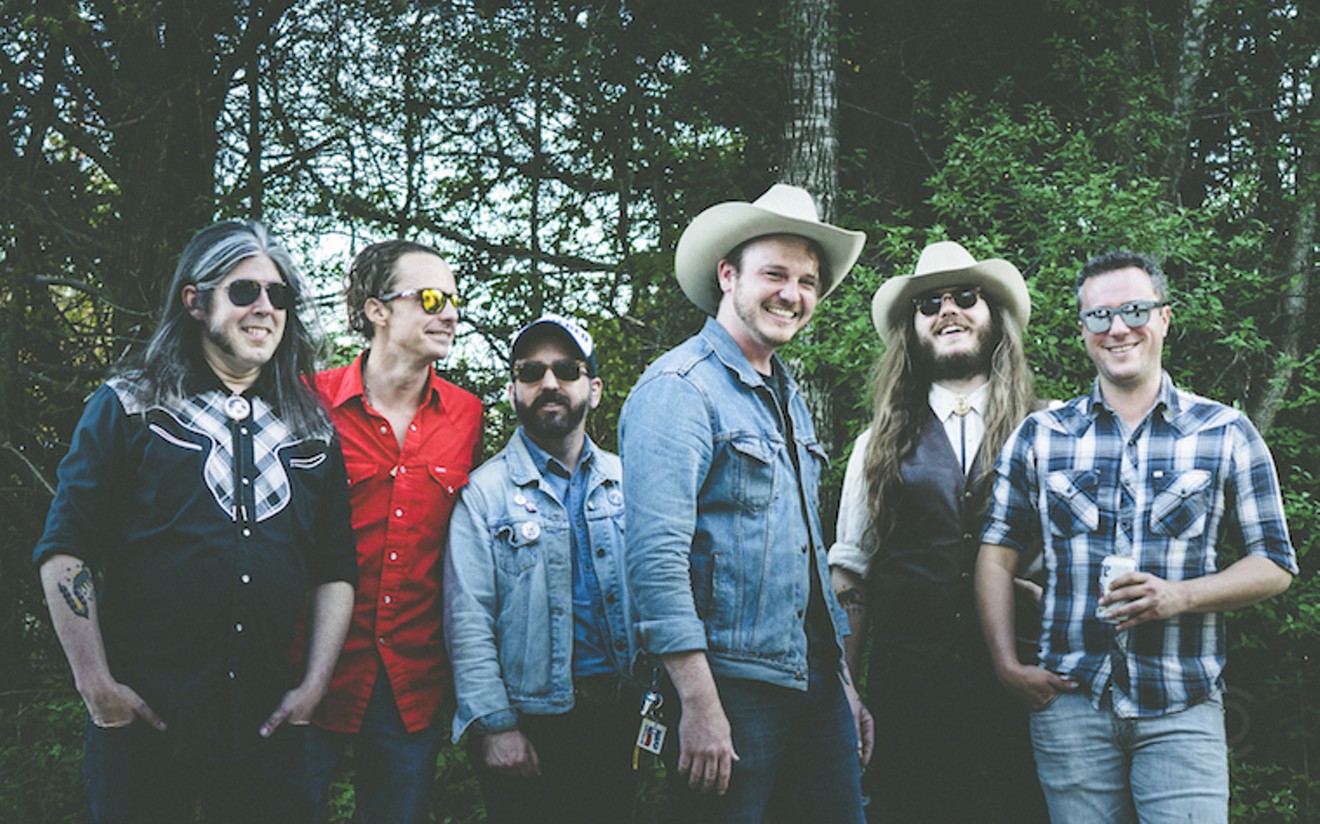 Vandoliers from left: Guyton Sanders, Dustin Fleming, Cory Graves, Josh Fleming, Travis Curry, Mark Moncrieff. Cal Quinn
As a high school senior, Josh Fleming hoped that in 10 years he would miss his class reunion because he'd be on tour. This year, Fleming's wish comes true: When the reunion takes place this spring, he'll be on tour with Vandoliers, the six-piece country band he fronts.

But now Fleming has a new ambition: to ensure Vandoliers aren't just known in Dallas. It's not a fate they seem at risk of suffering, given Rolling Stone recently named them one of the “New Country Artists You Need to Know.”

On May 26, they'll release their sophomore album, The Native, via State Fair Records. They already have plans to tour it heavily throughout the U.S.

Fleming was born in Keller and moved out of the house when he was 17. First he moved to Fort Worth; then Dallas. Musically he veered toward punk and even ska for many years.


"It was something that I grew up on that I tried to deny," frontman Josh Fleming says of country music.

He first made waves in Dallas with his band the Phuss, which produced a mix of glam rock and stoner rock. But that band spontaneously fell apart one night, while they were four songs into a show.

Fleming decided to start a new band that would delve into a genre few knew he was interested in: country. He'd listened to a lot of Johnny Cash and rockabilly growing up, and the idea to make country music had always been in the back of his mind.

“It was something I grew up on that I tried to deny,” Fleming says. “I fell in love with it through Marty Stuart. To me, he was the country Marc Bolan because he’s really cool; glammed out. I was really into T-Rex and I got home from tour and I saw this Marty Stuart show.”

Coming in a little cold helped the band to avoid country music cliché.

“It’s always fun to get into a genre that you know nothing about because then you don’t have a bias,” Fleming says.

Fleming found inspiration in punk rock musicians who went on to make country and Americana albums, such as Chuck Ragan of Hot Water Music and Nick 13 from Tiger Army, deciding that for Vandoliers, he would keep his same, rock 'n' roll singing style and only write about subjects that were true to his life.

And the genre wasn't the only thing about Fleming's approach to change. In establishing Vandoliers, he also made a new effort to pick people he was certain would get the music, work well together and adapt to the touring lifestyle. “The entirety of this band is doing everything opposite of our last bands,” he says.

Formulating the lineup entailed some trial and error. But John Pedigo from the O’s and in-demand drummer Guyton Sanders were two who joined early on and stuck around.

Sanders was playing in two other bands when he first connected with Fleming, but now Vandoliers is his main project. Fleming describes him as vital to the band's sound, not to mention dynamic. “I was really picky about who to pick with Vandoliers,” he says. “I knew I could sit in a van with him and still love him after an 11-hour drive, six times on the same tour.”

The band's 2016 debut, Ameri-Kinda, caught on quickly in DFW. And shortly after its release, Vandoliers' lineup was solidified when Mark Moncrieff stepped in as bassist for Jack Russell, who bowed out due to family commitments.

“This is the kind of band where I don’t want to force anybody to be in a band,” Fleming says. “With the Phuss, it was like, ‘You better not quit!’ the whole time. With this, it’s like, we’re all adults. We love each other. We want to do this.”

Along with Moncrieff on bass, Sanders on drums and Fleming on vocals and guitar, the current lineup includes Joshua's cousin Dustin on guitar and pedal steel, Cory Graves on piano and trumpet, and Travis Curry on fiddle.


"It's Texas music played by Texans," Fleming says. "But we're not saying anything about dirt roads. We're not talking about farms because we don't live on them."

The band that made The Native is much more fleshed out and cohesive than the one that recorded Ameri-Kinda. “We wrote [The Native] as a band,” Graves says. “We rehearsed it a lot as a band. Everyone was in the studio, recording it together.”

The 10-track album touches on mariachi, country, folk and punk rock genres – as if Calexico and Dropkick Murphys got together for a fiesta.

Whether it’s Curry’s fiddle playing on “Pantego,” the gang vocals on “Rain Dance” or the mariachi flair on “Quick to Fire,” there is a lot to smile about. It's definitely not the bro country or red dirt country so popular on the radio.

“It’s Texas music played by Texans,” Fleming says. “But we’re not saying anything about dirt roads. We’re not talking about farms because we don’t live on them. We love and respect the people who do. I’m just singing about my life.”

This means the band doesn’t get pigeonholed into playing only with other country acts. Fleming says it took six months to write the songs on The Native, but only four days to record them at Audio Dallas, where Willie Nelson created his classic, Red Headed Stranger.

A number of friends – including Abel Casillas, and Jaret Reddick of Bowling for Soup – lent their help with backing vocals and various instruments. “We had way more time than we needed, and we only had a week,” Fleming says, adding that Sanders knocked his drum tracks out in the first day. “Because these songs were just so put-together, it really flew by.”

Pedigo, who produced Ameri-Kinda, stayed in the producer’s chair for The Native.

“John has been a driving force in this band," Fleming says. Pedigo is effectively a seventh, unofficial band member. He's played on the records and live a couple of times. He's also the one that hooked up the band with local record label State Fair Records, which has ties to Sony Music.

While Vandoliers were working on The Native, State Fair Records re-released Ameri-Kinda with the intent to spread it beyond DFW, and it worked.


"There's somebody watching over us," pianist and trumpeter Cory Graves says. "Everything has been one e-mail, one text, one call, and it's been an immediate response."

“It was kind of anti-climactic, in a way,” Graves says. “It felt great that we got national press for this old album.”

After a West Coast tour and a few festival dates, Vandoliers found themselves with a manager based in Nashville.  “There’s somebody watching over us,” Graves says. “Everything has been one e-mail, one text, one call, and it’s been [an] immediate response.”

Curry believes their attitudes have something to do with it. “It also helps to not be a jerk,” he says. “We just go into every situation and treat everybody like you would treat anybody – with respect. A lot of people don’t do that.”

Vandoliers have already played all over  – Arkansas, Colorado, New Mexico, California, Arizona, Tennessee and more – and while they admit not every show has been great, their calendar for the year is continuing to fill up and things look promising. They're focusing on playing festivals and opening for national touring bands.

“We have pretty much every state booked,” Curry says. “We’re building our following in each sector of the U.S.,” Fleming adds.

But despite his ambitions, Fleming is open-minded about where Vandoliers takes him and his bandmates. “I just want to be us and allow whatever we are to be what we are," he says. "Vandoliers will play with anybody and we’re big enough to play in any place that has electricity, or without it and we’ll play acoustic.”