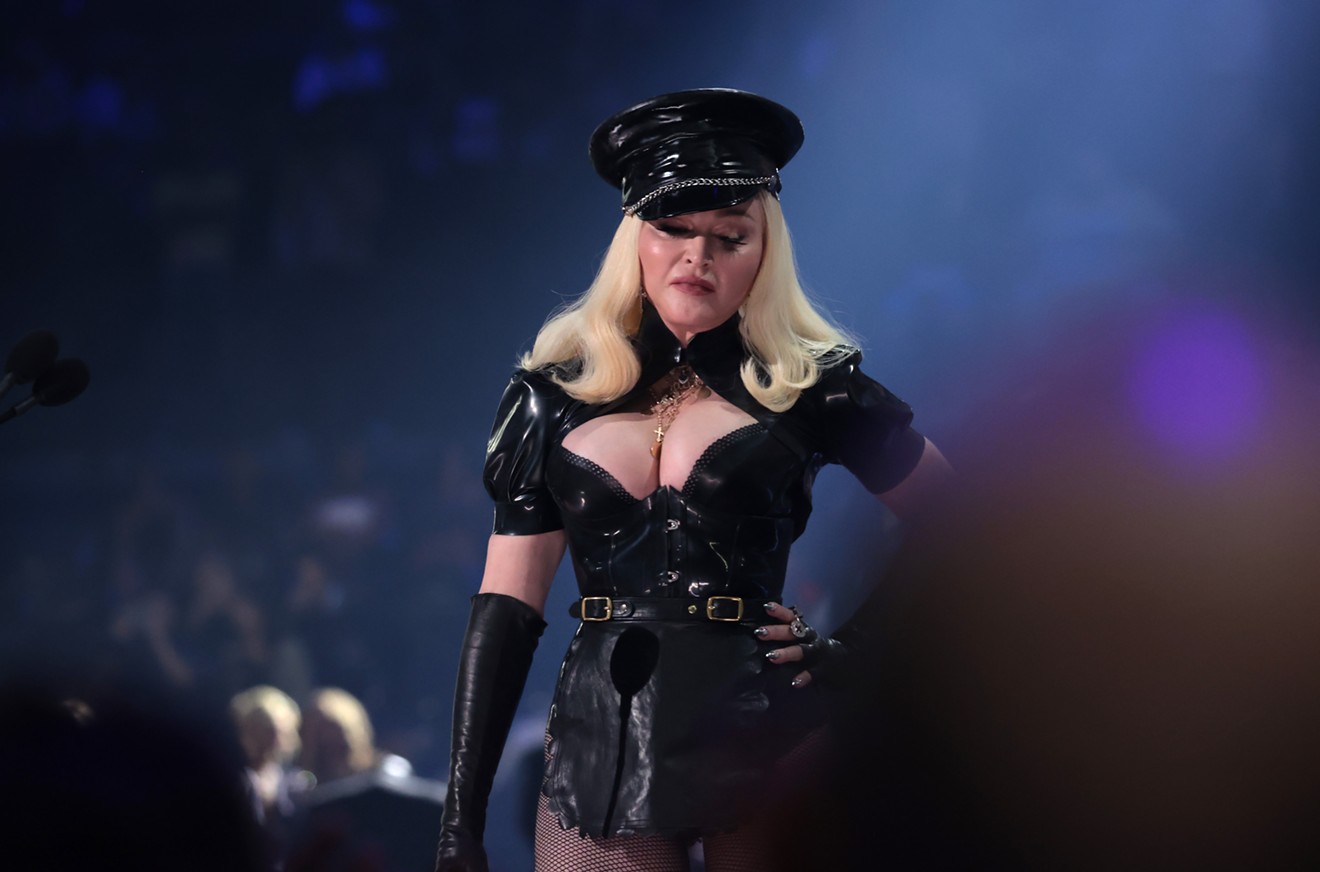 The pop provocateur, who announced Wednesday that her The Celebration Tour will make a stop at Dallas’ American Airlines Center on Sept. 18, has long beguiled the public as a controversial performer. Madonna has given the press enough ink — affairs, marriages, divorces, adoptions — to earn her at least a box of chocolates every Christmas from tabloid editors.

But one topic of conversation that persists lately is the state of the singer's face. Her unnaturally smooth, ageless appearance disobeys the natural sequence of time. The star’s image on social media baffles fans because her face appears so heavily filtered, nip/tuck-ed and threaded that she resembles a Disney villain with a possessive hold on a magical fountain of youth.

Even in the entertainment industry, a realm of nebulous agelessness, she’s less Bravo Housewife and more Braavos’ House of Black and White, specifically its Hall of Faces.

Leave it to Madonna to go against the grain.

The public criticism over Madonna’s changing appearance has been as unkind as if she hadn’t done a damn thing to herself and had let herself age out of the system.

Even those women who opt out of the game and seek to live their lives in unglamorous obscurity, like Shelley Duvall or Bridget Fonda, have been hunted down and put on display for the entertainment of a mocking, brutal public. Those who stay in it are just as ridiculed for letting the passing of time or even disease take its toll, even slightly. This week, acclaimed actress Christina Applegate, who announced last year she has multiple sclerosis, shared screenshots of private messages from trolls criticizing her appearance, even after she responded personally.

Actress Florence Pugh also spoke out recently about the online harassment she received after wearing a sheer dress, and Khloe Kardashian has spoken about online trolls making her so insecure that she avoids public events.

While these privileged women would seem to be in a better position to influence beauty standards, increasingly it seems that plastic surgery is the only choice for female celebrities, whether it’s to stop the clock on their looks or to change their appearance entirely so they're no longer recognizable to a cruel public.

A select few celebrities appear to be aging in a way that’s acceptable to a thirsty public that demands they don't show signs of aging, nor signs that they've had any work done to stop the signs of aging: Anne Hathaway, Sandra Bullock, Salma Hayek and Reese Witherspoon are among the rare elite who either have a restrained surgeon or are genetically blessed and disciplined sunscreen users.

In comparison, Madonna seems to be de-aging herself with greater effects than those used in Scorsese’s The Irishman. But who can blame her?

In 2021, rapper 50 Cent shared sexy photos originally posted by a 63-year-old Madonna with his caption: “This is the funniest shit LOL. That’s Madonna under the bed trying to do like a virgin at 63. She shot out if she don’t get her old ass up. LMFAO.”

She fired back, calling him a fake friend and “jealous.”

Artists, especially female artists, are expected to package their artistic presentation with sex, but only until they reach a certain age, even though it's unclear what age that is. And if we accept — and expect, really — that artists present as overtly sexual in their youth, we should accept it when they're past it.

Madonna may have ignored the cut-off age, her sex-piration date, but that doesn't stop the likes of 50 Cent from trying to shepherd her out to pasture through bullying.

Adele and Rebel Wilson are no longer “plus size” and are criticized whether they are or are not, and even non-rich women are expected to get their boobs, eyes and noses lifted, have their ass cheeks enhanced and their face cheeks reduced. And then to accept the scrutiny for conforming.

It is actually a shame that an artist as influential as Madonna didn’t join the pro-aging club with rare figures such as former model Paulina Porizkova. Is it disappointing that such few female icons are able to normalize aging? Yes, but we can’t expect Madonna to take the hit and stand up mostly alone against the patriarchy. Again.

Madonna has been a trailblazer since she first moved to New York as a young woman. She had $35 and no industry connections. Armed only with ambition and self-confidence, she'd go on to break multiple Guinness world records and, of course, become a global star. She was also one of the first women in popular music to make sex appeal a non-passive component in her art.

As she reminded the audience in her acceptance speech for her 2016 Woman of the Year Award from Billboard, Madonna's path was paved with sexism, and she had to overcome resistance nearly every step of her way.

She was widely criticized for taking on the title role of Evita in the 1996 film, for instance, because cynics believed she couldn't do justice to the Argentine first lady because of her own infamy, not for her lack of acting chops.

Madonna has been a trailblazer since she first moved to New York as a young woman. She had $35 and no industry connections.


The release came five years before the decade would become stained by the Clinton-era “Sexgate” scandal, and yet Madonna is arguably remembered as the greatest symbol of sex of the time.

Few events can contextualize America’s misogyny, which Madonna rejected, quite like Sexgate. When President Bill Clinton had an affair with White House intern Monica Lewinsky, she was the one villainized as a home-wrecking Jezebel, despite the obvious disparity in their age and position. She was a 22-year-old intern, he was a 49-year-old president of the United States. And though we have a long way to go, the narrative surrounding Lewinsky probably wouldn't have happened today under TikTok's watch.

For one thing, we now regard the age of early 20s as extended teenage years and have come to recognize  power dynamics.

Madonna may be extra as fuck (like when she signed the Tidal artist declaration in the least chill way), but maybe that’s because we need extra Madonna in the industry. She may be known for being a little bit mean and a diva among her peers, but she has long made a point of shining a light on the marginalized and of embracing the queer community. She’s the mastermind behind the Britney and X-Tina kiss. She's the LGBTQ queen Lena Dunham believes herself to be.

To point out that Madonna’s singing prowess is medium at best and her songs have always been entirely of the moment is to minimize a complex career in a way that doesn't apply to acts like The Weekend or Bruno Mars. Madonna is no less of a showman than those with literal balls. She's more than an unnaturally youthful face, but a face for women who refuse to ask for permission.

In 2023, decades after she made her name singing about dating men for money — and for blasting through her blasphemous years without backing down, Madonna is still charging up to $1,000 a concert ticket.

50 Cent should buy one so he can sit his old ass down. Madonna is still standing as the Queen of Pop.
KEEP THE DALLAS OBSERVER FREE... Since we started the Dallas Observer, it has been defined as the free, independent voice of Dallas, and we'd like to keep it that way. With local media under siege, it's more important than ever for us to rally support behind funding our local journalism. You can help by participating in our "I Support" program, allowing us to keep offering readers access to our incisive coverage of local news, food and culture with no paywalls.
Make a one-time donation today for as little as $1.