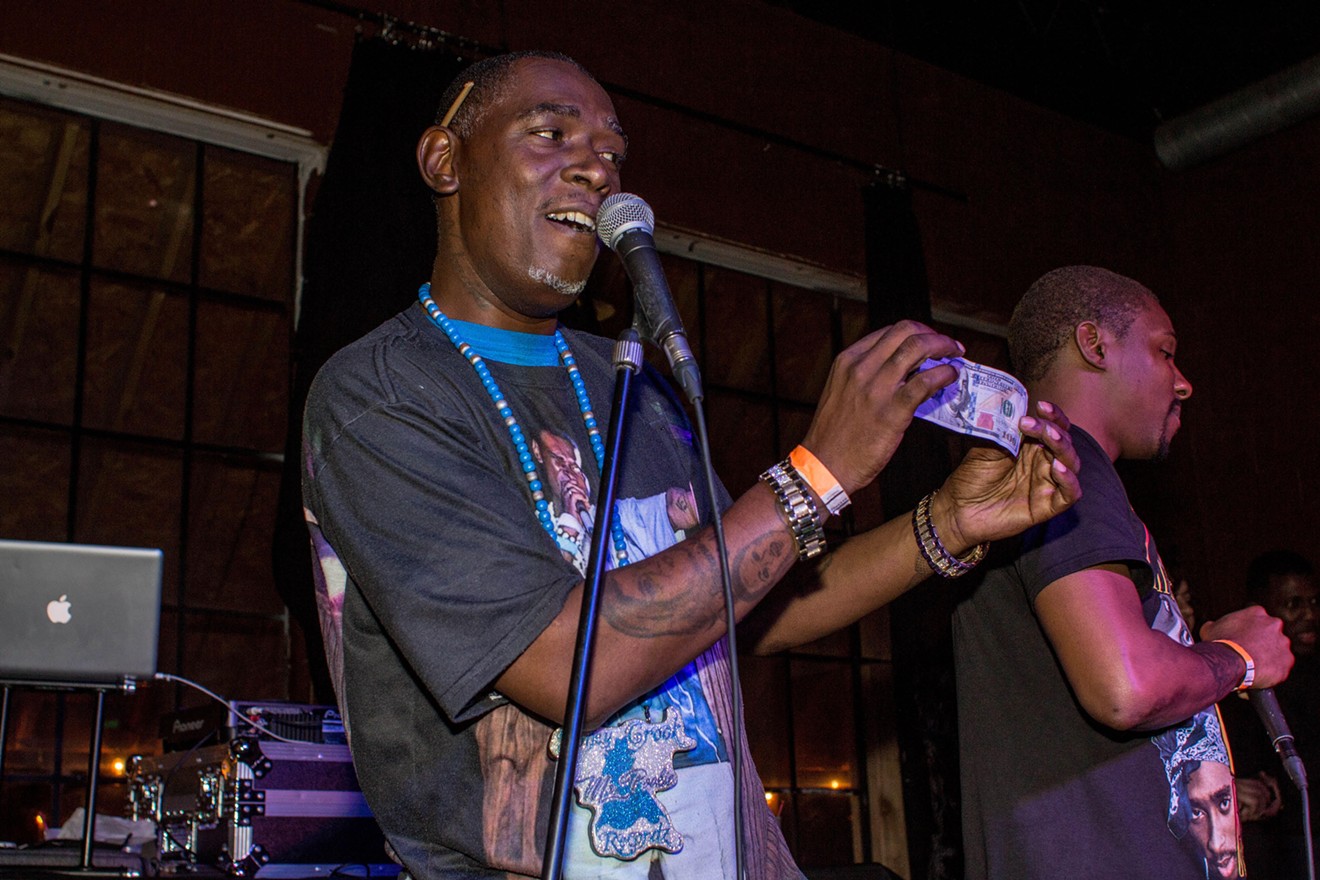 Legendary rapper Mr. Pookie is an open book, with the most moving of stories. Andrew Sherman

“Crook 4 Life” and “Smoke One,” a couple of '90s-era megahits authored by Mr. Pookie, lent hip-hop cred to Dallas — North Dallas, at that — when conventional wisdom deemed South Dallas the origin of all our rap. Before speaking to us on the phone, Mr. Pookie apologizes and asks if he might call back in 30 minutes. “I have my grandbaby here.”

Could this polite voice be the same one that spit lyrics such as “See tha dope blow and Ima weed fiend/ finna bleed steam ...?" The mind behind The Rippla, the biggest-selling independent rap album out of Dallas to date, according to Nielsen’s SoundScan? Indeed it is. He’s just in Bryan Jones "family-man mode" at the moment. A half-hour later Jones is back on the line, counting the humans he’s begat since his swift rise to fame: five. Then one grandchild and another due soon.

Pookie lives with his wife of 10 years in Rockwall, but don’t hold his domesticity against him. The 41-year-old patriarch has endured beyond his share of trauma — not only while existing along the fringe of the rap lifestyle, oft plagued by drugs and gun violence, but also as an adult when he lost his beloved “mama” to domestic violence. Two years later his brother died in a drug-related shooting. Before that, there were the veritable wars he witnessed while living in northeast Dallas (“the Nawf") and the time he personally took a bullet. And he might count on a couple of hands all his buddies doing time in prison, including Mr. Lucci, the talented artist who at 16 appeared on that first Pookie record.

Many of his fans call Pookie a soldier. He never was known to engage in much actual violence and didn’t sell dope. He was just a dude who somehow held it together all the times he was in the shit.

Under the nickname his grandma gave him at age 4, “Pookie,” he continues to write music, perform and mentor a new generation of rappers. He’s going to make another album with Lucci, he says, once he's out of federal prison in August.

Holding his mostly solo CD The Rippla in his hands for the first time, Pookie recalls, was shocking and the proudest moment in his life. He had no idea it would hit as hard as it did. For that, he thanks the Dallas fans he says responded to the record because it was so much about the city. Pookie answered some questions for us about his fascinating ride in the hip-hop world, about his book and about his family tragedies.

Is it kind of surreal — and adorable — when Mr. Pookie, unapologetic Dirty South rapper, mentions his grandbaby, or is that just me?

(Laughs) A lot of things are different from when I was 21, but I am still excited about and involved with Dallas’ rap scene.

Can I ask about a viral video going around of a little boy playing “Crook for Life” on piano, and you show up and surprise him. What’s happening here?

This father two years ago posted his son learning to play the song on the keyboard. It was really cool, and my manager, Callie Dee, saw it. Mystikal (the rapper) even shared it (on social media), and Callie connected with the family, the Mussers, who live in Fort Worth, and got us together.

But it is relevant because not only do you have a bunch of kids — family — you adore now, you enjoy mentoring and sharing with aspiring musicians, right?

Yeah, now I’m hollering at these younger underground artists and judging these open mic competitions. They didn’t have this in my time, and it’s a big opportunity for them.

I hear you’re also publishing a book. A memoir?

No, now yes, I am working on a memoir, but what I have already finished is a three-part series of books about my friend Kabir Tatu, who I ran with when we were young. We saw every kind of thing on the streets. I grew up in every part of Dallas, knew every hood. We was Section 8 and my mama was always trying to move us up to better and better neighborhoods and school districts. Forest Audelia was where I wound up, where I got into rap. A lot of people didn’t realize how rough those streets were. So these are nonfiction urban tales, about the hood, the streets, being stuck in this lifestyle that sucks in and devours people in our profession. Kabir couldn’t break free. He’s serving a life sentence in Iowa prison. The series is called In Between Hustles. I’m hoping to self-publish these, because we don’t want to deal with the middle man and the publishing business. But that means we need to raise some money in order to do it professionally, properly, so there’s a GoFundMe page out there now.

You went to Berkner High School up in the north/Richardson district. Wikipedia says, with a disclaimer that there is “no citation,” that you got kicked out of high school in grade 11. Is it true?

Yes. It was because of one class, biology. I just couldn’t get it, didn’t like it, so I stopped going for an entire semester. (Laughs) I do not know what I was thinking!

So, how did you manage to stay out of all the drug stuff?

Well, I was on the fringes at times, but I had an older brother who was deeply involved. He went to jail. But he would never allow me to get into it. He’s the main reason. And he didn’t get out alive. He was shot and killed, and it was drug related, a few years ago.

Is this why you went quiet for some time — became less active for a while?

Well that, and my mama died in 2011— it was the greatest tragedy of my life. My father killed her.

Was this a longtime abusive situation?

Not really. They would break up and get back together a lot. But he hit her in the head with a hammer — that’s how she died. He’s in prison. But yes I was depressed and did not feel like making music. I was uninspired. Then I was having kids of my own — I never steered them toward the rapper life, but they can rap, my boys, but they are more into sports. I gradually returned to writing and writing music and lyrics.

Did you initially consider yourself a writer, or poet, before the whole rap thing happened?

Yes. Decided in fourth grade that I loved poetry. I had the best teacher you could imagine, Marsha Prophet. We had a career day where we went to the library and picked out books about different things we might want to do in life. And then there was this contest where we wrote a poem about our books, what we got out of them. I wanted to be a baseball player but for some reason picked out a book on marine biology. So in my poem, I’m a shark in the sea. After I read it, the class gave me a standing ovation and I won first place. I liked that — liked how poetry came to me and I liked that attention. I wrote a lot of poetry and got better. My uncles were into the music, so they one day told me to freestyle and I just spit something I’d already written. They were impressed. I didn’t know anything about music, but I started hanging around with more serious rap guys. I remember recording myself — they used to have these booths at the mall and stuff where you could do that. But no one who knew me ever expected a rap album to come from me. They couldn’t believe it any more than I could.