Nychelle Went From Tattooing Rappers to Opening for Them 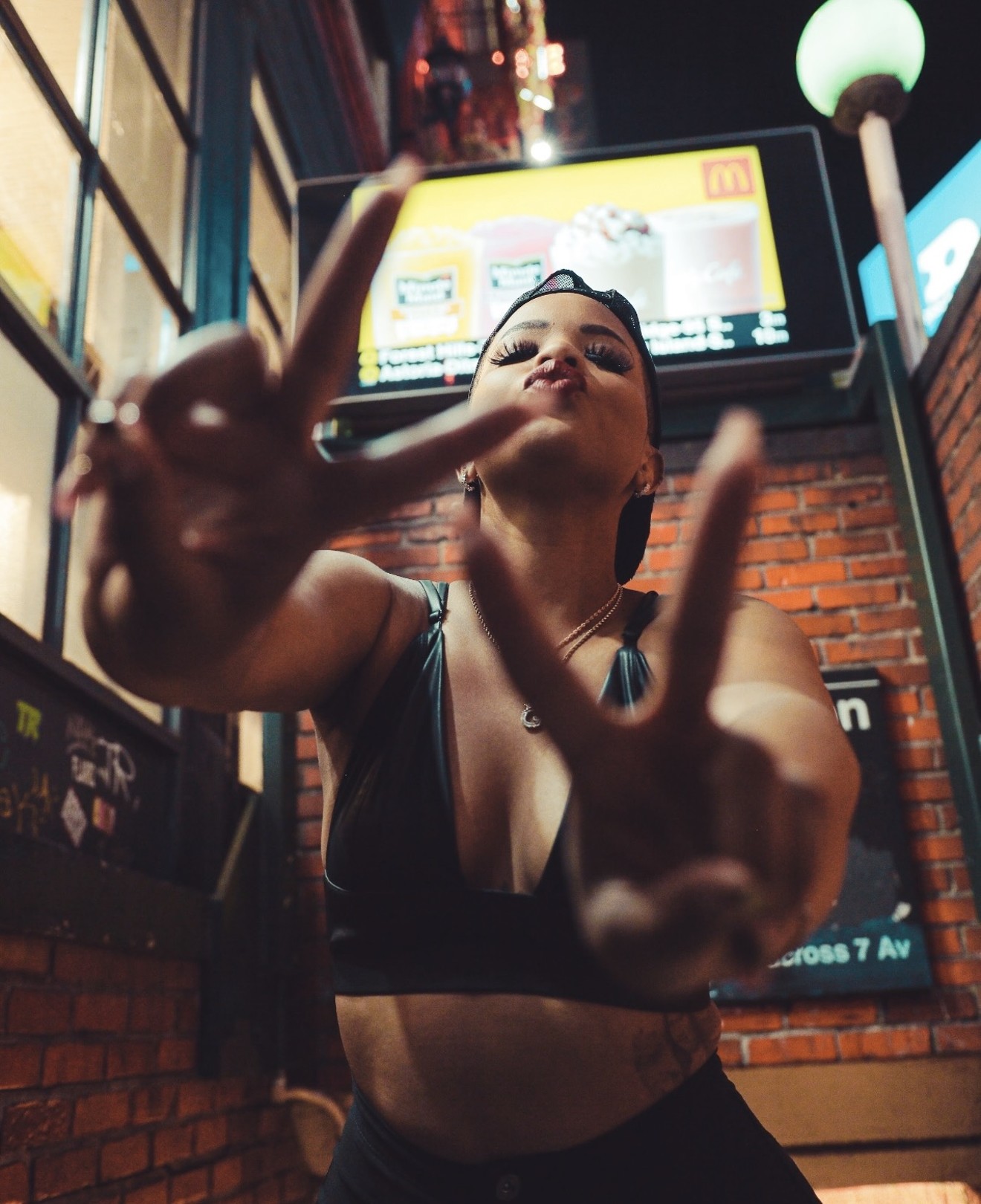 Nychelle changed her tattoo pen for a regular one, and started writing lyrics. Now she's opening for Tay Money. Nazeef
Many artists like to call themselves a "jack of all trades," but in the case of Nychelle, the cliché fits. As a mother, tattoo artist, business owner, rapper and singer, the North Texas artist has built quite an impressive résumé. In between tattoo appointments at her Plano parlor, Nychelle Elise Fine Body Art, Nychelle focuses on music.

She speaks of the many hats she wears on her debut single, “What They Want.” Over a thumping, kickdrum-driven beat, Nychelle asks, “What they want from a bitch?” and reminds men that she’s “got racks in the building like JCPenney / Don’t need yours, ‘cuz I’m making plenty.”

“That was actually the first single I ever dropped,” she says. “It’s basically me saying, ‘I do everything.’ I paint, I do tattoos, I’m a mom, I can do a lot, so what else do you want from me? Give me my flowers.”

Nychelle was born and raised in Baltimore by two parents who hailed from the Caribbean. She grew up on the sounds of Erykah Badu, Outkast, Bob Marley and Jay-Z. Nychelle always had a love of art and painting, and this passion flourished more when she first saw a person with tattoos when she was round 8 years old. She was excited by the fact that people could wear art on their bodies.

“When I was young, I used to draw my own tattoos [in a notebook],” Nychelle says. “I always said ‘I want to get tattoos, I want to tattoo,’ but I didn't know how to go about it, but I was always intrigued.”

She made her way to Dallas during her college years, when she began studying fine art and drawing at Texas Woman’s University. Since then, she’s painted on stage at several rap showcases in Dallas for the likes of Rapsody and Schoolboy Q.

Inspired by the craft of the rappers for whom she was painting, Nychelle had ideas for her own music that lingered in the back of her mind. At the time, she was primarily known for her tattoos and drawings, so she felt more comfortable sticking to her role as “the artsy girl.”

It wasn’t until the COVID-19 pandemic struck that she finally let her musical creativity burst out.

“I was losing my mind in quarantine,” Nychelle says. “But that was my chance to tap into that creative space of making music. I would jot stuff down every single day, and I wrote to different beats on YouTube. I listened to a lot of big L and Jay-Z, and I just started writing. I had all the time in the world, and I just put myself out there. I remember I posted a freestyle on Instagram, and everybody was shook.”

Since putting out her debut single, “What They Want,” the song’s accompanying music video has pulled in over 14,000 views on YouTube.

In another song of hers called “Bluetooth,” released this February, Nychelle examines a relationship that’s been kept on the down-low, in which the two parties remain “connected from a distance, like a Bluetooth.” It's a more alternative, R&B-inspired track that shows off her soft-tinged vocals.

Over the past two years, Nychelle has become as known for her music as for her tattoos and art. Earlier this year, she supported Tay Money on tour during a performance in Atlanta and even opened for her in Dallas this past May, during Money’s annual Tay Day birthday celebration.

“Her fans were going crazy in Atlanta,” Nychelle says, “and that’s not even where she’s from. I knew in Dallas, it would be 10 times crazier, and that’s exactly what we got. Her fans were so receptive of my music. They were screaming the words, dancing and just going crazy. I really enjoyed myself. That was one of my best shows I've ever had, and I gained a lot of new fans. Tay Money has some of the best fans I've ever seen.”

“That was actually the first single I ever dropped,” she says. “It’s basically me saying, ‘I do everything.’ I paint, I do tattoos, I’m a mom, I can do a lot, so what else do you want from me? Give me my flowers.” –Nychelle


Nychelle will drop her debut EP, Rare Form, on July 28. Ahead of the EP, she has released a raunchy new single, “Nasty Chick.” Rife with her clever wordplay and sexually charged lyrics, “Nasty Chick” is a sex anthem in which Nychelle lets men know that she’s the one in charge — over a trap-inspired, piano-and-drum-driven instrumental.

“I wanted a song that people could dance to,” Nychelle says, “but at the same time, didn’t give off the same old message that you hear on music with this type of flow and this type of beat. I wanted to show that fun music can be just as lyrical as anything else and you don’t have to sacrifice lyrics to make something catchy.”

With her confidence, wit and skills with the pen, Nychelle is poised to be one of the next big promising rap acts out of Texas. While visual art and drawing will always be her first love, she’s looking forward to becoming a hip-hop artist.

Our interview took place at 10 a.m. on a weekday. About an hour before our call, Nychelle said she had five people who had tried to call her to book tattoo appointments for that day. She still enjoys helping tatt up other people, but with her music, she aims to liberate herself.

“When I’m tattooing, I'm creating a piece for a specific person, and I'm creating what they want,” Nychelle says. “I'm making it into the best version for you to wear for forever. When it comes to my music, no one can tell me my music is wrong. Well, you can tell me you don’t like my music, but my music is still honest and true.”
KEEP THE DALLAS OBSERVER FREE... Since we started the Dallas Observer, it has been defined as the free, independent voice of Dallas, and we'd like to keep it that way. With local media under siege, it's more important than ever for us to rally support behind funding our local journalism. You can help by participating in our "I Support" program, allowing us to keep offering readers access to our incisive coverage of local news, food and culture with no paywalls.
Make a one-time donation today for as little as $1.