Deep Purple and Alice Cooper made for a strange pair at Starplex on Saturday night. Both groups rock legends, and they're on the same record label, but that's where the similarities end.

Beaumont-born Edgar Winter warmed up the audience with a five-song, 45-minute set. Sound issues did not derail the hit-friendly collection of songs popularized by Winter and his late brother Johnny. However, the seemingly never-ending solo improvisations during “Tobacco Road” tested listeners' patience.


As the shock value of Cooper's presentation has subsided, the quality of his hooks have kept him relevant.

Alice Cooper’s 14-song, 70-minute performance was absolutely wonderful. Although he has played the original rock-and-roll villain for decades with a similar stage show, his music and persona have aged well.

Cooper played a few tracks from his new album, Paranormal, and his energetic five-piece backing band kept the audience members on their feet. Whether it was “I’m Eighteen,” “Poison” or “Lost in America,” the crowd seemed to love the energy Cooper and his band gave.

The show has been done before — for a few decades. But the dancers, bubbles, confetti, Frankenstein monster and guillotine were entertaining nonetheless. And as the shock value of Cooper’s presentation has subsided, the quality of his hooks have kept him relevant.

“Have a sick summer and horrible nightmares,” Cooper said to the audience after closing with “School’s Out.” 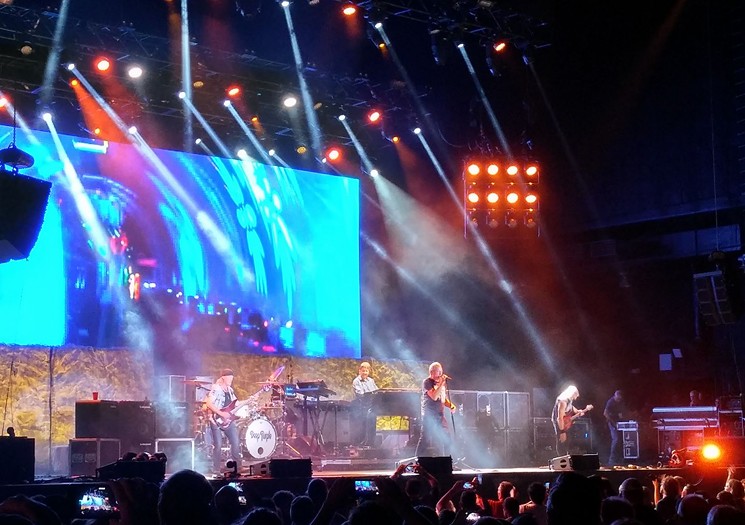 Deep Purple fell flat.
Eric Grubbs
Cooper put on an arena rock show that reached from the front row all the way to the Starplex lawn. Deep Purple put on a decent show, but it was no match for Cooper’s pageantry.

Don Airey was an absolute charmer behind his handful of keyboards, executing fill after fill down the black and white keys. Steve Morse is a guitar god in his own way, running up and down the fretboard and bending his guitar strings over and over.

Roger Glover had an incredible low end with his bass parts. And drummer Ian Paice still has that perfect swing, which gives flavor to the band’s sometimes heavy mix of blues, jazz, classical and psychedelic rock. But vocalist Ian Gillan seemed to struggle to match the power of his bandmates. His high-octane vocals on songs like “Highway Star” and “Space Truckin" were not what they were on the original studio recordings.

The audience, consisting primarily of people 45 and older, had had enough by 11 p.m., when Deep Purple launched into its final tune, “Hush."