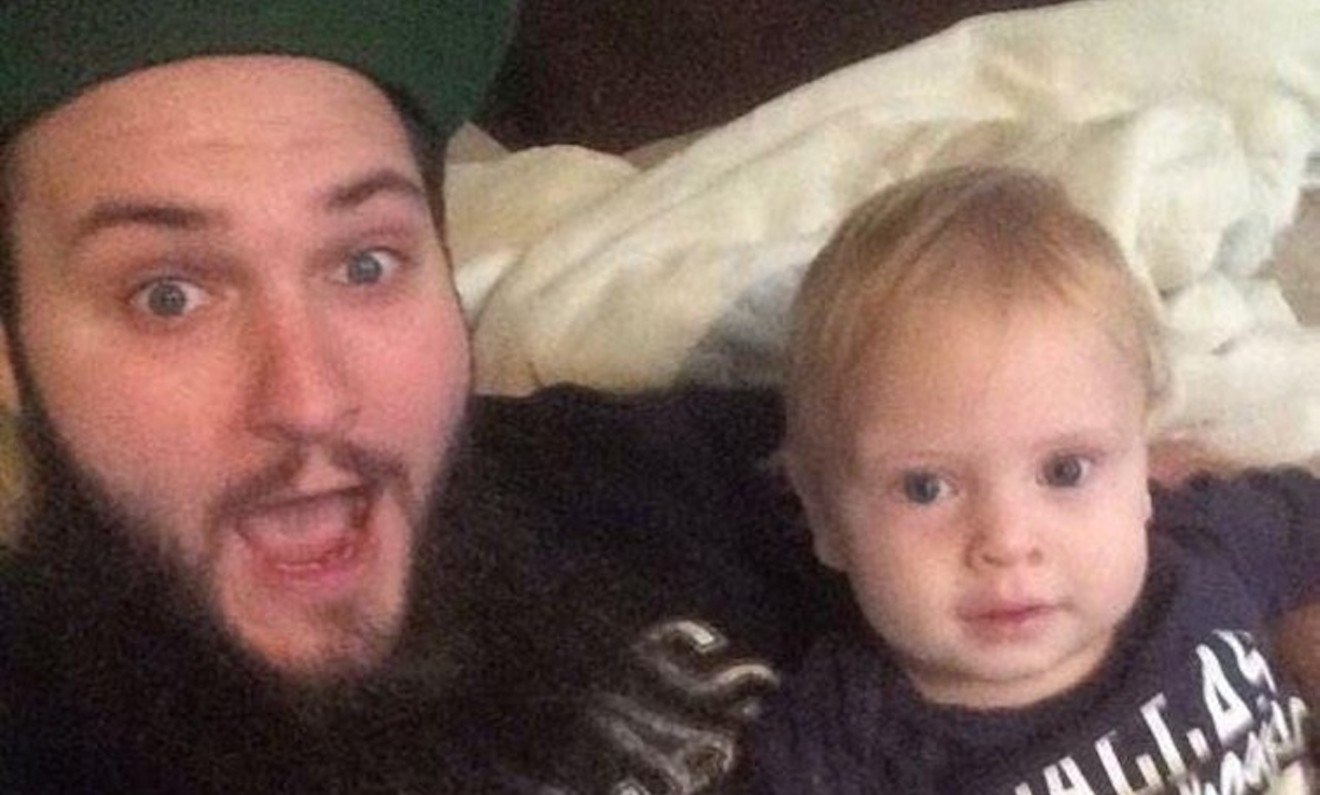 courtesy Jennifer Jones
Despite a diagnosis of an inoperable brain tumor, Rustin Luther was determined to follow his rock star dreams as the bass player for local metal band Urizen. He'd already accomplished his dreams of owning a music venue with Tomcats West in Fort Worth, and he later opened the Dirty 30 in Dallas.

Not long after he announced his diagnosis in April 2016, the 30-year-old father of five even reappeared onstage with Urizen as if he truly were kicking cancer's ass.

“I’m a stubborn asshole, man,” Luther told the Observer in April 2016. “I've got many years. I’ve got the kids that I’ve got to see grow old. I’ve always wanted to see myself with gray hair.”

On Saturday night, Luther died at the hospice care center where he’d been living for several months. He was 31.

“Last night, I lost my brother Rustin,” Urizen band member Thomas Drinnen posted on Facebook early Sunday morning. “He was the yin to my yang. Somewhere along the line our dreams intertwined, and from that moment on, it seems that things always just got bigger and better. Rustin was all the things that I am not and then some. I felt like we really complemented each other well and made a great team, and as his final days had been drawing closer and closer, I just kept hoping that the memories we shared together meant as much to him as they do to me."

"I know you told us to expect this outcome, but nothing could really prepare you for the day it comes."


Luther first noticed signs that something was amiss at the beginning of 2016, when his left eye started to turn cross-eyed. A friend who worked as an eye doctor told him, “Brother, it’s not your eye," and recommended a neurologist. Luther was about to go on tour and decided to wait until he got home to seek one out. He made it to the fourth leg of the tour before he was forced to go to the ER.

A couple of hospital trips later, he found himself at UT Southwestern Medical Center, where tests showed that he had a tumor amassing on his brain stem. Luther learned that the tumor wouldn’t spread but would grow larger and eventually overtake his brain stem. At the time, doctors were unable to determine the cancer stage or how fast it was growing.

“Don’t worry, Dad; I’m not scared. Science will stop it," Luther’s oldest son told him after he found out about the tumor.

When Luther's friends and family found out, they created an account on a fundraising website and hosted benefit concerts to raise money for his mounting medical costs. Another benefit concert was scheduled for late August to help with his hospice costs.

“If you're reading this, it means that you are one of the countless people in the world who call Rustin Luther a friend, a brother, a family member, a community leader, or just a really good dang ol' dude!” Drinnen wrote on the fundraising website. “I've never seen anyone spend more than a minute with Rustin without falling in love with his loud (VERY loud) personality and huge Texas charm. He's just a one-in-a-billion guy who brings smiles anywhere he goes.”

Earlier this year, as his condition began to deteriorate, Luther moved from his family home to a hospice care center. His relationship with girlfriend Jennifer Jones became harder to maintain.

“This past year has tested me beyond all limits,” Jones posted on Facebook in late June. “And I’ve hit my breaking point quite a few times. From being severely depressed and alone, having ‘friends’ disappear because they don’t agree or understand, watching the man I love turn into a different person in front of my eyes while powerless to stop it …

“Yet, I look at my children, and they give me strength to soldier on,” she continued. “No matter how down and depressed I am, I find strength to get out of bed every morning and try to make the best of the day, because no matter how bad today might feel, tomorrow is a new day.”

Shortly before his death, Jones posted that she was with Luther at the hospice center. “Just to update everyone: Rustin is not doing well and is not expected to make it much longer,” she wrote. “He is NOT accepting visitors anymore at this point so please do not go to the hospice center. If you have any questions you can contact me directly and I will answer as soon as I can.”

Friends and family were quick to take to Luther’s Facebook page and pay homage. “I'm at a loss for words,” a friend posted. “I know you told us to expect this outcome, but nothing could really prepare you for the day it comes. It's somewhat comforting to think you're at peace now, I just wish you could have been at peace here with us. I'll never forget your inspirational words, and I promise to keep on living life to the fullest. R.I.P. Rustin Luther, the world has lost another bright shining light …”

Former Warbeast vocalist Bruce Corbitt, who has esophageal cancer, posted a picture of himself with the caption: “I’ll kick cancer’s ass and tell it this is for Rustin Luther!” In the photo, he's pointing to his T-shirt, which reads, “The Devil whispered in my ear, ‘You’re not strong enough to withstand the storm.’ Today, I whispered in the Devil’s ear, ‘I am the storm.’”

Luther's Urizen bandmates also took to Facebook to memorialize their fallen comrade: "There's a bright new star shining down on us from the Texas sky tonight. We love you, Rustin."