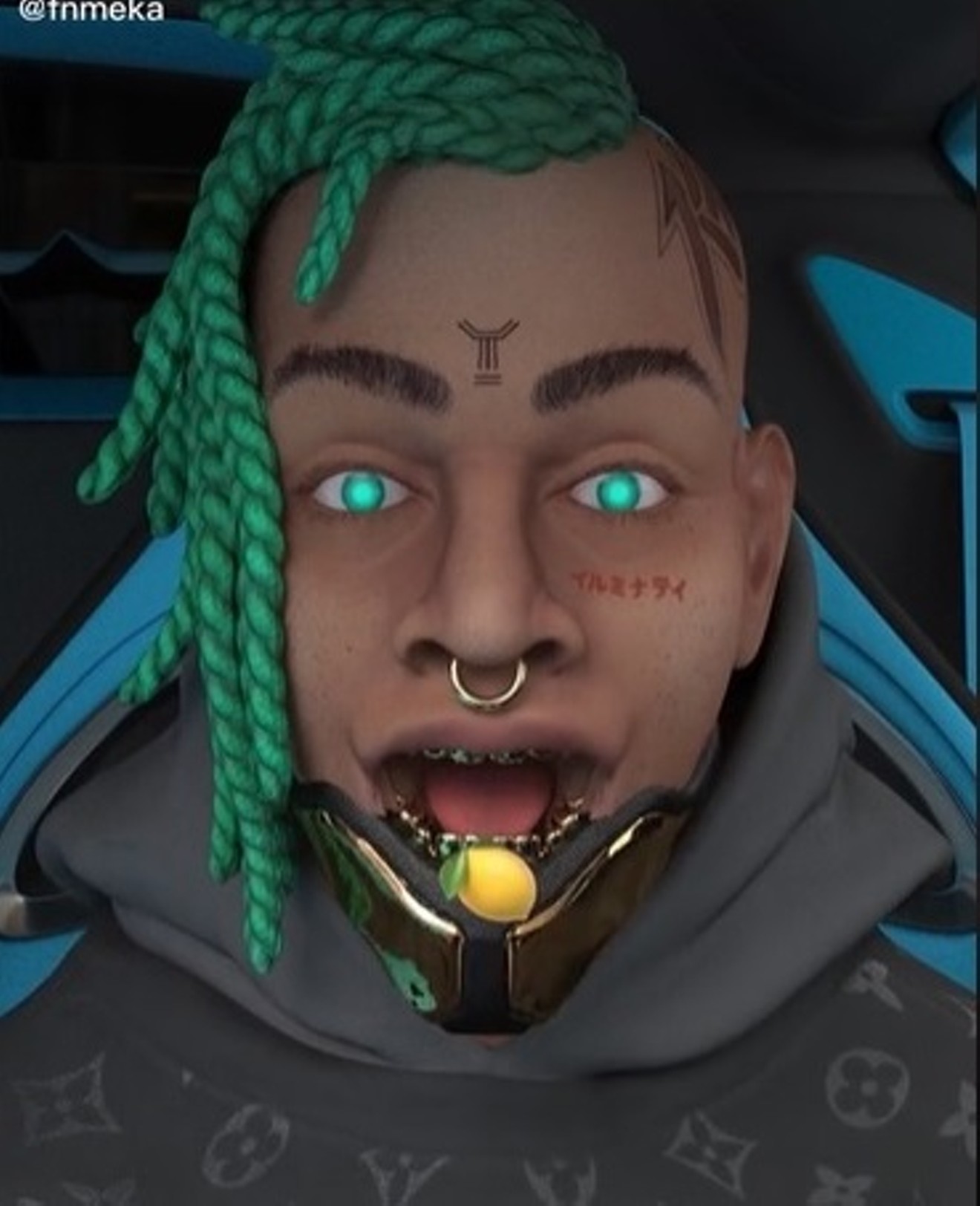 AI rapper FN Meka has 10 million followers and a major record deal. And Damon Albarn complained that Taylor Swift didn't write her own songs. Screenshot from TikTok
Without a doubt we are living in a reality written by novelist Isaac Asimov. First, robots began taking the place of cashiers and telemarketers (making it that much easier to hang up on them, on the bright side), and they are projected to replace millions of manufacturing jobs just in the next three years. One study by economists estimates that AI will replace 20 million jobs by 2030. But first, they’re coming for rappers’ jobs.

Capitol Records, the major label that represents artists such as Paul McCartney and Katy Perry, recently announced it had signed a new artist named FN Meka, who has a TikTok following in the millions. The only thing is, he’s not real.

FN Meka is a virtual creation. His voice belongs to a real person, whose name is unknown, but his lyrics are generated by artificial intelligence.

On Friday, the “upcoming artist” and new signee dropped a single called “Florida Water” featuring human rapper Gunna and Clix, a pro gamer. The collab was produced by "Mixtape King" DJ Holiday and by Turbo, known for his work with Young Thug and Travis Scott.

“I feel like this is just an evolution of that,” Dee says.

The promoter says Capitol is far from the only industry giant embracing artificial creators. Dee says when she worked with Sony at SXSW Festival in 2019, the company was testing out a product that would replace music producers.

“They literally gathered all kinds of data on what production sounds were popular and had a computer put together a composition, and it wasn't awful,” she says.

Dee also points to the AI-generated art currently flooding social media and to Travis Scott’s massively popular virtual concert, which he put on inside the game Fortnight in 2020.

“AI is the next wave; we've been seeing it for a while now, and there's literally no stopping it,” Dee says. “But I don't think it will ever replace actual talent. Gunna and Turbo/DJ Holiday are behind this ‘artist’ as well as a Fortnite player, so it's not all AI in my opinion.”
Dallas hip-hop artist Buffalo Black, who’s earned high praise for his lyrical chops, says the whole idea of robot rappers is "interesting," but “honestly sounds like a gimmick.”

The rapper is not particularly against the technology behind the collaboration, but is unimpressed with the result.

“I’ve heard of AI-generated software doing vocalizations,” he says. “As a song itself it’s trash. Cool concept, though.”

Ryan Ruden, the executive vice president of experiential marketing and business development for Capitol, told Music Business Worldwide that Meka “meets at the intersection of music, technology and gaming culture” and that the addition of a virtual artist to the label’s roster was an “evolution of Capitol Records’ 80-year history of innovation.”

Ruden has a history running musical projects that employ virtual reality. He was a co-producer on the first virtual concert on Roblox with Lil Nas X, and was a lead organizer of the first live concert in Fortnite.

“We knew this was on the horizon with everything that has been going with the holograms and such,” she says. “Not sure if this is something I will enjoy, as I love the true art and really enjoy live concerts.”

Carcione adds that the presence of AI in the creative field, and in hip-hop culture specifically, will be a double-edged sword. But like Buffalo Black, she finds this release in particular underwhelming.

“As far as this particular AI artist, the music is not my vibe at the moment,” she says. “I’m interested to see what the world will do and how it will adapt to music … perhaps they already have.”

Since they first formed over a century ago, record labels have influenced the soundscape, dictating which songs are tied to our memories and which artists received our support. Thanks to social media and streaming, record labels are no longer the main gatekeepers on the road to stardom; artists don't need to wait be discovered or to earn the corporate approval of executives. But getting signed by a major record label still comes with an investment artists are unlikely to get independently, and with the support of massive marketing think tanks that help push them along.

For this reason, social media became filled with comments from music fans opposed to Capitol taking on an AI-generated “artist” instead of a real-life artist with real-life bills — you know, musicians who use AI only to spam their Facebook friends with concert invitations, not to write their work.

As Dee points out, maybe it was only a matter of time before technology invaded the last space we believed was solely dependent on human emotion: art-making.

“The kids of today live in virtual reality,” Dee says. “It's just like every other thing in technology, art, music, and culture. Get with the times or get left behind, until you're resurrected again like we've seen with vinyl and Polaroid and film cameras.”
KEEP THE DALLAS OBSERVER FREE... Since we started the Dallas Observer, it has been defined as the free, independent voice of Dallas, and we'd like to keep it that way. With local media under siege, it's more important than ever for us to rally support behind funding our local journalism. You can help by participating in our "I Support" program, allowing us to keep offering readers access to our incisive coverage of local news, food and culture with no paywalls.
Make a one-time donation today for as little as $1.