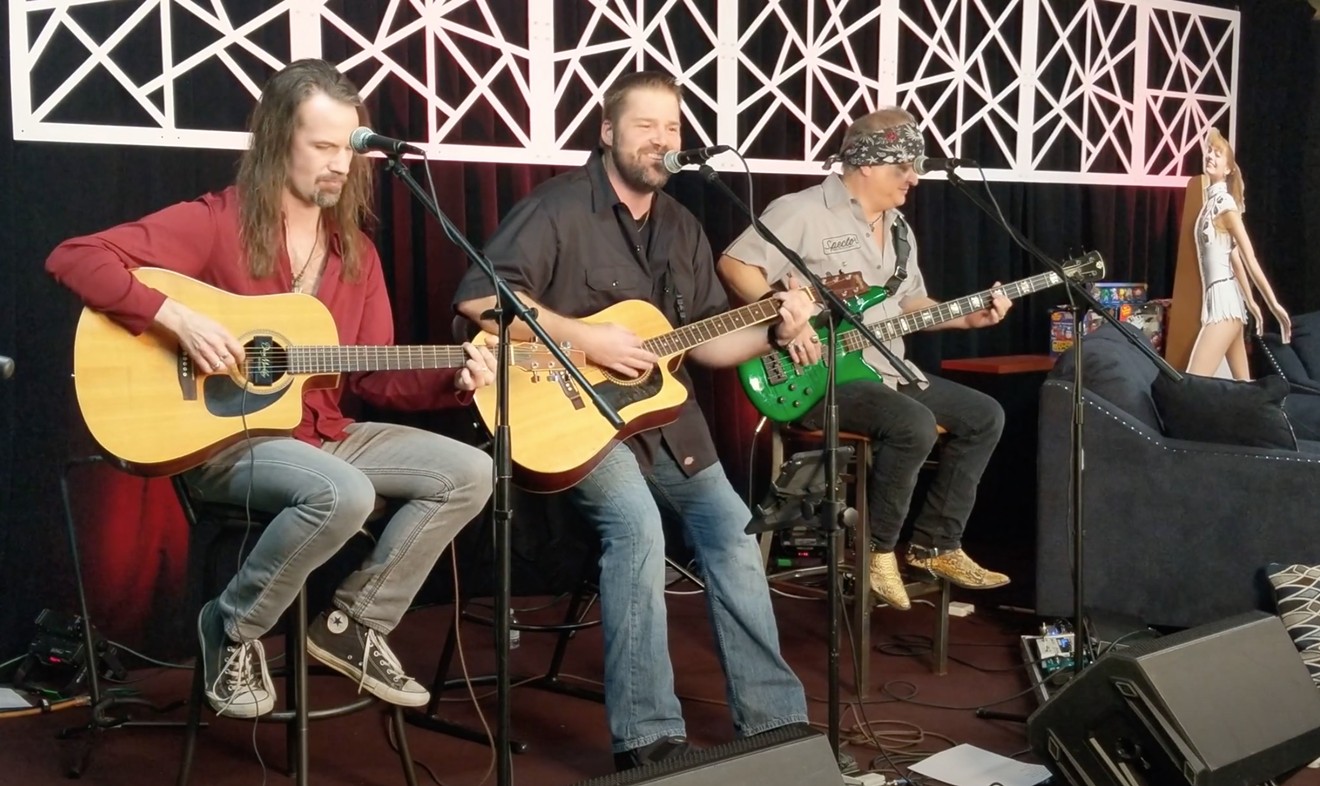 Ryan Cassidy (left), Chance Munsterman (middle) and Mike Freed (right) perform during the first Who Needs Sleep telethon in 2017. Screenshot by Chance Munsterman
The opportunities for bands have been severely limited this past year because ... do we really have to explain why at this point? It's 2020. It's what would happen if sadness broke the laws of quantum mechanics to become a measurable space in time.

One annual showcase that hasn't been affected by the year of the charred rat is Who Needs Sleep, a 36-hour telethon broadcast online that showcases lively discussions, celebrity interviews and local musical talent running from 8 a.m. Saturday, Dec. 5, through 8 p.m. Sunday, Dec. 6. The telethon raises money for cancer relief charities and clinics including Cancer Support Community North Texas and the Hematology & Oncology Center at Cook Children's in Fort Worth.

"Everything came together really well this year," says Rob Ervin, the president of the charity's board of directors. "For the last couple of weeks, the stress level has been a lot lower as we get closer."

Even though the telethon won't be able to have a live audience for its musical performances live from the Music City Mall in Lewisville, it will still feature some of the best examples of Dallas-Fort Worth's musical talent, including singers and guitarists Sean Cole and Chance Munsterman and the rock band Delta Rage fronted by guitarist Ryan Cassidy, bassist Jay Harris and drummer Brent Davis.

"Pretty much all of us involved in the deal are musicians one way or another," Ervin says. "It's a way to feature our friends on a bigger platform who are incredibly talented. Anything we could do to help them expand their fan base and feature them on a larger stage, we're happy to do it."
click to enlarge


Cole, who will do solo and duo performances with Meghan Palla, says he's done the WNS telethon every year since its founding in 2017. This will also be the first show he's done for a live audience in a long time and he's grateful for the chance to do it.

"It's been awesome," Cole says. "Each year, it's been a little different. The venue changed each year but the program itself, it stays pretty consistent and they always do a good job raising a bunch of money. It's great to be involved with it every year."

Munsterman, who pre-recorded his performance for the telethon and has been doing live performances called Live at Chance's House once a week on his social media channels, says the telethon has grown so much in the last four years and is "constantly evolving and changing."

"This year is gonna be just as great because we're still going to be able to provide some quality entertainment ... but we just have to do it a little different," Munsterman says. "I think this is going to be the best show yet."

Cassidy says this will be his second performance at WNS and he's honored to play for such an important cause.

"It's just an honor," Cassidy says. "Everybody knows someone affected by cancer. My drummer's mother passed away from cancer so it's very special for him."

The fact that the show is still going on even during one of modern history's most challenging years is an encouraging sign.

"We've been very fortunate this year to have the love and support we've got that made the show come together really well," Ervin says. "We've been waiting for the other shoe to drop for the last four days but it's not."

Even though the show won't be in front of a live crowd this year, Cole says he gets the same feelings of anticipation before a show in front of a crowd in the same room — a welcoming feeling.

"It's a little nerve racking in some ways having not played in a while and getting back into the groove of playing shows and stuff but I've always felt comfortable in that environment," Cole says. "If there is any show I'm going to play in a pandemic towards the end, I'm glad it's WNS. It's always a good time."

The Who Needs Sleep telethon will run from 8 a.m. Saturday–8 p.m. Sunday. Viewers can watch the live broadcast and make donations to raise money for Cancer Support Community North Texas and the Hematology & Oncology Center at Cook Children's in Fort Worth at whoneedssleep.org.
KEEP THE DALLAS OBSERVER FREE... Since we started the Dallas Observer, it has been defined as the free, independent voice of Dallas, and we'd like to keep it that way. With local media under siege, it's more important than ever for us to rally support behind funding our local journalism. You can help by participating in our "I Support" program, allowing us to keep offering readers access to our incisive coverage of local news, food and culture with no paywalls.
Make a one-time donation today for as little as $1.