Barton, Farenthold, Clinton: How Do We Rank Their Rank Hypocrisy? 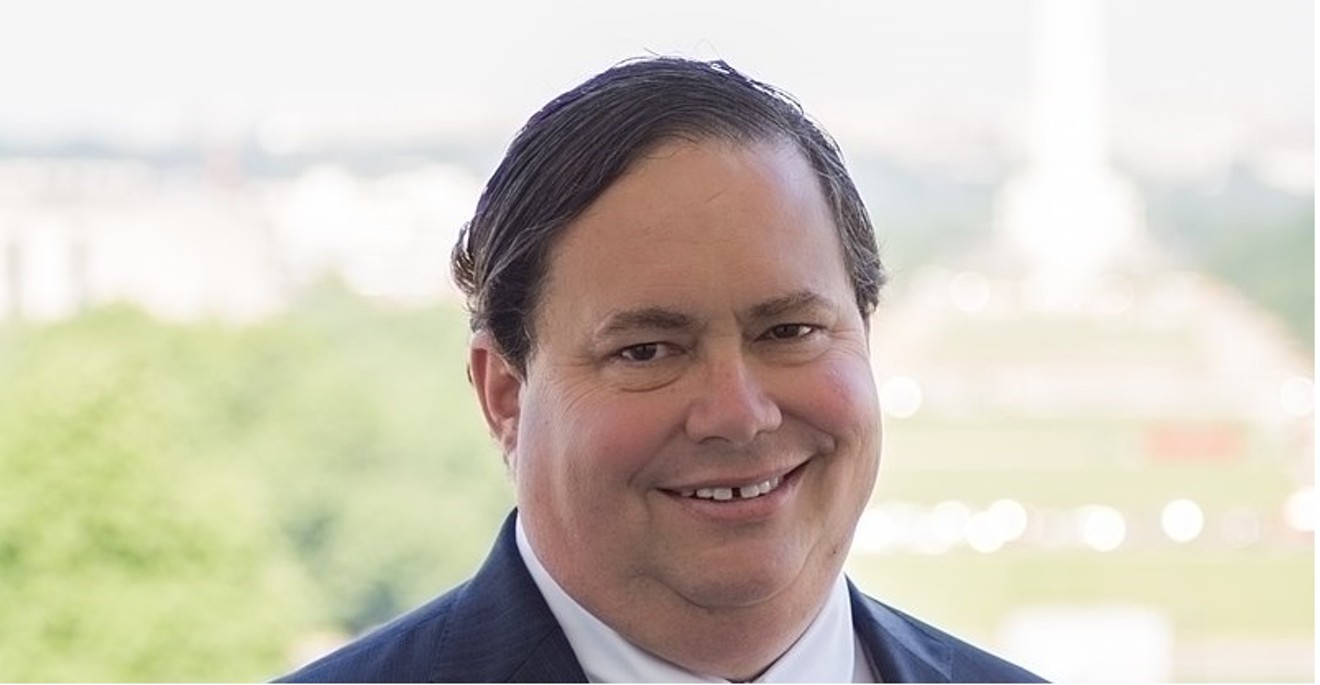 Pour some booze in U.S. Rep. Blake Farenthold, then run as fast as you can. official photograph, United States Congress
This last week has caused me to think about something that really never occurred to me before. Maybe it should have. So now I wonder whether U.S. Reps. Joe Barton and Blake Farenthold are bigger hypocrites than former President Bill Clinton. Are they the same grade of hypocrite? Are they less hypocritical than Clinton? Is it a Texas thing?

Clinton had a sexual relationship with Monica Lewinsky, an intern, then lied about it. Barton was caught sending photographs of his penis to a woman not his wife. His first ex-wife now calls Barton’s condemnations of Clinton over Lewinsky “laughable” given Barton's “double life.”

Farenthold is one of those congressmen who billed the taxpayers for a settlement he had to pay in a sexual harassment case. That case and others have produced a picture of Farenthold as a kind of drunken leg-humping dog.

You may ask who cares. A hypocrite's a hypocrite, right? Do we really have to compare? Well, of course we don’t have to, but it’s worth knowing, I think, that meaningful comparisons exist. According to some recent research, there are hypocrites, and then there are hypocrites.

Four scholars in the law school and the department of psychology at Yale University published a paper last January titled “Why Do We Hate Hypocrites? Evidence for a Theory of False Signaling.” They examined the way people react to and think about different kinds of hypocrites.

For example, some hypocrites present themselves as goody-two-shoes while secretly engaging in not-so-good behavior, but they haven’t expended a whole lot of energy beforehand trumpeting their virtue. They especially have not devoted energy to condemning the morality of others.

The Yale scholars also looked at the type who trumpet and condemn, who stick their noses into other people’s moral business and loudly denounce their lapses. I think that one may be a bit of a Texas thing, maybe not. I will leave that for you to decide.

Both Barton and Farenthold have practically built their political careers on condemning the behavior of others and even on trying to make other people’s private behavior against the law, especially in the areas of abortion and same-sex marriage. They have done so in the name of something they call Christian family values. Both also have sought the collapsing of the boundary between church and state in order to make government more obedient to Christian dogma. 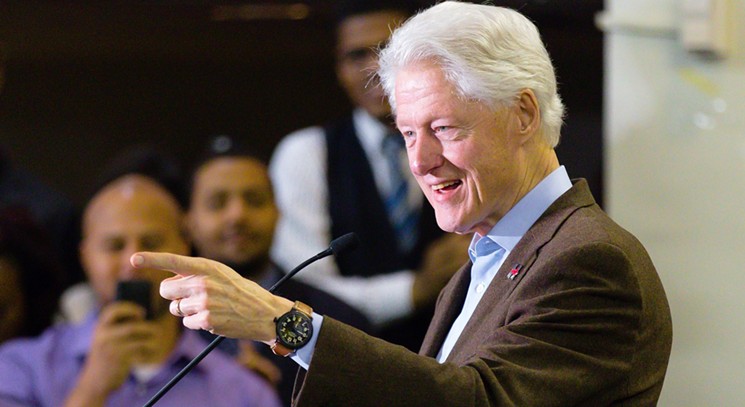 Bill Clinton always seemed to be saying, "I'm gonna do my best, but, you know ... ."
Mikel Galicia
The Yale researchers found that condemnation of others is less important for what it says about the people condemned than for what it says about the person condemning. Condemnation is a signal or promise about the moral rectitude of the person condemning. The “false signaling” in the title of the article refers to the way other people view condemnation and how they feel when they find out the austere condemner has been sending photographs of his penis to women not his wife.

Onlookers often take condemnation of other people’s morals often as a good thing, at least at first. It’s an act of preaching and leadership, a moral example. By condemning others, the speaker signals that he stands on a lofty moral ground and looks down on lesser beings. He is the stern father, the formidable mother who is not putting up with nonsense from the children. The condemnation of others, especially when it is public, is a personal vow, a promise that one’s own character is woven of a finer cloth.

People are all that much more angry, then, when the Great Denouncer is revealed as a person who sends photographs of his penis to women not his wife or as a drunken predator behind closed doors. These hypocrites, the denouncers of others, inspire moral outrage, the Yale authors say, “because they dishonestly signal their moral goodness — that is, their condemnation of immoral behavior signals that they are morally upright, but they fail to act in accordance with these signals.”

Dear Apple: My iPhone is stuck on selfie, and at the worst times! Sincerely, Joe B.
Jonathan Ernst/Reuters/Newscom
My bias as a liberal would be that Clinton falls squarely within the realm of hypocrisy because his personal behavior violated liberal principles, but the question would be the type and degree of hypocrisy.

Clinton and his fellow thinkers didn’t go around pre-Lewinsky raining down verbal fire and brimstone on people for sexual lapses, but in general, he and his ilk tend to communicate a clear disdain for people who fail to live up to their own moral standards. As a kind of shorthand, let’s just call those people who don’t come up to the liberal mark “the deplorables.”

The deplorables are deplorable not because they engage in sex the wrong way but because they fail to recognize the freedom, dignity and equality of the sexes. We could probably picture the Clinton view as the set of values he almost certainly strove to impart to his daughter. He obviously taught her that she needed to believe in her own dignity and carry herself with purpose in life. He would never have wanted her to be degraded or exploited by some arrogant hound-dog male boss.


Because Clinton’s behavior with Monica Lewinsky directly betrayed the values espoused by him, by his wife and by like-minded people, he can’t be viewed as anything but a hypocrite, at least on those grounds.

Because Clinton’s behavior with Monica Lewinsky directly betrayed the values espoused by him, by his wife and by like-minded people, he can’t be viewed as anything but a hypocrite, at least on those grounds. But is he any different — more to the point, any better — than Barton and Farenthold?

I think he may be. I realize we’re on a very fine point here, and I should tell you, again, that I come at this from a personal liberal perspective. I absolutely get that conservatives feel entitled to invoke Clinton’s hypocrisy every time I bring up Joe Barton. I even think that’s fair. Let’s stipulate to this much: They’re all hypocrites, the bunch of them.

But if we were to use the Yale scholars’ principle of false signaling as a yardstick, then we should ask who gave the biggest false signals, especially through the aggressive condemnation of others. Sure, Hillary Clinton calling Trump supporters " a basket of deplorables" was unfortunate, but that was a snotty remark, hardly rising to the level of a sustained campaign to erode the separation of church and state.

Because people like Barton and Farenthold have made their careers on condemnation, seeking to use government as a lash to punish sinners, their own promises about their own characters have been much grander than Bill Clinton’s. Something about Clinton always said, “I’m sure gonna do my best,” but he never said, “I am a high and holy priest, and I want to amend the Constitution to punish you for what you do in the bedroom.” That’s actually a difference.

As for whether we have any kind of lock on flamboyant hypocrisy in Texas, I could never agree to that because that would require me to forget about Roy “Banned from the Mall” Moore in Alabama and Tim “No Abortions Except for My Girlfriend” Murphy in Pennsylvania.

The worst kinds of hypocrisy are not geo-specific, but they sure do seem to be easier to identify on CNN these days. Pretty much any time somebody starts thumping the Bible and waving the flag at me at the same time, I count the beats before he gets caught in Bangkok with a rent-boy. It’s not always the Bartons, the Farentholds, the Moores or the Murphys. But they certainly seem to be the most odious.