One of the impromptu memorials in front of Jack Evans Police headquarters on July 9, 2016. Stephen Young
On June 28, the Dallas City Council will have the chance to sign off on the city's first permanent memorial to the five Dallas police officers killed July 7 last year. The proposed memorial sculpture will sit in front of the flagpoles at Jack Evans Police Headquarters in the Cedars, and will cost of $400,000.

A private nonprofit corporation, funded by anonymous donors, will cover the $400,000 plus an additional $40,000 for memorial's ongoing upkeep.

The proposed sculpture.
City of Dallas
The nonprofit has commissioned Barvo Walker, the sculptor who created the statue of former Mayor J. Erik Jonsson that presides over Dallas City Hall's lobby, to complete the project. Walker's sculpture, as proposed to city staff, will be limestone with bronze figurative relief and between 10 feet and 12 feet tall. It will sit on a 6-foot by 8-foot base and include likenesses of each of the officers killed last year. The Dallas city skyline will feature in the background behind the officers. 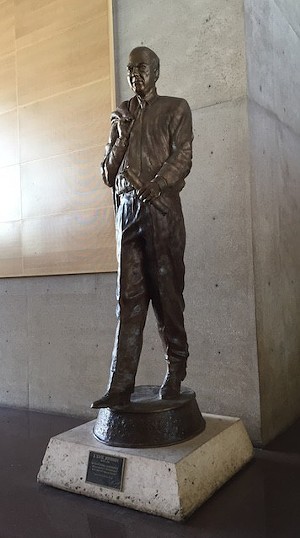 Barvo Walker's sculpture of J. Erik Jonsson.
Jane R. Leblanc
Each of the dead officers families have given permission for their relative's likeness to be used in the sculpture, according to the city.

Last month, Walker told the city's Cultural Affairs Commission that he anticipates the sculpture could be installed as early as next year.

"We could have some sort of groundbreaking this July 7," he said. "We'll install it next July 7, which will give ample time to do it right."

Walker said that he contacted the city about doing a piece memorializing those killed just after the ambush last July. Since January, he's worked with the Dallas Police Department to find a design that's acceptable to the department and the families of the fallen officers.

The site of the proposed sculpture.
City of Dallas
KEEP THE DALLAS OBSERVER FREE... Since we started the Dallas Observer, it has been defined as the free, independent voice of Dallas, and we'd like to keep it that way. With local media under siege, it's more important than ever for us to rally support behind funding our local journalism. You can help by participating in our "I Support" program, allowing us to keep offering readers access to our incisive coverage of local news, food and culture with no paywalls.
Make a one-time donation today for as little as $1.