Dave Lieber dishes it out, but when it's time for him to answer a question, he's all bawk-bawk-bawk. Apologies to Lisa F. Henry, Shutterstock
Local politics is always tough because it’s hand-to-hand, close-quarters, the difference between a guided missile attack and a whack on the head with a bludgeon. But that doesn’t mean there are no limits.

Last May, Dave Lieber, the consumer watchdog columnist at The Dallas Morning News, wrote a story in which he broadly suggested a link between veteran Dallas political consultant C.P. Henry and a pornography attack in the hacking of a campaign website. Lieber’s story encouraged readers to believe that Henry had used pornography to damage an opposing candidate.

Most Americans are aware by now that hacking is a major element on the global political landscape. The average person — but especially a consumer watchdog — might pause at any instance of obvious hacking and reflect on the difficulty of knowing who or what may be behind it.

A personal disclosure: Davenport and I have known each other for some years. We had either lunch or breakfast together, can’t remember which, one time, to talk about Richardson. She and I are about 2 billion miles apart philosophically, but she’s an interesting, smart person, and I like her.

Here are excerpts from what Lieber wrote about Davenport’s experiences as a candidate:

“Davenport's campaign website was hacked and replaced with pornography. She also received an anonymous tweet while at a school board meeting. (‘I see you @lynndavenport....you didn't want to tell others about your secret?’)

“She asked a uniformed Richardson police officer at the meeting to walk her to her car.

“Those are only a few of the incidents that this outsider faced in her campaign. But this isn't really about Lynn Davenport and Richardson ISD. This could and does happen across the state, as school district political machines work overtime to protect the status quo.

“Her problems stemmed, she believes, from her opponent's veteran political consultant, C.P. Henry of Dallas.”


Lieber says Davenport told him that Henry told her at a meeting: “I don’t draw first blood.” It’s the kind of thing Henry says all the time, semi-joke, semi-warning. It’s typical political, excessively gladiatorial speak. But Lieber interprets it for us as meaning, “First blood. All bets are off.”

Additional personal disclosure: I have known Henry forever. He is a veteran mainstream political consultant who has worked locally in nonpartisan and Republican races, always on a more establishment conservative side of the street than mine. We have been what I would call worthy and mutually respectful adversaries. He’s a good debater.

Just to check myself, however, I ran some traps with other local political consultants, some of whom have worked against Henry in opposing camps, to ask if anybody could imagine him involved in a pornography hack. These people never want to be quoted, and I regret introducing an unnamed source into a story like this, but I must summarize what I was told with the reaction of a single consultant. He listened to me and then said, “Has C.P. even learned how to do email yet?”

At the time of the hacking of Davenport’s site in February, a number of websites devoted to internet security news carried stories about something called a “zero day flaw” in WordPress, a consumer software package commonly used in do-it-yourself websites like Davenport’s campaign site. The effect of the hack was to redirect visitors to pornography sites. Speculation about who was behind the hack ran from Russians to what seemed to me like the more likely and usual suspects — pornographers.

“They said, ‘Hey, Lynn, I tried to go to your website, and it’s taking me to something gross.’ So I never actually saw what it was,” she said.

She said the pornography did not show up on her computer.

Davenport is clear: She does not believe that Henry had anything to do with the pornography hack.

“I don’t know that it was all the same people, nor did I ever insinuate that it was C.P. Henry that did it. C.P. Henry just worked for my opponent,” she said.

She and I went over that point a few times.

Unless you read Dave Lieber. The headline on his piece about Henry and Davenport was: “Despite threats and reputation destruction, Richardson ISD candidate stands up to the establishment.” The piece closely followed a line Lieber has been pitching in occasional columns and stories to the effect that the Texas system of public education is a self-serving, massively intransigent, bureaucratic and political behemoth devoted only to its own survival and comfort.

I agree with all that.

Lieber ties all of that into a dark conspiratorial view in which cloak-and-dagger skullduggery lurks behind every tree. I agree with that, too. Mostly. A lot. Often.

But you still have to be careful what you say about people. You can’t take a guy like C.P. Henry, who is a respectable, normal, decent human being and member of the community, and imply broadly in the newspaper that he’s a pornographer unless you can prove it dead to rights. You especially can’t do it if a little bit of Google ingenuity would have shown you there was a national WordPress hack going on.

My impression from reading Lieber’s piece is that he wanted Henry to be a hacker really badly in order to buttress a line Lieber preaches about public education: “That's the problem with many school districts in Texas,” he says. “If you buck the party line, you pay a price. That price comes in many ways — from social ostracism to rumors designed to damage a volunteer board member's reputation.”

Lieber, who was a consumer watchdog at the Fort Worth Star-Telegram before the News, seems sublimely unaware that what he’s talking about is called politics. The perils he describes — ostracism, rumors, personal attacks — are the price of admission for political activity. If you can’t pay that price, if you can’t stand up to it and prevail against it, then you need to stay out of politics — which, by the way, sounds like a great place for Lieber. 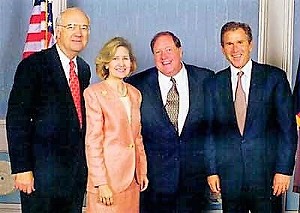 C.P. Henry, second from right, in days of mainstream yore.
cphenryhs
But even at that, there are still limits. You can’t just make up the most awful thing you can imagine about somebody and then slap it in the newspaper like it’s a joke. And if hacking is going to continue to be the most important element on the political horizon, then we all have an even greater obligation to treat it soberly and with extreme caution.

“I’d probably walk away from all this tomorrow,” Henry told me last week, “and just go work in the nonprofit arena. It makes you want to get out of this. It’s on both sides. It’s just gotten so acerbic and vitriolic.”

I started Friday trying to reach Lieber through his email and voicemail but also through an editor at the News and through Lieber’s assistant. I sent a full description of what I was up to and wanted to write about, so there could be no suggestion of ambush. I asked Lieber for permission to use his Superman photo of himself, and I reminded him again an hour and a half before my deadline that we needed to talk.

I never heard back. That means, among other things, I did not get permission to use the Superman photo, which is OK. It might be time to retire that one anyway. I’m thinking something more in the line of a chicken suit might be appropriate. Bawk-bawk.