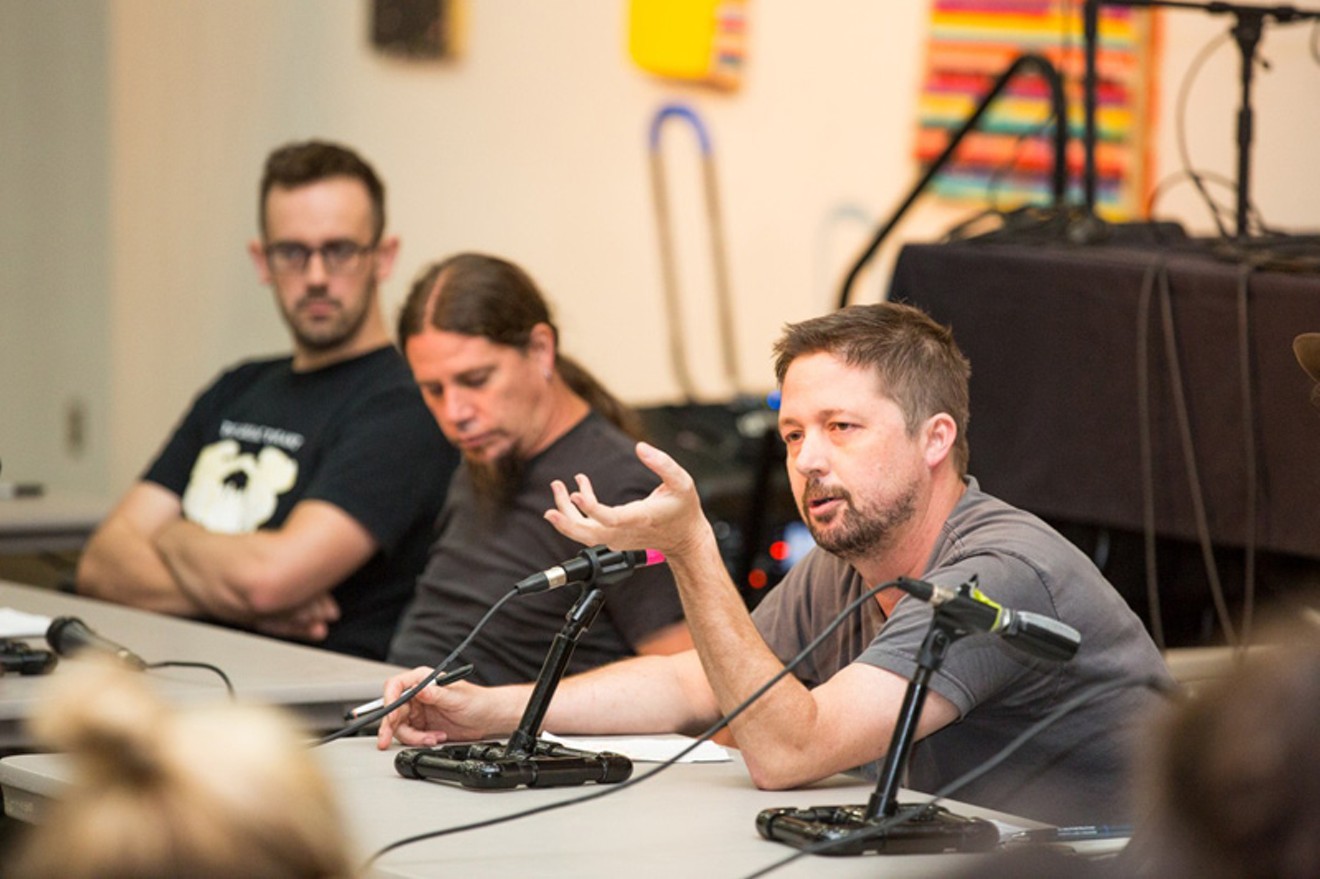 Joshua Baish, former owner of the Denton venue Rubber Gloves, speaks at a meeting. A judge determined that Baish had tried to force one of his 4-year-old daughters to identify as a boy and ordered supervised visitation. Ed Steele
Following a 2017 filled with legal trouble, Joshua Baish, the owner of the now-defunct Rubber Gloves Rehearsal Studios in Denton, kicked off 2018 with an early morning arrest. Baish, according to a Denton County arrest warrant affidavit, punched one of his former employees outside Andy's Bar before hopping in his car drunk and driving to the site of his former concert venue.

Last year, Baish spent nearly two months in jail after being found in contempt of a Denton County court. During a custody dispute with his ex-wife that included accusations that he'd mistreated one of his daughters by allowing her to dress and identify as a boy, Baish wrote about the couple's fight on Facebook, after being told not to do so repeatedly.

Early Friday morning, Zachary Painter, a former employee of Baish's, was smoking a cigarette outside his new job at Andy's Bar when Baish saw him from his silver Prius. Baish got out of his car and confronted Painter. Painter told police that Baish "talked a lot of shit," before shoving him.

Baish then accused Painter of blowing cigarette smoke at him and punched him below his left eye.
click to enlarge

Joshua Baish.
Denton Police Department
Painter told police he believed Baish hit him because Painter had been telling people what a bad boss Baish was at Rubber Gloves, and pointed them in the direction of the venue, to which he said Baish had driven.

A Denton cop found Baish in Rubber Gloves. The officer smelled alcohol on Baish's breath, according to the affidavit, and had him take a field sobriety test, which Baish failed, according to Denton police. Baish then refused to take a breath test and was taken to Denton City Jail. Police charged Baish with assault causing bodily injury and DWI.

The DWI charge is Baish's second. He previously pleaded no contest to to a 2005 DWI charge and was sentenced to probation.