The Hartland Mackie family, which owns 400 Record, threw a lavish party this weekend in anticipation of Bullion's opening. Brian Reinhart
We've been waiting a long time for this. Chef Bruno Davaillon departed the kitchen at The Mansion two years ago, spending his time researching and preparing to open a new restaurant in the renovated 400 Record building. He traveled to France, tasting the latest and greatest foods of a new generation of Parisian bistronomie chefs; he hired Martin Brudnizki, a London-based interior designer, because no designer in Dallas was good enough; and he assembled a dream team of a staff, including Blind Butcher chef Oliver Sitrin and Flora Street Cafe general manager Victor Rojas.

Now, at long last and a year behind schedule, Bullion is ready. With opening tentatively scheduled for the second week of November, the 400 Record building's owners put on a welcome party to show off the restaurant's interior and a little of its food — and they pulled out all the stops.

Most of the guests seemed perfectly at ease in an environment with a 10-piece jazz band playing behind Bullion-branded music stands, buffet line descriptions inscribed on glass Bullion paperweights and acrobats dangling from silks in custom-made Bullion catsuits. Most of the guests seemed untroubled by the party's constant surveillance: a half-dozen roving photographers, a blinking GoPro stashed away in a high window above the oyster bar, a drone whirring along the sidelines.

The dining room at Bullion.
Brian Reinhart
But there had to be a few members of the working classes in attendance, wondering: Who exactly paid for all this? And who paid Davaillon enough salary to spend two years at the height of his career not cooking? 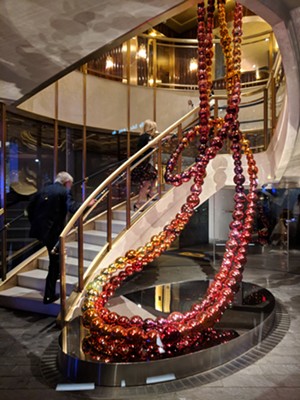 The entry to Bullion, a staircase curling around a sculpture by Jean-Michel Othoniel.
Brian Reinhart
That would be the Hartland-Mackie family. The family, which owns the City Electric Supply chain, purchased and renovated the 400 Record building — all 17 floors of it — and will be using five floors as City Electric Supply's headquarters. It's also starting a new real estate investment firm, Labora, linked to the building and other development projects. And it is very proud both of its renovation work and of the new restaurant the family commissioned from Davaillon, a restaurant for which the goal was perfection at any cost.

Bullion did not show off formal menu previews at its party, but there were rabbit rillettes (a Davaillon mainstay), duck pastrami, tiny puffs of bread oozing comte cheese and Wellfleet oysters freshly shucked at a bar that was, in fact, a huge bar-shaped ice sculpture. Scardello, the beloved cheese shop, was on hand, too.

The restaurant invited guests to peruse its new dining room and lounge. Bullion is literally a gold bar, a second-floor space jutting out of the building's south side, looking suspended in time and sheathed in a scalloped, scaly, gold-colored coating. The entrance is a curved staircase in a glass entryway on the southwest corner, a staircase that curls around a floor-to-ceiling sculpture by French artist Jean-Michel Othoniel.

Art is a big deal at Bullion. Othoniel has had work exhibited at New York's Museum of Modern Art and the Louvre, and the dining room features a 23-foot-wide aluminum and steel sculpture by Kathryn Andrews, who was featured at the Nasher Sculpture Center in fall 2016. Gorgeously textured crimson canvases by the young American artist Matthew Chambers grace one particularly lavish booth. 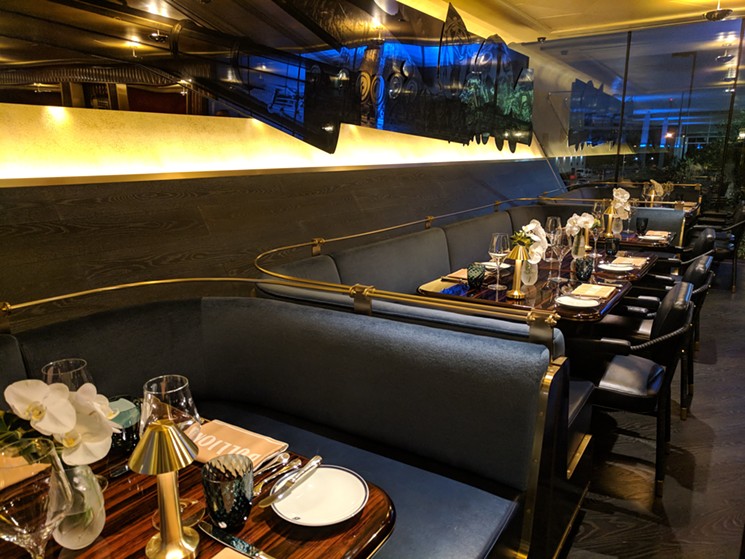 An aluminum and steel artwork by Kathryn Andrews is displayed about booths in Bullion.
Brian Reinhart
The dining room itself feels surprisingly small. The aesthetic is a stylish, successful update of classic French brasseries: warm wood tables and flooring, deep blue leather seats, brass railings along the backs of booths, discreet black stands for handbags, tiny lamps on each table, warmly yellowed lighting to accentuate the golden theme. (Gold accents extend all the way to the edges of the business cards.) The napkins, tackily emblazoned with "BULLION" in giant letters, are the only blemish; a simple monogram would have been more in keeping with the old-fashioned elegance.

We'll be excited to dine here soon. If we have a concern about the interior, as shown off at Friday's party, it's that the space feels slightly cramped: To get the desired number of tables (we counted about 24), Bullion squeezed some together into rows that might politely be called intimate and trimmed walkways to be as narrow as practical. The risk of an acoustical nightmare with so many people dining in close quarters is very real, so we hope that Bullion has invested in substantial sound absorption. But it appears, so far, that it has thought of — and spent money on — every detail. 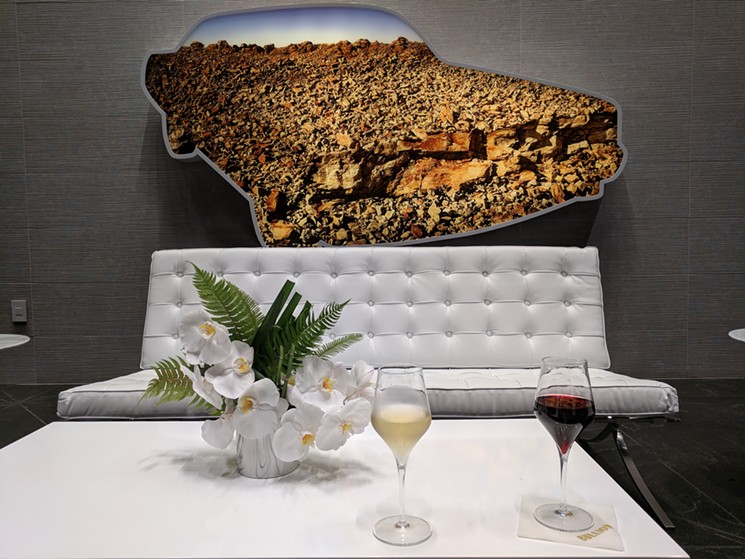