No word yet if you can take your brisket with you on the Ferris wheel. Chris Wolfgang
Many press releases for restaurant openings come across our desks, but when one of them promises a patio with a working 50-foot-tall Ferris wheel, we perk up. Such was the case when we heard of Ferris Wheeler’s Backyard BBQ, which opened this week in the Design District. Besides the obvious carnival ride gimmick, Ferris Wheeler’s promises a stage for live music, plenty of patio games and, most important, some solid Texas barbecue staples. Best of all, you don’t need to load up on coupons from the ticket booth first.

Dallas native Doug Pickering is the pitmaster at Ferris Wheeler’s, but his barbecue influences draw from beyond the Texas borders. Aficionados of smoked meats will detect influences from Kansas City; Memphis, Tennessee; and the Carolinas in Ferris Wheeler’s meats and sauces, as well as the Central Texas style than many of us hold dear. We couldn’t sneak a peak at the smokehouse that’s wrapping up construction, but an offset wood-fired smoker burning Texas post oak is Pickering’s smoking weapon of choice, keeping true to his Texas roots. 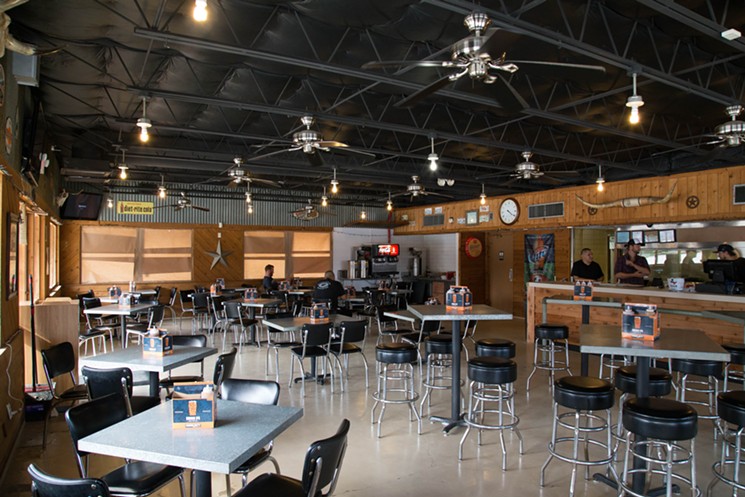 Don't care to sit outside? Ferris Wheeler has you covered with plenty of space inside.
Chris Wolfgang
Inside the main dining room, two dozen or so galvanized metal table tops provide seating for air-conditioned dining comfort while plenty of wood paneling, vintage signage and country music playing overhead reinforce the barbecue joint vibe. Ordering takes place from a counter against one wall, after which diners can grab a number and seat and wait for their food to arrive.

If open-air dining is more your thing, might we suggest a quick stroll around the back of the building to the patio, which will easily seat three times the number of guests as inside. More important, Ferris Wheeler’s patio sports a full walk-up bar with a decent selection of Texas beers on tap and craft cocktails on the drink menu. Waitstaff will kindly take your food orders outside, as well.

Ferris Wheeler's brisket may not be a true Texas style, but we appreciated the moist, smoky flavor and sweet finish.
Chris Wolfgang
If you’re here for food (and even if you’re not, you should be), you’ll find most of the familiar barbecue staples, with meats sold by the half pound and sides a la carte. We ordered a half pound each of lean brisket ($11) and smoked turkey breast ($9), along with a housemade hot link made with beef and pork ($8). Sides will set you back $3 apiece. Already heavy on meats, we went with the jalapeño bacon coleslaw and took our seats.

The brisket sported an impressively dark smoke ring and a thin layer of bark-crusted fat, and we tore into it first. It wasn’t as salty as we expected, which allowed the smokiness of the beef to shine through.

“There’s a lot of salt in the rub,” Pickering says, “but I balance it with a good amount of brown sugar.” Brown sugar in the rub isn’t the Texas way of doing brisket, but the sweetness that comes through in a bite of the melting rendered fat was good.

Smoked turkey and housemade hot links were stars in our book.
Chris Wolfgang
The housemade sausage also hit high marks, with a sharp snap to the casing and a flavorful blend of pork and beef. Fans of smoked turkey won’t be disappointed in Ferris Wheeler’s bird, which sported a peppery, sweet seasoning that set off the extra-moist slices of turkey breast.The jalapeño slaw had just the right amount of kick from the fresh jalapeños in between the cool blend of green and red cabbage and not-too-sweet dressing.

Pickering’s regional barbecue leanings definitely come through in the sauce, and four flavors grace each tabletop. “I don’t wanna say it’s an edge, but other places might have one sauce, maybe two,” Pickering says. “So I was like, 'Let’s do four.’” Ferris Wheeler's Backyard Barbecue has the gimmicks, but the food backs it up.
Chris Wolfgang
There’s a mild Texas tomato-based sauce, a hot variant, a Carolina gold mustard-based sauce and a “Texas gold,” a blend of the mustard- and tomato-based sauces. “All the sauces are my own recipes, but we wanted to try something [with the Texas gold] that would be a good dipping sauce for our okra,” Pickering says. He claims it’s good on anything on the menu, and he's right.

If there was anything that we were left wanting after our visit to Ferris Wheeler’s, it was a spin on the restaurant’s namesake carnival ride. Pickering explained that the wheel, brought in from New Mexico, was still undergoing some tweaks and would be open in a few more days. Ferris Wheeler's patio may be your new favorite spot for barbecue and beverages in Dallas.
Chris Wolfgang
“It’s a little fast right now. It’s been inspected, and it's safe, but we want to work on the brakes a little bit," Pickering says. “But I’ve ridden it, and it’s fun”.

Gimmicks aside, Ferris Wheeler’s food is reason enough to make a return visit.