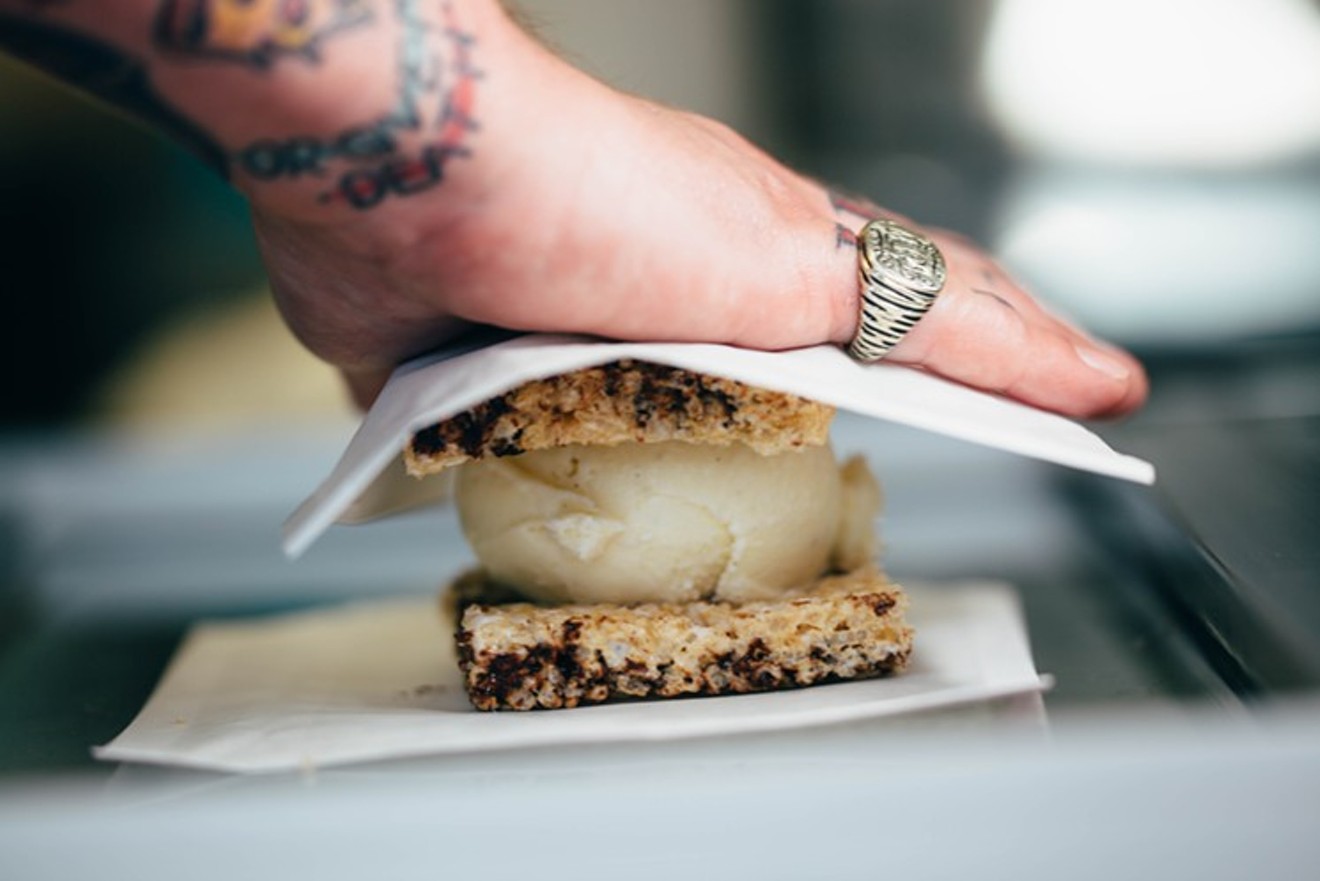 Carnival Barker's has existed in one form or another for five years, but at the end of January, Barker quietly closed the ice cream shop and started selling off his equipment.

"I hoped for a miracle. I hoped things could change," Barker says. "I finally just got to a point where I'm like, I don't have any more money. I can't pay rent here anymore. I know it sounds silly, but I’ve had a second job since October just to pay those bills."

Barker has been open on Jefferson for about two years, but business never got where he needed it to be, he says. And now, as the neighborhood changes around him, he's getting out while he can. "I’m worried about Jefferson," he says of the historically Hispanic boulevard. "I'm worried about my neighbors Small Brew[pub]. I’m worried about the Jamaican place over here. The Jefferson you see here today is not gonna be the same, and I'm getting out because I'm not going to be able to survive that."

Barker isn't the only one who sees the changes coming to this stretch — and he's definitely not the only one who's worried. "Rezoning in 2014 allowed for buildings as high as 20 stories on some parts of the boulevard," Rachel Stone wrote in a recent piece for the Oak Cliff Advocate. "A few buildings are protected from demolition, but by and large, when old buildings are sold off, they could be replaced with new mixed-use buildings between three and 20 stories."

The crane towering over Bishop Arts and the constant flow of construction vehicles signal that change is on its way to that stretch of Oak Cliff, too.

When Barker opened two years ago, after leaving a location at the Truck Yard on Lower Greenville, Barker had high hopes that the Bishop Arts crowd would wander his way. It didn't work out that way, he says. 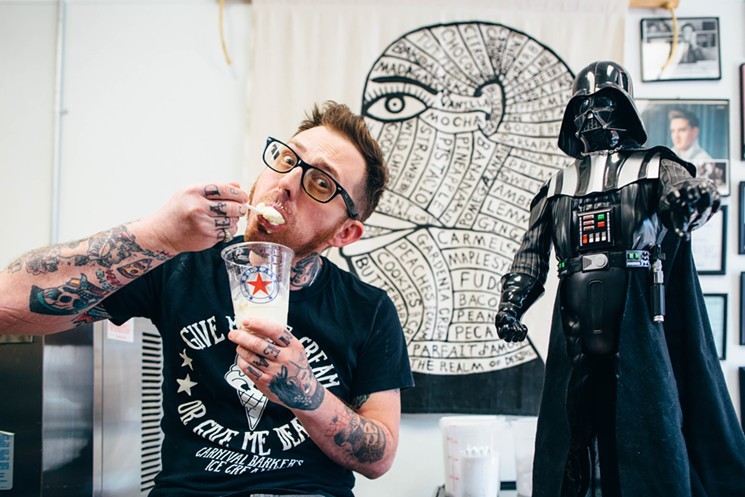 Aaron Barker, owner of Carnival Barker's.
Kathy Tran
"People will come over to Bishop Arts, but they won't come over two blocks this way," Barker says. "I can't make them or ask them or say please. It's just a huge divide."

Carnival Barker's was no typical ice cream shop. Barker would host wild, raucous punk rock shows inside the tiny ice cream parlor, and he'd often load up his meticulously produced ice cream in a small cart to sell at local art openings. The shop was filled with band stickers, cartoon memorabilia and local art, like a massive piece from artist Bruce Lee Webb.

But in the end, as he tries to sell off his livelihood piece by piece, Barker realizes that bringing artisanal ice cream to Jefferson Boulevard may have been a mistake.

"I made a bad business decision. I moved to Oak Cliff," Barker says. "But it was the only decision I could make. I came here, it was a bad decision and I don't blame anyone else but myself."

Even still, Barker says he loves Oak Cliff — he lives in the neighborhood and is a member of the local Oddfellows lodge. "I want the best for Oak Cliff; that's one of the reasons I moved over here," he says. "But Oak Cliff is weird, man. It's just weird right now."

By March 1, Barker hopes to sell off his equipment and empty the space. He'll work his day job while continuing to make the small-batch, barrel-aged extracts he used in his ice cream. He'll keep playing with his band, the Eggshells, and he recently finished a short film, a documentary about the oldest living member of the Oddfellows, that he hopes to screen at the Oak Cliff Film Festival.

But the one thing he doesn't plan to do is make ice cream. Those days are over, he says. "This is a sad day for me," Barker says. "But it is what it is."