The Cheeseburger at Desert Racer Is a Big Mess

The cheeseburger at Desert Racer with added-on green chiles for $17 features a half-pound chuck and shoulder ground patty, shredded lettuce, onion and tomato. Nick Rallo
The restaurants of Nick Badovinus have been blessed with meat.

There is a burger in all corners of his joints, and each specializes in its own feeling of comfort. Off-Site Kitchen is a summertime backyard utopia (see: peanut butter burger). A hulking cheeseburger nested on shredded lettuce, the red onion dressed with oil and vinegar, with Tillamook cheddar, is a mini coastal escape at Montlake Cut — you can nearly hear the boats thunking at the dock nearby.

The cheeseburger at Desert Racer busts this dynasty.

It’s a skyscraper of a burger, designed to draw eyes as it’s walked out of the kitchen, a half-pounder proudly tall and skewered ceremoniously like you’ve ground the beef yourself with the chef.

On a recent visit, the inch of diced green chiles piled on top caused a flurry of “wows,” and dwarfed ceviches and fundidos. The patty was sternly seared and darkly charred on the outside, leading to a mostly pink interior (I asked for medium-rare).

The flavor that hit immediately was burnt beef and blunting salt. It wasn’t grill char — it was overwhelming metallic heat. The salt level was numbing. Unlike the Montlake Cut cheeseburger, which has a nest of iceberg lettuce and onion that has a fresh crunch, this onion-lettuce was so finely cut it turned to hot mush. The half-pound patty Hulk-punched the bun, blasting apart the bready bookends, and it all became a burger-green chili salad.

It’s not easy to dislike a burger that has options like this: For $4 more, you can top your half-pounder with a four-cheese enchilada. The crinkle-cut fries are an ode to the frozen stuff we had as kids. The mayonnaise-y dipping sauce, both tangy and sweet, brings back memories of the good old-fashioned make-your-own-dipping-sauce-with-condiments-in-the-fridge.

It all acted like a cheeseburger that’s trying hard to impress: a giant burger with a ton of lettuce and salt and green chiles and char. His other restaurants achieve more with less. Sparks of flavor are found in restraint. 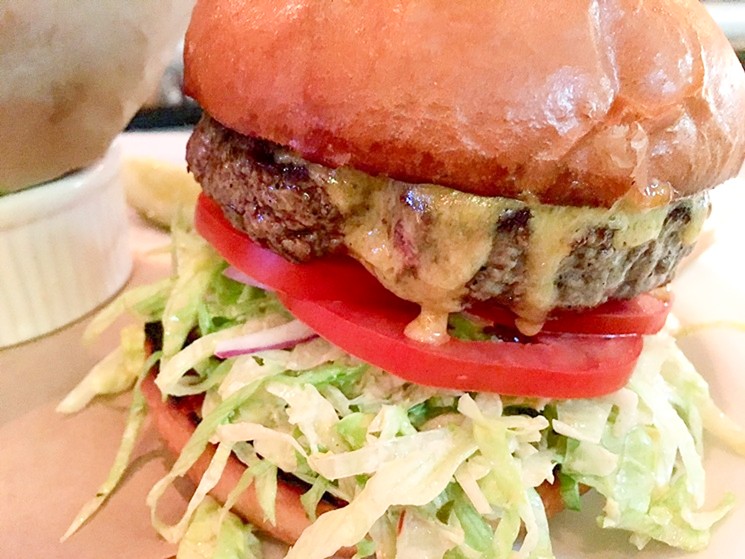 Desert Racer’s burger clocks in at 15 bucks, which feels, somehow, like shelling out the big bucks despite the size. It’s about the experience — we’ll pay to escape to the arms of a good cheeseburger.

The Badovinus restaurants know exactly how to ring the part of our brains that responds to comfort food. The point here is, it doesn’t need to ring it so intensely and loudly that our heads explode.

Desert Racer, 1520 Greenville Ave. (East Dallas)
KEEP THE DALLAS OBSERVER FREE... Since we started the Dallas Observer, it has been defined as the free, independent voice of Dallas, and we'd like to keep it that way. With local media under siege, it's more important than ever for us to rally support behind funding our local journalism. You can help by participating in our "I Support" program, allowing us to keep offering readers access to our incisive coverage of local news, food and culture with no paywalls.
Make a one-time donation today for as little as $1.
Nick Rallo
Contact: Nick Rallo