Dallas Chefs Pitch in for RMHD Cookbook, and It's a Gem

The cookbook celebrates 40 years of the Ronald McDonald House of Dallas. Lauren Drewes Daniels
A gem of a cookbook was recently released brimming with beautiful photos and recipes from some of Dallas' most prized chefs. Best of all, it's for a good cause.

Over the past 40 years, the Ronald McDonald House of Dallas (RMHD) has welcomed 40,000 families seeking medical care locally. As a tribute to the importance of RMHD, 40 local chefs have contributed to Come to the Table, a cookbook that is a mix of recipes found in local restaurants and bakeries along with some classic family dishes from chefs.

We were able to take a peek at a just-released copy, and it's lovely.

Come to the Table is broken into three sections: Baking… and I Helped, Family Classics and Simply Standard Staples. 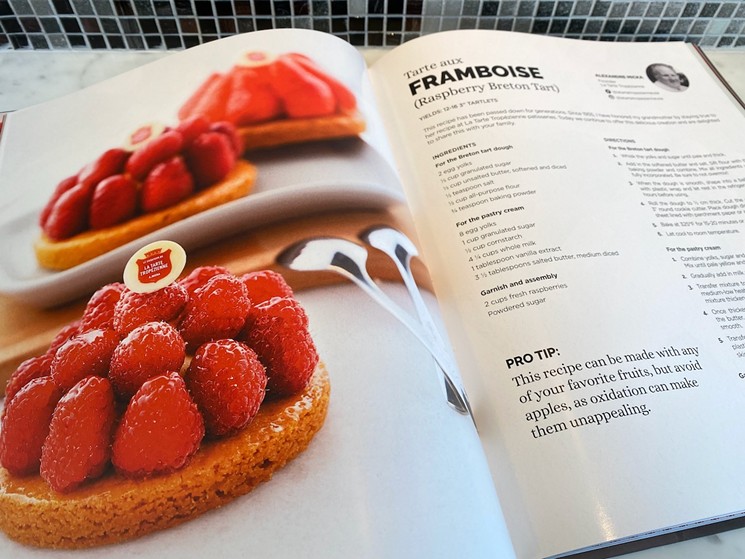 
There's also a tarte aux framboise from La Tarte Tropézienne, a Saint-Tropez bakery that opened its first-ever location outside of France in downtown Dallas last year and is known to be pretty mum about its recipes. It's a beautiful book all the way around, even better that it's a highlight reel of some Dallas culinary gems; and it supports the RMHD. Get one here.

Soon there should be a schedule of book signings at various restaurants, for more information about that, visit RMH Dallas.

If you're inclined to try some of these restaurants, like La Tarte Tropézienne, check out the full lineup for Dallas Observer's Morning After Brunch, which is Sept. 12 at Dallas Farmers Market.
KEEP THE DALLAS OBSERVER FREE... Since we started the Dallas Observer, it has been defined as the free, independent voice of Dallas, and we'd like to keep it that way. With local media under siege, it's more important than ever for us to rally support behind funding our local journalism. You can help by participating in our "I Support" program, allowing us to keep offering readers access to our incisive coverage of local news, food and culture with no paywalls.
Make a one-time donation today for as little as $1.