There’s a window that shows off all of the bars and cookies her team has freshly prepared, but Bautista wants to make sure they focus on the ice cream.

After all, that’s where the ube is.

A simple exterior may cause you to miss it. Don't.
Taylor Adams
Ube is purple yam. It turns up in desserts in the Philippines, where Bautista’s parents are from.

Bautista is the chef and owner of Devious Desserts and Creamery in Carrollton. It’s in a simple strip mall at North Josey Lane and East Rosemeade Parkway. If you let your eyes skip over the exterior, you’d miss some unique flavors you won’t find in other ice cream shops in the Dallas area.

“I like to call this an anti-bake shop,” Bautista, 43, says. “We’re an ice cream shop first and foremost; we just happen to cook all the things that go well with ice cream.” 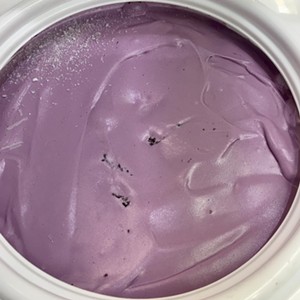 Don't let the color throw you off: the ube ice cream is a must-try.
Devious Desserts and Creamery
The ube is truly a must-try. This purple yam ice cream may sound nothing but weird to you, but it creates a texture that you can’t get enough of, and the subtle sweetness pairs perfectly with the starch. Think of sweet potato pie, but elevated in flavor and color.

If you follow this sound advice, do it quickly. She gets the ube paste from her father when he comes to Dallas from his home in the Philippines, and the ice cream in the shop at the time of this article was the last she had on-hand.

Ube is something that’s been done well in the Philippines, and it’s something Dallas-area residents can get here now. Ube is one ingredient found in halo-halo, a dessert you’ll find if you spend any time on the island of Luzon. It’s nearly anything one might think of with ice cream: evaporated milk, some sweetened beans, flan, shaved ice and seemingly whatever else can fit in the cup.

“It’s going to happen,” Bautista says of halo-halo in her ice cream flavors. “I think the Filipinos will really be excited for it.”

Bautista has been able to see a lot of the Filipino community respond well to her flavors, but it’s also presented the opportunity to share some of her native culture with anyone who enters the space.

“There’s a decent culture of foodies in this area, and they’ve been really receptive,” she says. 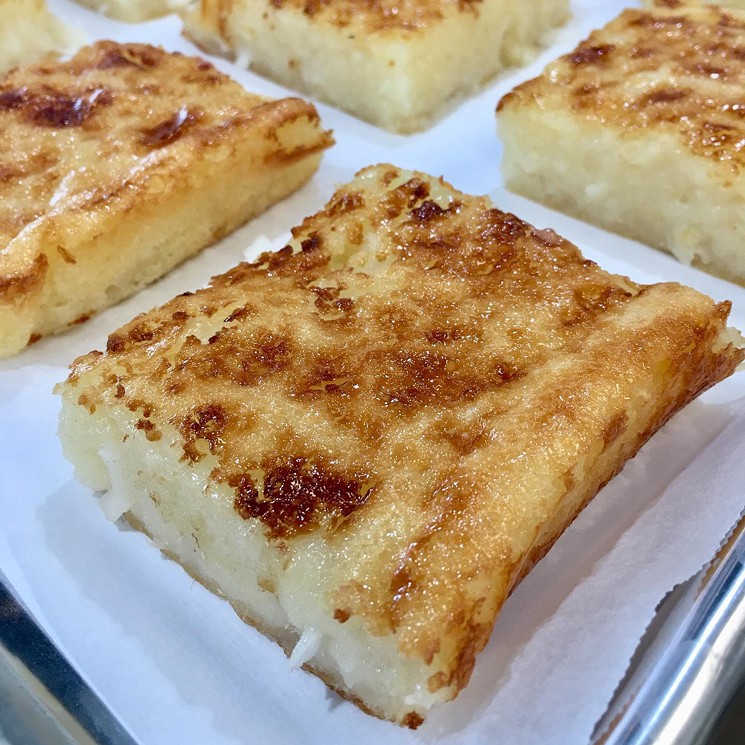 The coconut-cassava cake is popular: this moist Filipino cake is regularly selling out.
Devious Desserts and Creamery
The pineapple pie wasn’t as popular — people kept wanting out-of-season apples — but a surprising customer favorite is her coconut-cassava cake.

It’s a gluten-free, naturally sweetened cake made with coconut and root vegetable cassava. Once people try it, some order by the tray — she has to make one every day.

Bautista is classically trained in pastry. After leaving the corporate world at JC Penney, she studied at the former Le Cordon Bleu in Dallas. She ended up doing pop-ups in Wits End in Deep Ellum for a “rough two years,” serving ice cream from around 7 p.m. to 2 a.m. She also worked as a pastry chef at Nobu.

It was an educational experience for her, both in skill and business. Anyone in the industry can understand when she uses “grueling” when talking about back-of-house.

“The service industry, especially back of house, doesn’t need to be so hostile,” she says. “I’m an adult; we should all be treated as adults.”

That’s what she’s aiming for in her dessert shop, which is just a block from where she and her husband live.

“Do you want to be an inspiration or do you want to lead by fear?” she says. “Here, I’m trying to cultivate a more leadership, career-minded environment.”

Her staff works in an open kitchen to the main area of the dessert shop. Bright colors jump and complement throughout the space and pull you in as soon as you open the door.

For Bautista, that’s a bit of home.

The bright colors of the interior come from Bautista's growing up in Seattle.
Taylor Adams
“It’s my own little piece of Seattle,” she says, noting the city where she spent much of her time growing up. “It’s very reminiscent of coffee shops up there.”

As to what you can find there beyond ube ice cream, the flavors change, depending on the inspiration hitting Bautista. Recently, it included a bright pineapple-mango sorbet, brown-butter pecan that evolves into tasting like toffee and a Vietnamese cinnamon with just the proper presence of the ingredient.

“A lot of my ice creams are familiar with a twist,” she says.

Devious Desserts and Creamery, 3720 N. Josey Lane, Suite 104, Carrollton. 11 a.m.-9 p.m. Tuesday-Thursday, 11 a.m.-10 p.m. Friday-Saturday, 11 a.m.-6 p.m. Sunday.
KEEP THE DALLAS OBSERVER FREE... Since we started the Dallas Observer, it has been defined as the free, independent voice of Dallas, and we'd like to keep it that way. With local media under siege, it's more important than ever for us to rally support behind funding our local journalism. You can help by participating in our "I Support" program, allowing us to keep offering readers access to our incisive coverage of local news, food and culture with no paywalls.
Make a one-time donation today for as little as $1.