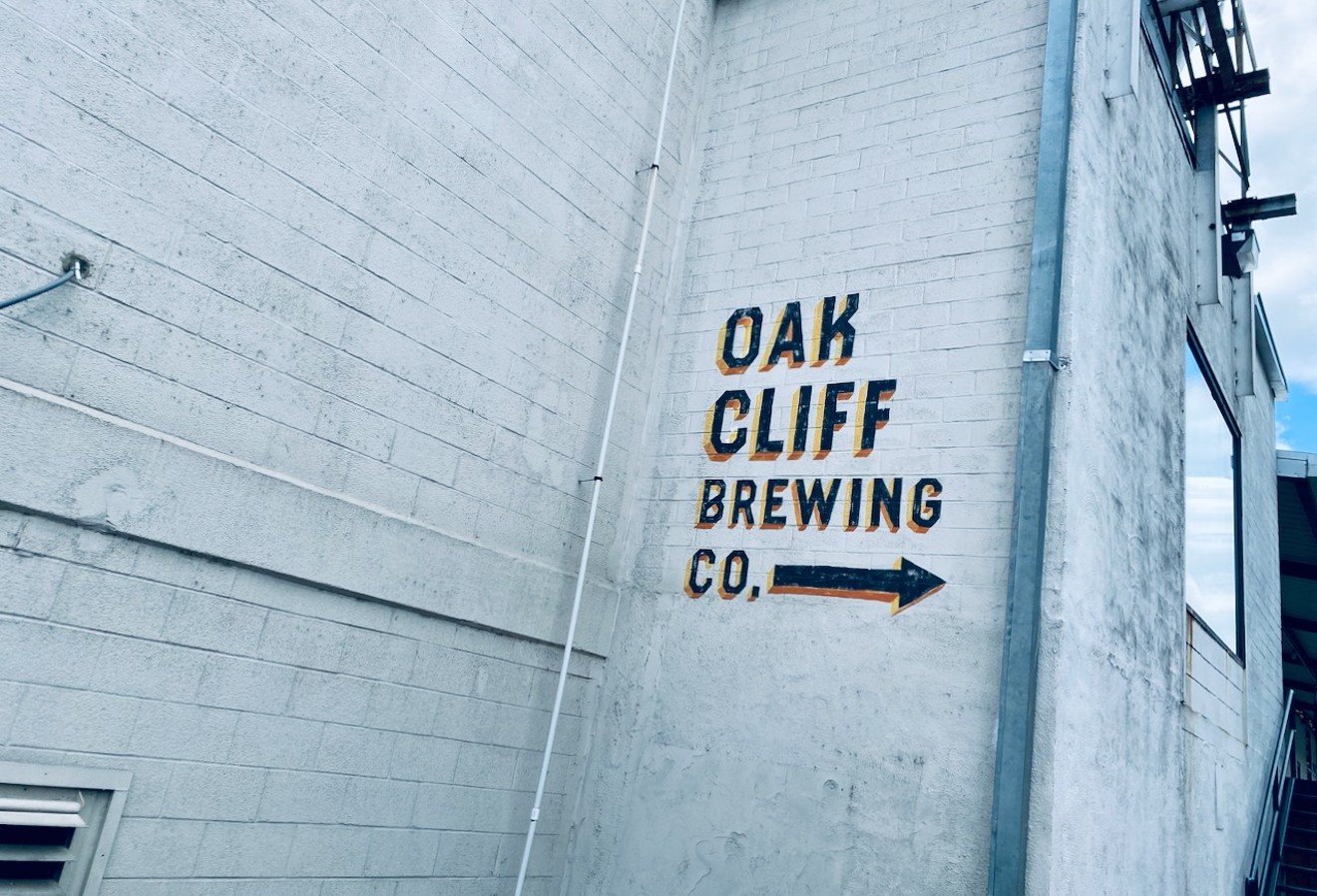 Around the corner you'll find not only beer, but good tacos, just like mom used to make. Lauren Drewes Daniels
So, who needs a beer? One silver lining of Gov. Abbott’s "I'm so over this mask thing" announcement is that taprooms can now open. And while some local breweries applied for a food and beverage permit allowing them to operate as a restaurant over the past years, others have been shuttered for almost a year now. So, they, like Peticolas Brewing Co, are dusting off the divan for guests once again. Most taprooms in North Texas are still adhering to social distancing and mask protocols.

Community Beer Company gets gold stars all over their chart for helping out a lot of local homeowners who had busted pipes and no water after the winter storm. After Hurricane Harvey hit Houston they created non-profit, The Greater Good, with the intent of helping communities, specifically low-income and elderly homeowners, after crisis hit. Needless to say, they've been busy.

One of many instances of people they've helped include Amy Sewell in Fort Worth. She said they came out to her 92-year-old mother’s house, shut off the water that was spilling into the backyard, repaired the pipes and got water running in the house again. After they were done there, Sewell told them about another neighbor that needed help and they were able to fix their water lines also. A lot of their work is word-of-mouth and anyone can contact them for help. If you'd like to help, Community is looking for volunteers who can offer repairs (both light and complex) or can help with muck-outs. Cheers, Community!

Did you know that March 6 is National Oreo Cookie Day? Sho’nuff. Lakewood Brewing Co. double stuffed their Temptress Milk Stout with the chocolate cream cookies, which drops in the taproom and to-go Friday, Mar 5, at 11 a.m.

Ridin’ with Pasos: The Original Oak Cliff from 1889 is a cycling and fundraising event on Mar. 20 that supports the Pasos Scholarship Fund. Manhattan Project Beer Co. serves as home base for the light 10-mile bike ride along the original Oak Cliff acres that was incorporated as a city back in 1889. The cost is $30 per person and includes a shirt, beer and tacos. The deadline to register is this weekend, so no waffling. And you don’t have to have a bike, or even have a bike; you can always just go hang-out, eat and drink, satisfied knowing you helped towards their next $1,000 scholarship.

We’d previously reported folks in Louisiana were worried crawfish might not have survived the mid-February deep freeze. Well, last week the critters crawled out of the mud as survivors. Bless their little pincher hearts. Must have been wicked down there in the swamp mud. To that, next weekend, March 13, Pegasus City Brewery is hosting a crawfish boil with Geaux Kitchen at their brewery in the Design District at 2222 Vantage Street.

Pegasus City also recently extended their hours at their historic art deco taproom on the ground floor of the Dallas Power and Light Building, which they remodeled during the pandemic.

This is fun: Kiestwood Iced Coffee, a small-batch, flash-brewed iced coffee made at Peaberry Coffee in Oak Cliff, has found a second home nestled in the sudsy hearth of Celestial Beerworks. So, one weekdays from 7 a.m. to 2 p.m. you can caffeinate, then roll into beer mode without even leaving your seat. In beer news, Celestial just bottled a 14% coconut macaroon bomb, which is an imperial stout that was barrel-aged for 14-months along with 12 pounds of toasted coconut and a few pounds of vanilla beans. The 250 bottles are on sale now.

On Feb. 28 Vector Brewing celebrated the one-year anniversary of the first beer they ever brewed. Yet they’ve never been able to even open their taproom to full capacity. Bummer. And they’re still holding out. From their Facebook page, “Until more of us are protected from the pandemic at large, we must physically protect ourselves on a smaller scale” and will continue to operate as they have been with protocols in place. But, you can still get down with Betty, a beer named after Rose Nylund from "The Golden Girls." It’s a 4.1% raspberry rice lager, available in the taproom and to-go.

Braindead Brewing is celebrating it's sixth birthday Saturday, Mar. 7, with a dance battle starting at 3 p.m., which includes a $100 cash prize. The sounds in your ears will be courtesy of DJ Led J.

Or you know what you could do? You could go try the new taco truck at Oak Cliff Brewing Company. Tacos La Gloria has a quesabirria de res, which is a taco-quesadilla hybrid served with a cup of rich “chile-tinged consomé, or beef broth.” More importantly, the tortillas are handmade. They’re permanently parked adjacent to Oak Cliff Brewing’s big outdoor courtyard.
KEEP THE DALLAS OBSERVER FREE... Since we started the Dallas Observer, it has been defined as the free, independent voice of Dallas, and we'd like to keep it that way. With local media under siege, it's more important than ever for us to rally support behind funding our local journalism. You can help by participating in our "I Support" program, allowing us to keep offering readers access to our incisive coverage of local news, food and culture with no paywalls.
Make a one-time donation today for as little as $1.