In a City Saturated by Brunch, Lounge Here's New Sunday Version Is a Winner

The filter applies itself at Lounge Here. Kathryn DeBruler
Dallas and brunch are the types of friends born not out of interest or affection, but out of convenience. Every weekend, tables are filled, Benedicts are eaten and salt-rimmed tumblers are dredged to their bottoms.

There are exceptions, like those restaurants that manage to carve out meaningful spaces in the lives of those who enjoy them. They accomplish this feat by way of the menu, the space or some combination. When successful, the result is not just a meal but a deliciously brief reprieve from the doldrums of daily life — an event to be anticipated and savored. Lounge Here successfully created one such event during its first brunch service Oct. 1, a date that corresponded with its one-year anniversary.

Started by Julie Doyle, singer and manager of The Polyphonic Spree, and local artist Tony Barsotti, Lounge Here occupies a piece of Garland Road in East Dallas that is quietly but quickly transforming from a nondescript strip mall to a cluster of businesses, such as Bucks Burnett's 14 Records, that ink cool.

Once inside, that cool factor becomes an oil slick of '70s swank. With lights set low, candlelight illuminates vinyl-wrapped booth seats, velvet chairs and a photo mural of Marfa. The look tempers a late midcentury airport lounge with a Palm Springs vacation home, and the overall effect is both retro and exceedingly soothing, akin to watching an episode of Bewitched while on benzodiazepines.

Equally bewitching is chef Megan Foley's brunch menu, which was crafted with an eye toward refined Southern cuisine. That translates to starters like smoked bacon deviled eggs and tasso ham pimento cheese ($8), and mains like shrimp and Emmental grits with tasso gravy ($19) and a chicken-fried rib-eye with duck fat gravy ($22).

Lighter options include a goat cheese and arugula egg white frittata ($13) and a veggie burger ($12). Lounge Here's meat burger ($14) is also an option, and a popular one at that. The house-cured salmon croissant ($14) provided a nice variation on the classic lox bagel, with the croissant's crisp, buttery folds affording even more richness on top of generously layered smoked salmon and dill cream cheese. Capers and slices of fresh tomato and red onion cut the richness and afforded a bit of crunch. 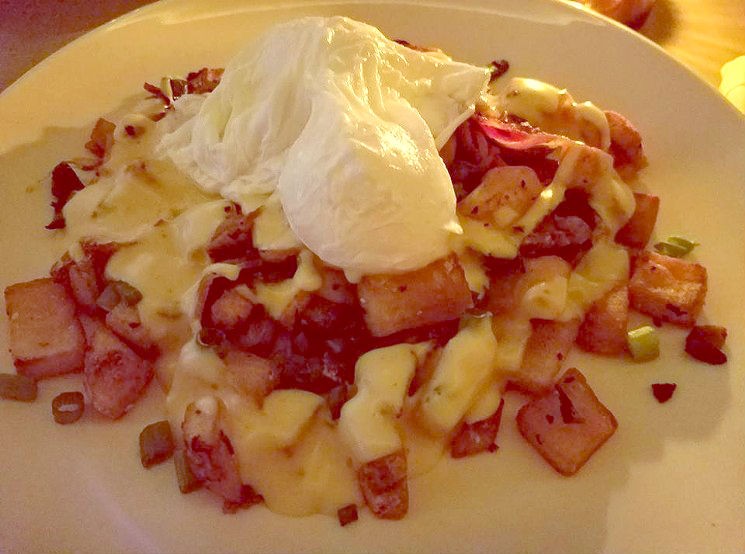 Downside to mood lighting: It is difficult to determine the level of attractiveness of both Tinder dates and cheesy potatoes.
Kathryn DeBruler
And sure, the salmon croissant was solid. But was it potatoes covered in a six-cheese sauce masquerading as a five-cheese sauce? No, it wasn't. And when life gives you potatoes covered in a single-cheese cheese sauce, you eat them, but when life gives you a multicheese cheese sauce? You order your digestive tract to get in formation because you're about to embrace your dairy-based destiny.

Deep-fried nuggets of starch commingled in what was described on the menu as a five-cheese sauce. We learned that the sauce was, in fact, composed of white and yellow cheddar, blue, Emmenthal, Swiss and Parmesan cheeses. Only if you count both cheddars as one — which you should not — can you consider this a five-cheese sauce.

Cheese math aside, the concoction was a delicately stinky swirl of creamy, nutty, savory goodness, bathing the golden potatoes in a sauce that seemed to be an organic extension of the tubers themselves. Such an elemental combination — cheese and potatoes — but Lounge Here took this combination to new heights with the help of interesting cheese, smoky bacon pieces, poached eggs and little bits of verdant peppers.

The cocktail menu — e.g. brunch dranks — offers bloody marys and mimosas alongside a few less-familiar options, such as the Corpse Reviver #2, a bracing little cocktail of dry gin, orange liqueur, lemon and absinthe ($10).

You will likely drive past many brunch restaurants on your way to Lounge Here, places that roll out their red beer carpets. The key is to bypass the places that think of brunch as de riguer and to make your way to places like Lounge Here, where you get more than a plateful of food and a belly full of alcohol; you get candles and soft bass music and five six-cheese sauce whisked to perfection. You get a brunch experience.