And while we really pride ourselves on a robust love of all beers every day, this is simply an excuse to highlight some local ones, to which we are certainly partial. So, as part of our monthly-ish beer round-up, the following are some updates from local breweries.

Side huddle: In the beginning of the pandemic, as with many local businesses there was a big focus on supporting breweries. Eight months has made all this seem like a new normal, but we shouldn’t sleep on how important it is to continue to buy from local breweries. Maybe buy a little more. 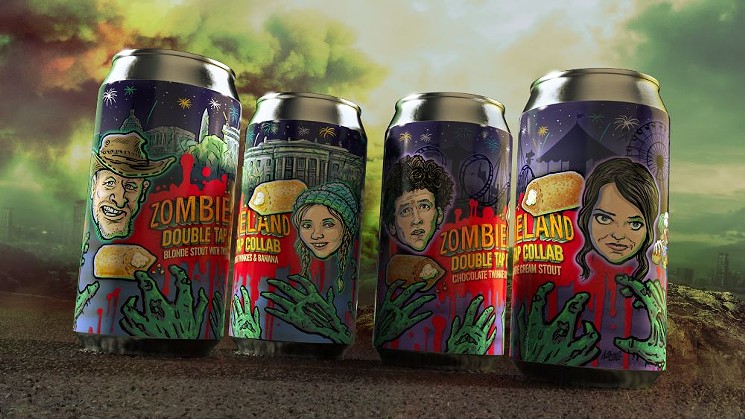 Lakewood Brewing partnered with Intrinsic Smokehouse and Brewery (509 W. State St. in Garland) to make two Zombieland-inspired Twinkie beers. In case you're not part of the cult, let's get you up to speed. First, yes, the Zombieland movies starring Woody Harrelson have a serious cult-like following. Second, Harrelson's character, Tallahassee, is obsessed with Twinkies.

For its part, Lakewood infused original Twinkies into an 11.2% blonde stout brewed with banana and coffee. Intrinsic went with the chocolate Twinkie for a 10% cream stout. Local artist Brad Albright provided the artwork for the cans and a special 3D poster. Check their social media pages for information about a contest on how to win an autographed poster.

The Zombieland Double Tap beers are only available at each of the breweries, starting at 11 a.m. Friday, Oct. 30,  They will have prints and 3-D glasses for the first 100 guests at each location.


Community is offering 25% off all core beers now through Election Day if you bring in your “I Voted” sticker. Speaking of voting and America, who could use a cookie with their beer? Nov. 12, Community is releasing a Snicker Doodle Ale made with heirloom English Marris Otter malted barley, freshly pureed vanilla beans and whole cinnamon sticks because they don't do anything halfway. It's an all-day beer (5.2% ABV). Get this one while you can, because once it's gone, it's gone, and I hate it when good beer just ghosts us.


Our favorite brewer has revived Wintervention, a 10% ABV full-bodied ale spiced with nutmeg, cinnamon, allspice and ginger. All the spices for this beer were sourced from local spice peddler Pendery’s World of Chiles and Spices. How fun is that? Now you're supporting two local business with each sip.

509 N. Bishop Ave. (Bishop Arts District)
This North Oak Cliff spot has a new Pecan Pie Cider, made with Texas pecans. You can use the website to find all the places you can pick this up.

Guess who just completed their second spin around the sun? Celestial also recently released a barrel-aged imperial stout called Mean Motion, of which there are only about 200 remaining at the brewery. It's not online though, so you'll have to hustle over. The layers of flavor here make it worth a special trip; it's brewed with espresso and vanilla beans and a blend of Weller bourbon-aged stout and a Maker's Mark-aged stout. Bonus, each bottle is dipped in a sparkly wax, a la Maker’s Mark.

3 Nations is getting in the spirit of things with a small batch Pumpkin Spice Brown Ale, which has a "hint of pumpkin spice latte" and a 6.1% ABV. They also have a Devout Mexican Imperial milk stout that has notes of Mexican chocolate and coffee.

Río Fresco recently released a holiday-inspired, cranberry-ginger seltzer that will be sold at retailers across North Texas soon.

If you’re looking for a cornucopia of flavors to try, Bluffview Growler is hosting Boos and Brews Saturday with beer and wine specials along with a lot of seasonal flavors from local breweries.
KEEP THE DALLAS OBSERVER FREE... Since we started the Dallas Observer, it has been defined as the free, independent voice of Dallas, and we'd like to keep it that way. With local media under siege, it's more important than ever for us to rally support behind funding our local journalism. You can help by participating in our "I Support" program, allowing us to keep offering readers access to our incisive coverage of local news, food and culture with no paywalls.
Make a one-time donation today for as little as $1.