Sure to make dad smile! The Crazy Crab Pot
What do you give the person who already has everything, namely you? Scratch-offs are always fun, but Dad already hit the lotto once when he was gifted you. Alas, you can’t show up empty handed.

What Dad really wants is time with you! And maybe between y'all is the tray of crab legs in that photo above.

The Crazy Crab Pot is a locally owned seafood delivery business and will be making deliveries on Father’s Day in the northern reaches of the viewing area, including Frisco, Allen, Plano, McKinney and North Dallas. They serve giant pans of seafood, like the jumbo Alaskan king pan that comes with three jumbo legs, sausage, shrimp and potatoes for $90. They also have a loaded pasta, shrimp nachos and etouffee. Find their menu and delivery details on their Facebook page or call 469-912-8797.

Big spenders can buy Dad a brewery in Fort Worth.

With more than 70 breweries around North Texas, picking out a few good local beers is hard. There a so many great options.

If Dad is a Jack and Coke-beer kind of beer guy, grab a crowler of Tennessee Temptress at Lakewood Brewing Co. They aged their Temptress in Jack Daniel's barrels for six months, and then it's “refermented on over 500 pounds of sweet cherry purée to bring out a little sweetness and round out the edges.” Just like Dad, right?

Martin House Brewery Co. recently released a new beer called Slice of Heaven. This heavyweight slinger (9.2%) is a calvados barrel-aged apple pie sour. What’s that? From their site: "Calvados is apple brandy. Apple pie is delicious. And so are sour beers.” It's on their distribution route, so look for it in stores, or use Untapped to preorder for pickup.

Oak Cliff Brewing Co. recently unleashed a Cherry-Lime Paleta Weiss. It's like going through Braum's or to Sonic, but in an adult way. Because you're both totally adults now.

Or there’s always Peticolas' “Not With that Attitude” to poke the ol’ bear a little.

For Whiskey Drinkers
If you can find it (pray you don’t), Malort is always an awful option. But, really we just love their copywriters who produce lines like, “Malort, tonight’s the night you fight Dad.”

(We all have our paths to travel, and there’s no judgment here on what you need to get your dad.) 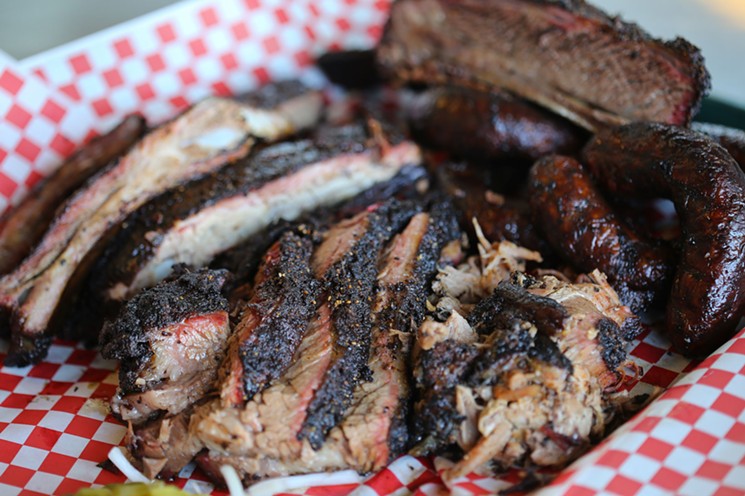 Winners BBQ in Plano is known for a bonkers meat-stacked baked potato. But, get the Party Time platter, which is a full slab of ribs, two pounds of brisket and two pounds of any other choice of meat and four large sides. They deliver through Grubhub, DoorDash and UberEats.

There’s also a Winners BBQ in Cedar Hill, which we’ve talked about, but is owned by another group. (Still great!)

Pecan Lodge has family-style meals available for takeout and can be delivered through DoorDash and UberEats. No lines or parking! At one point they tried delivery, but hated it because of quality control issues. The fact that they're doing it again means they figured out how to do it right. That's fantastic news for all of us.
KEEP THE DALLAS OBSERVER FREE... Since we started the Dallas Observer, it has been defined as the free, independent voice of Dallas, and we'd like to keep it that way. With local media under siege, it's more important than ever for us to rally support behind funding our local journalism. You can help by participating in our "I Support" program, allowing us to keep offering readers access to our incisive coverage of local news, food and culture with no paywalls.
Make a one-time donation today for as little as $1.