The Flip Side at Jettison is a killer introduction to the world of sherry cocktails. Alison McLean
Dallas, it's time to let go of the Moscow mule. We get it; it's light and refreshing with a gingery bite, and it's on damn near every cocktail menu in the city. But as the Dallas drink scene evolves, it's time our palates did, too. Here are five cocktails you should be sipping this weekend:

The Flip Side at Jettison
This tiny cocktail den in Sylvan Thirty is one of the best cocktail bars in the city right now, with an inventive menu and modern romantic ambiance. They're also particularly adept at sherry cocktails. If you're looking to dip your toes into sherry, the fortified wine showing up on cocktail lists all over the U.S. right now, try Jettison's Flip Side, made with Cardamaro Amaro, East India Solera Sherry, bitters, egg and grated cardamom.

This pink cocktail is made using a syrup of a Peruvian purple drink. Raise a glass.
Susie Oszustowicz
The Have You Seen My Keys? at Rapscallion
Tiki is hot right now. Unfortunately, Dallas' one and only dedicated "tiki bar" is so not. Luckily, a number of local bars — particularly Rapscallion and Small Brewpub — are upping their tiki cocktail game with fun, inventive drinks that pay homage to tiki while offering their own unique takes. One of Rapscallion's best tiki cocktails is one that's just plain fun to order (and drink): the Have You Seen My Keys?, made with rhum, pineapple juice, coconut, orange acid, Angostura bitters and a syrup made from Chicho Morada, a traditional Peruvian dark purple drink made from purple corn, pineapple husks and spices like cinnamon and cloves.

When at Hide, try their gin and tonic, made in a shaker pressurized with carbon dioxide and served in a champagne flute.
Melissa Hennings
The gin and tonic at Hide
This new Deep Ellum cocktail laboratory seems gimmicky, using technology like centrifuges and roto-vaporizers to create what they call "cocktails clarified," but these drinks have proven to be well worth sampling. Try their fun take on the gin and tonic, made in a special clear shaker that's sealed and pressurized with carbon dioxide to create a super-aerated, ice-cold and uber tasty gin and tonic served in a Champagne flute. 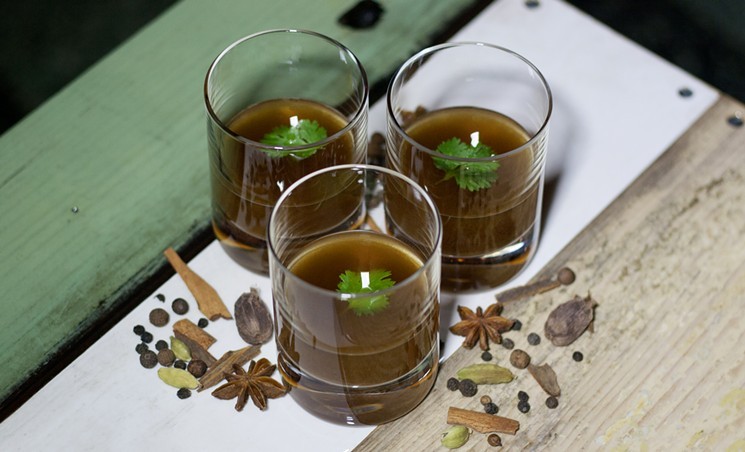 This shot of pho has an added twist: vodka and sherry.
Tony Krash
The Pho-King Champ at Midnight Rambler
We love shots as much as the next lush, but we really love an aromatic bowl of Vietnamese pho. Downtown Dallas cocktail heavy-hitter Midnight Rambler has combined these two unlikely allies to create the Pho-King Champ, an $8 shot made with Absolut Elyx wheat vodka, Oloroso Sherry, aromatized beef stock and cilantro.

KEEP THE DALLAS OBSERVER FREE... Since we started the Dallas Observer, it has been defined as the free, independent voice of Dallas, and we'd like to keep it that way. With local media under siege, it's more important than ever for us to rally support behind funding our local journalism. You can help by participating in our "I Support" program, allowing us to keep offering readers access to our incisive coverage of local news, food and culture with no paywalls.
Make a one-time donation today for as little as $1.
Dallas Observer Staff