Fruit Stands Are Essential, and That's Why North Oak Cliff Has a New One

Now, anyone who passes by the spot might giggle (or cry) at the inventive, pop-culture papier-mâché creations that Segreto comes up with at ABC Party HQ. A recent example is the bright red and green COVID-19 molecule piñatas that dangle in the wind begging to get beaten with a bat. Another is the Donald Trump piñata with a trademark red tie and a blondish-orange wave of hair. Is it filled with bad decisions and regret? No one can say for sure just yet, but probably not regret.

But, when the COVID-19 pandemic hit and the county ordered all non-essential business to shut down, Fuente was forced to close his entire party supply store for 10 weeks. Obviously, piñatas aren't essential — unless you earn your living making and selling them.

Fuente says he has entire families working at his business, and the stress of that had a huge effect on him. He wanted to make sure he would never again be forced to shut down because his business isn't essential, so he had a trailer retrofitted to be a fruit stand.

Selling fruit and groceries is twofold: produce is readily and easily accessible, curbside basically, for the local community, and the business is essential.

It seems to be a healthy and clever solution.

Micho’s Oak Cliff Central Market is a simple trailer topped with a turquoise canopy and stuffed with boxes of fruit. 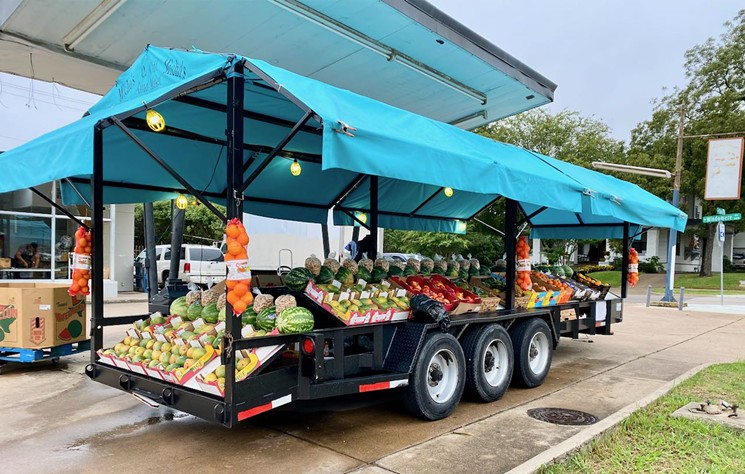 The essential-deeming fruit stand
Lauren Drewes Daniels
The stand opened five weeks ago, and Segreto says they’ve been staying busy. The variety of fruits and vegetables will rotate seasonally, and Fuente would like to incorporate local produce, if possible. Right now, at the end of the local farmers' season, Fuente's having to go farther south, such as the Rio Grande Valley, he says.

"Next spring, we will bring in local and as much organic as possible," he says.

Watermelons with dark red meat and bright mangos are the best sellers for now.

Micho's is cash-only at the stand, but customers can go inside ABC Party HQ if they want to use a credit or debit card.

“I need honey,” Fuente said recently looking to bring in products from the neighborhood.

So, if you know some bees with some extra honey in the North Oak Cliff area, have them buzz by.

Micho's Oak Cliff Central Market, 1414 W. Davis St. (North Oak Cliff). Open 10 a.m. to 6 p.m. Monday through Saturday; 10 a.m. to 4 p.m. Sunday.
KEEP THE DALLAS OBSERVER FREE... Since we started the Dallas Observer, it has been defined as the free, independent voice of Dallas, and we'd like to keep it that way. With local media under siege, it's more important than ever for us to rally support behind funding our local journalism. You can help by participating in our "I Support" program, allowing us to keep offering readers access to our incisive coverage of local news, food and culture with no paywalls.
Make a one-time donation today for as little as $1.