Proper Wing has about 20 different combinations of sauces and rubs. Plus loaded fries that you can order with chicken atop. Angie Quebedeaux
Chef Jon Thompson recently launched a new restaurant focused on one of his favorite foods: chicken wings. After perfecting his culinary skills working for Michelin-star chefs Bradley Ogden and Gerard Pangaud, Thompson became the executive chef of Samar by Stephan Pyles, which focused on Spanish, Turkish and Indian cuisine and was was nominated for best new restaurant in the nation by the James Beard Foundation.

Thompson also partnered with Pyles at Stampede 66, a tribute to Texas fare with a menu that included award-winning honey-fried chicken. Stampede 66 was included in Esquire magazine’s best new restaurant list. He then went to work for José Andrés, the world-renown Michelin-starred chef, as the head chef of Zaytinya Frisco.

Most recently, Thomson lent his talents to Miami-based Yardbird Southern Table and Bar and brought their James Beard Award-nominated concept to Downtown Dallas. 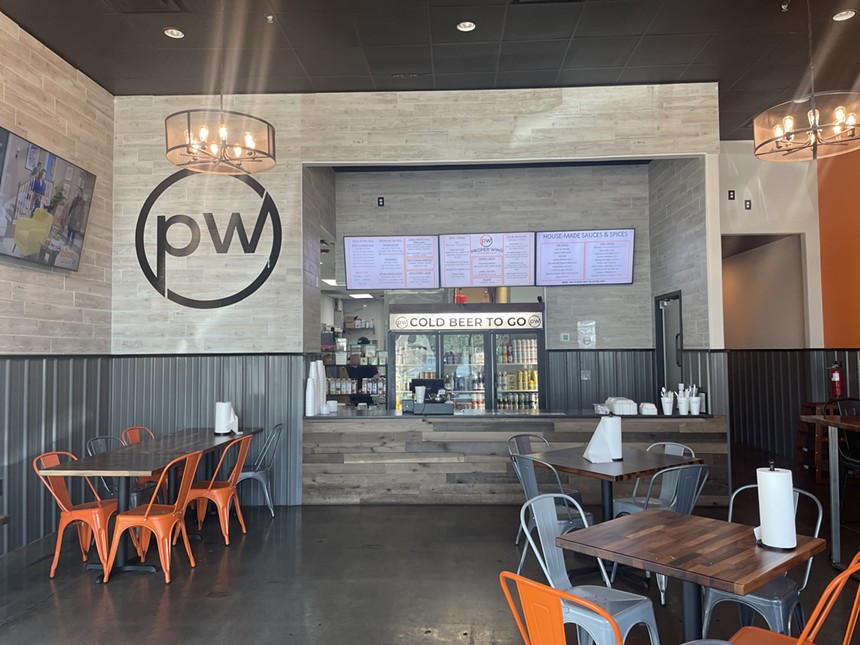 Proper Wing opened earlier this year and has a small dining room but is set up for swift takeout.
Angie Quebedeaux
So, with all this culinary street cred under his belt, why in the world would he open a place in a strip mall in Murphy, Texas, focused primarily on chicken wings? The short answer is because chicken wings are one of his all-time favorite foods. He was once refused service at two all-you-can-eat wing places in the same night. Also, he's able to use his experience with multiple global cuisines to dabble in unique flavors combinations.

Proper Wing opened in early 2022 and has quickly built a loyal following thanks to this willingness to experiment. They are a counter-service restaurant with about 10 tables inside. They do have a drive-thru window, but since they cook everything to order, it’s better to call ahead before heading over.

All sauces and spices are made in-house, and they're serving wings (bone-in and boneless; flats and drumsticks) tenders, plant-based “Beyond” tenders and chicken sandwiches that are a little better and different from what you might find at traditional chicken wing joints.

While they do offer some traditional flavor options like Buffalo, garlic Parmesan and lemon pepper, it's highly recommended to venture out of your comfort zone and try flavors like the Peruvian Rotisserie Spice, Gochujang BBQ and Nashville Hot Butter, which we tried on our visit and were standouts. The wings are moist and tender, not overcooked and dried-out.

Aside from the usual suspects, dipping sauce options include Proper Dip (which is their house comeback sauce) and our favorite the green Gucci, which is a creamy Peruvian sauce with garlic, cilantro, green chile and lime.

As a side, we ordered their loaded house fries topped with a beer cheddar sauce made with Avery Brewing White Rascal, bacon and jalapeños. These could give the loaded fries at Snuffer’s a run for their money.

Other side options include a watermelon-mint salad, seasoned fries (with any of their spice mixes), Belgian-style waffle and veggie sticks.

Thompson will rotate wing flavors just as he’ll rotate their selection of beers. They’re not doing draft because they want to make everything easy for takeout, so all their beer is in bottles or cans. While they do have a few domestic options, their focus is on local craft beer and hard seltzers.

Proper Wings, 305 FM 544, 11 a.m. to 9 p.m. Sunday - Thursday. 11 a.m. to 10 p.m. Friday and Saturday.
KEEP THE DALLAS OBSERVER FREE... Since we started the Dallas Observer, it has been defined as the free, independent voice of Dallas, and we'd like to keep it that way. With local media under siege, it's more important than ever for us to rally support behind funding our local journalism. You can help by participating in our "I Support" program, allowing us to keep offering readers access to our incisive coverage of local news, food and culture with no paywalls.
Make a one-time donation today for as little as $1.