Lessons Our Food Critic Learned on Vacation in Mexico City

Pulpo enamorado, a traditional Pacific Coast dish, as interpreted by Restaurante Nicos in Mexico City. Brian Reinhart
OK: That title is a bait and switch. You’re probably expecting me to talk about tacos or mole or some other delicious Mexican food. But this is a story about coronavirus.

I recently spent a week in Mexico City. And the biggest cultural difference — more than language, more than street food, more than daily afternoon thunderstorms — was that everyone in Mexico is trying to protect each other from getting sick.

If there’s anyone in Mexico City who thinks that taking steps to stop a disease is a “personal choice,” I didn’t meet them. Almost everyone I saw in the city was masked up — even outside, walking down the street. Even market sellers respected our personal space.


Now, not every safety measure in Mexico made sense. At our hotel, all museums and most restaurants, we had to walk across a little sanitized doormat to remove the germs from the soles of our shoes. Coronavirus is not spread on shoes. Temperature checks aren’t always valuable either, since many infected people do not have symptoms.

But taking an extra, unneeded safety measure only costs money. Ignoring the most basic safety advice can cost lives.

When I returned to Texas, I had an abrupt awakening to many Americans’ attitudes: that this is somehow a crisis of human rights. Right now, Texas businesses and Texas’ governor are debating whether excluding customers who choose to ignore public health guidelines counts as discrimination and how far business’ property rights go. 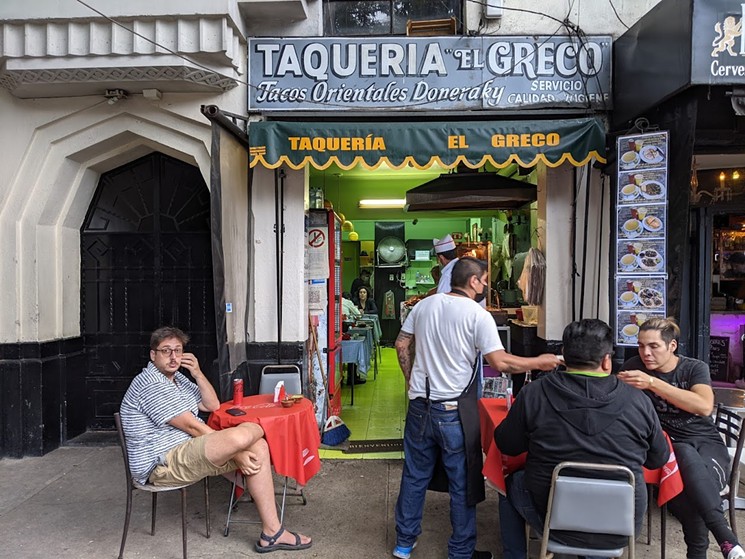 One of our critic's favorite taco spots in Mexico City sells tacos with a Middle Eastern influence.
Brian Reinhart
Why is our messaging so focused on the individual, and on our individual chances of getting sick? In Mexico City, the message was clear: You’re protecting yourself, but you’re responsible for everyone else, too. That’s why restaurants were still politely asking us to use hand sanitizer and provide our names; one outdoor restaurant had even set up new hand-washing stations at the front entrance, complete with running water.

As a tourist, especially, I had to do the right thing. I’d traveled to Mexico from a country with a significantly worse outbreak of the virus, for personal pleasure. It was an obligation to make sure that locals were safe from me. Waitstaff, transit passengers and fellow visitors were trusting me to help protect them.

I had to keep that trust. Even if some security measures were more feel-good than real help, they were symbols, representing a culture in which everyone takes care of each other.

Back here in the United States, there’s a lot less taking care. Partly, that’s because our vaccination rates are higher (54% in Dallas County compared to 21% in Mexico, though Mexico City’s rate is likely much higher than in rural areas). Partly, it's because Mexico has experience dealing with pandemics; in 2009, faced with the swine flu, many states and cities shut down their schools, and the government distributed surgical face masks.

It’s not that simple. My job involves going to around 20 restaurants a month, talking to staff and leaving DNA samples on all sorts of dishware. I have to think about protecting the people who feed me, bring me drinks, clean my table and take everything away. I have to think about the family and coworkers I meet after those meals, too.

Yes, I’m vaccinated, and if I get coronavirus, the most likely scenario is that I’d be sick for a few days and move on. But that shot in the arm wasn’t just for me. It’s for everyone around me, too.

It’s easy to forget that in a culture which believes the right of an individual to shirk his or her obligations beats the right of a collective group to live healthy lives. But in Mexico City, where vigilance is still high, reminders are everywhere that we’re all in this together, and we all need to protect each other.

That’s true in Dallas, too. The outbreak here is worse. Unfortunately, we need to start acting like it.
KEEP THE DALLAS OBSERVER FREE... Since we started the Dallas Observer, it has been defined as the free, independent voice of Dallas, and we'd like to keep it that way. With local media under siege, it's more important than ever for us to rally support behind funding our local journalism. You can help by participating in our "I Support" program, allowing us to keep offering readers access to our incisive coverage of local news, food and culture with no paywalls.
Make a one-time donation today for as little as $1.