Chase Stout, the executive chef at IdleRye in Deep Ellum. Taylor Adams
When a young person gets a leadership job that typically goes to someone at least a decade older, it’s quite possible that he or she might think it’s fine to run the ship with a less-than-generous attitude.

But there’s at least one 23-year-old who doesn’t fit that mold. For Chase Stout, the executive chef’s role at IdleRye in Deep Ellum is a chance to lead and nurture others entering the industry.

“I get a lot of joy out of teaching people things, then seeing smiles on people’s faces when they eat the food,” Stout says. “But I have to have the right people behind me to make that happen.”

Stout’s first gig in the restaurant industry was working front-of-house in an Applebee’s while he was still in high school, a job his mom got him through a mutual friend.

“I pushed myself to back-of-house,” he says.

Not long afterward, he was part of a Texas Land and Cattle opening in Fairview.

After high school, he saw an ad on TV for Le Cordon Bleu in Dallas and made a quick decision to go.

After that, his mom used another connection for him, this one at Wolfgang Puck, where he met his most influential mentor so far.

“Ray Skradzinski has taught me more than I could ever imagine about keeping up a restaurant,” he says. “Everybody who has worked for him praises him.”

Stout’s not the only one at IdleRye with Wolfgang Puck ties — a number of staff members come with similar experiences from the company. It shows in the quality of the food from the kitchen and the drinks from the bar.

When Stout was helping Skradzinksi and Bruce Wills (also of IdleRye) open the Table in Carrollton, they gave him the chance to take his first executive chef job (then at the ripe age of 22) at their new Deep Ellum spot. IdleRye has been open on Elm Street and Malcolm X Boulevard for a little over a year, with a menu that ranges from battered shrimp to pierogies to a rather fantastic burger. 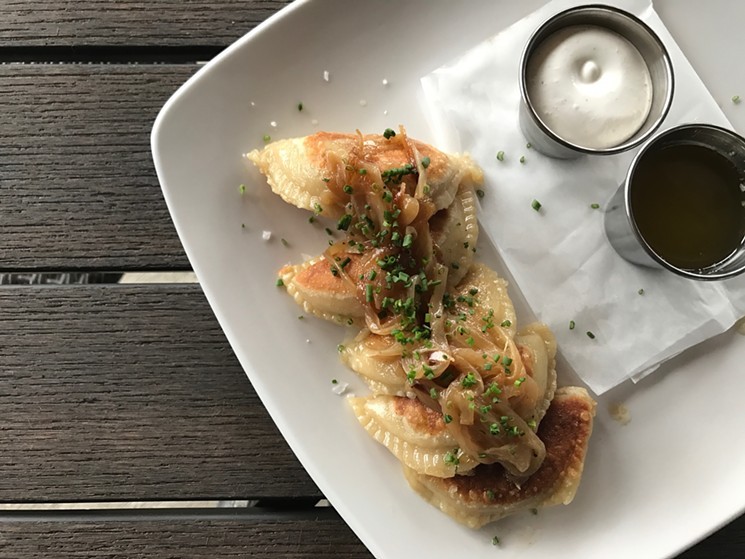 IdleRye's pierogies are one of the restaurant's most popular dishes.
Beth Rankin
Skradzinski had set up the menu and kitchen staff before handing everything to Stout.

“It was hard taking over,” Stout says. “The people who came to work with that chef followed him. ... I lost all my people for prep.

“That was a rough month or two,” of working long hours and covering more roles, he says.

Stout inherited the menu — but says he still has plenty of opportunities to be creative — and slowly got the team to where he likes it.

“We’re making it work now,” he says. “It’s always good when you have a team you can trust.”

His normal workday starts between 9 and 11 a.m. and has him leaving the restaurant between 11 p.m. and midnight. He leads the kitchen and stays in the back-of-house area that’s open to the restaurant.

When it’s not service time, he keeps up standards and thinks about what’s next.

“We’re making it work now. It’s always good when you have a team you can trust.” – Chase Stout, executive chef at IdleRye


“I might be in the office or staring in the walk-in, thinking of what we can make out of what’s in front of me,” he says.

You can tell when talking with Stout, who regularly engages with guests, that he likes his job. But the part he loves is being in the kitchen.

“I fell in love as soon as I went to the kitchen,” he says. “Back there, that’s more of a family. You butt heads, you might get tense, but once service is done, you’re sorry, you move back.

“It’s also teaching younger people — there’s an 18-year-old kid back there with little kitchen experience. I get to teach him stuff I learned. We’re all really close.”

Getting close and functioning well as a team can take some extra work when a young person takes the lead.

“I was surprised to be here this fast," Stout says. "A lot of executive chefs I know are a lot older. It is weird to me to have [people on my team] older than me. I think they’re mostly all in their late 20s. It’s all fun and games, you joke around, but then you flip the switch when service starts.”

Stout lives in southern Dallas but has found a nice fit in Deep Ellum, he says. He wants every business to do well, and when he gets a night free, he’s at one of them.

As for IdleRye, “I just what it to continue to grow and get even better,” he says.

Stout has dreams of owning a restaurant but values the ability to learn all the ins and outs of the process while he’s here.

“All that stuff is starting to click,” he says.

He launched an updated menu last week and is working on incorporating his latest love: pasta. The restaurant typically runs out of crawfish ravioli because he makes the pasta fresh and can’t keep up with the demand.

“I also love fried food. I know that’s not always the healthiest,” Strout says. “I guess I don’t always eat the best food.”

At the very least, he can make it.

IdleRye, 2826 Elm St. (Deep Ellum)
KEEP THE DALLAS OBSERVER FREE... Since we started the Dallas Observer, it has been defined as the free, independent voice of Dallas, and we'd like to keep it that way. With local media under siege, it's more important than ever for us to rally support behind funding our local journalism. You can help by participating in our "I Support" program, allowing us to keep offering readers access to our incisive coverage of local news, food and culture with no paywalls.
Make a one-time donation today for as little as $1.