Pop-Up for Momos Turns to Podcasts

Daniel Flores, Leezen Amatya and Thang Duong Courtesy of Momo Shack
Many know Momo Shack Himalayan Dumplings for their frozen momos and pop-ups. But now the Momo Shack team is taking it one step further by creating a podcast, "The Secret Sauce Podcast," to build community, give advice and, most important, share stories.

Momo Shack was started by Minu Amatya, Leezen Amatya, Daniel Flores and Thang Duong. They had been tossing around the idea for a podcast since June and launched “The Secret Sauce” in late October.

“The reason why we wanted to start the podcast was to share stories,” Flores says. “Our stories and the people that we want to interview, as well. Everyone has a story and being able to capture that is huge.”

The Secret Sauce Podcast currently has four episodes. The first was recorded during a trip Amatya, Flores and Duong, or the Momo Boyz as they call themselves, took together to unplug. The second episode was with “influencer” Tim Lee, and the third episode was with Chris Phan, founder of 8 Mile Pies.

The most recent episode, released Nov. 19, is the first of a four-part series to dive into what each member of the Momo Shack family is like.

“The intent is to have different people behind the local businesses in Dallas, businesses that we are interested in and want to learn about, and just share their stories to whoever is listening,” Leezen says. 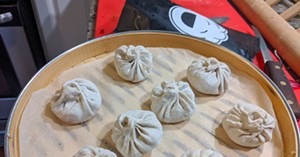 The beloved Napali dumpling pop-up business has had a number of pivots during the pandemic, including offering their goods to go, frozen.
Brian Reinhart
Flores says the initial guests on the podcast are people they know and look up to. The podcast will be broken down into seasons, each revolving around a theme, whether it be people in the food world in Dallas, business owners or other community members. The team is still brainstorming concepts and considering where the podcast will go.

It's uncommon for local food businesses to have a podcast unrelated to their product. However, to this team, the momo itself represents community and is so much more than just a dumpling.

“Momos will always be the foundation of how everything came together,” Leezen says. “The podcast is not necessarily food-related, but it sparked from the food idea. I think it’s always going to be there.”

“The Secret Sauce” podcast is just another way Momo Shack can connect with the people around them. Flores said that although we all like food, knowing the people behind the brand is how to learn about their stories and struggles.

“You saw that with Momo Shack, too,” Flores says. “We started at the Dallas Farmers Market and momos as the product. But we saw that a lot of people connected with our story of being four immigrants from three different parts of the world.”

“The Secret Sauce Podcast” is available on Spotify, Apple Podcasts and Momo Shack's website.
KEEP THE DALLAS OBSERVER FREE... Since we started the Dallas Observer, it has been defined as the free, independent voice of Dallas, and we'd like to keep it that way. With local media under siege, it's more important than ever for us to rally support behind funding our local journalism. You can help by participating in our "I Support" program, allowing us to keep offering readers access to our incisive coverage of local news, food and culture with no paywalls.
Make a one-time donation today for as little as $1.