Where to Get Your Non-Traditional Thanksgiving Dinner Fix in Dallas

Beijing duck for Thanksgiving? Alison McLean
Thanksgiving is creeping around the corner. After a year-long rest, it’s time for the turkey stuffing, potato mashing and cornbread baking to begin again. But if you’re not too keen on the usual menu, there’s no shortage of options to experience in Dallas.

If you just can't handle another gobble gobble, here are some great options for restaurants that are open and not serving a traditional meal. We'll continue to update this list as we come across more spots.

221 W. Polk St., No. 200, Richardson
This well-established Chinese restaurant in Richardson is notorious not only for its mouth-watering dim sum but also for staying open on Thanksgiving Day for a gratifying (and relatively affordable) dinner feast. Kirin Court sells an almost endless list of Chinese delicacies, ranging from crispy fried pig intestine to sesame oil jellyfish. The Kirin Court menu is divided into 10 sections, featuring Asian delicacies with noodles, duck meat, beef and pork. Of course, you'll probably have to forgo the classic Thanksgiving turkey and pumpkin pie in favor of a more unorthodox meal here. But we don’t think you’ll regret it afterward.

One of Kalachandji’s best features is a gorgeous courtyard, a perfect setting for a healthy vegetarian meal.
Beth Rankin
We’ll bet you’ve never tried Thanksgiving vegan-ified. And in the rare case that you have, the electric Dallas food scene makes it possible to do it again. Kalachandji’s — a vegan buffet-style Indian restaurant in Dallas— has a pretty tempting Thanksgiving buffet menu that has many fans returning year after year. The special menu offers traditional Thanksgiving foods like tofu turkey and candied yams, balanced by non-traditional Indian specialties such as spinach pakora and yellow dal fry. It’s probably not what you’d expect to eat on a typical Thanksgiving Day. But what kind of festival would it be without a little bit of adventure?

2501 N Harwood Street, No. 225
French food and Thanksgiving are two concepts we’ve yet to hear in the same sentence — well, until now. Mercat Bistro is a French restaurant in the heart of downtown Dallas that serves classic French dishes including escargot, quiches, and traditional French meats. Its Nov. 24 spread this year is no less exquisite, weaving French culinary influences into traditional Thanksgiving foods. Onion soup gratinee, roasted venison loin and chocolate crepes are just some of the French delicacies you can enjoy this year from 3 p.m. to 8 p.m. It’s no Turkey-and-mashed-potato meal, but maybe that's a good thing. 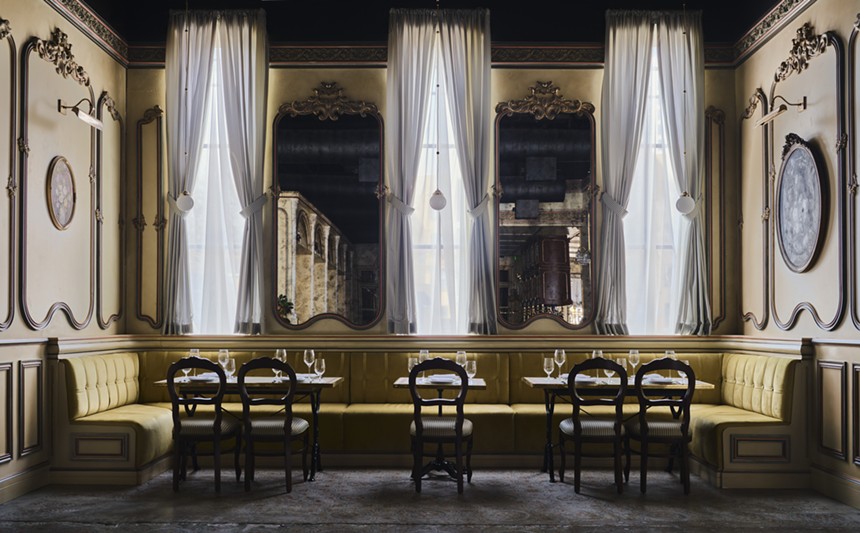 Carbone is open on Thanksgiving with some Italian-inspired Thanksgiving dishes.
Carbone Vino
An upscale Italian-American restaurant in the design district, Carbone is a solid option for Italian food fans who don’t want to miss out on the flavors of Thanksgiving. Thanksgiving Day reservations here open at noon and are available throughout the day until 8 p.m. While you’ll find the traditional glazed turkey as a part of the set holiday menu, traditional plates are balanced out by Carbone’s uniquely Italian specialties. This year, those include spicy vodka pasta, a creamy butternut squash tortellini and tuna calabrese. Prices are slightly more expensive — $195 each. Just prepare your stomach for a full meal. 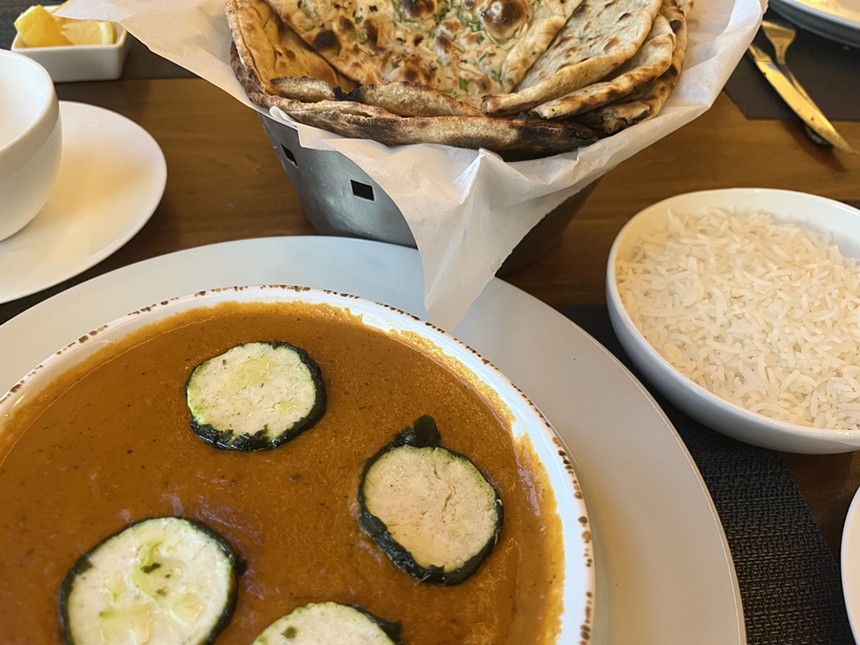 Shaam savera is a good vegetarian option.
Anisha Holla
Sanjeev Kapoor is one of India's most famous chefs. He opened The Yellow Chilli in Plano in 2021 with an aim to fuse traditional Indian foods with more modern recipes and preparation methods. We reported on this spot this summer and loved the shaam savera and bread filled with cheese and dried nuts. The Yellow Chilli is open on Thanksgiving, but you'll want to make reservations soon.

2817 Maple Ave.
This isn't on Thanksgiving, but it's a nontraditional approach nonetheless. And it will likely sell out quickly. On Tuesday, Nov. 22, Uchi Dallas is offering a Thanksgiving omakase menu that will include a charred romaine salad, nigiri, amaebi bisque, bluefin crudo, sashimi, turkey katsu and sides. All of that will be topped off with kabocha Japanese cheesecake. Make reservations on the website (soon). The cost is $275 for two.
KEEP THE DALLAS OBSERVER FREE... Since we started the Dallas Observer, it has been defined as the free, independent voice of Dallas, and we'd like to keep it that way. With local media under siege, it's more important than ever for us to rally support behind funding our local journalism. You can help by participating in our "I Support" program, allowing us to keep offering readers access to our incisive coverage of local news, food and culture with no paywalls.
Make a one-time donation today for as little as $1.