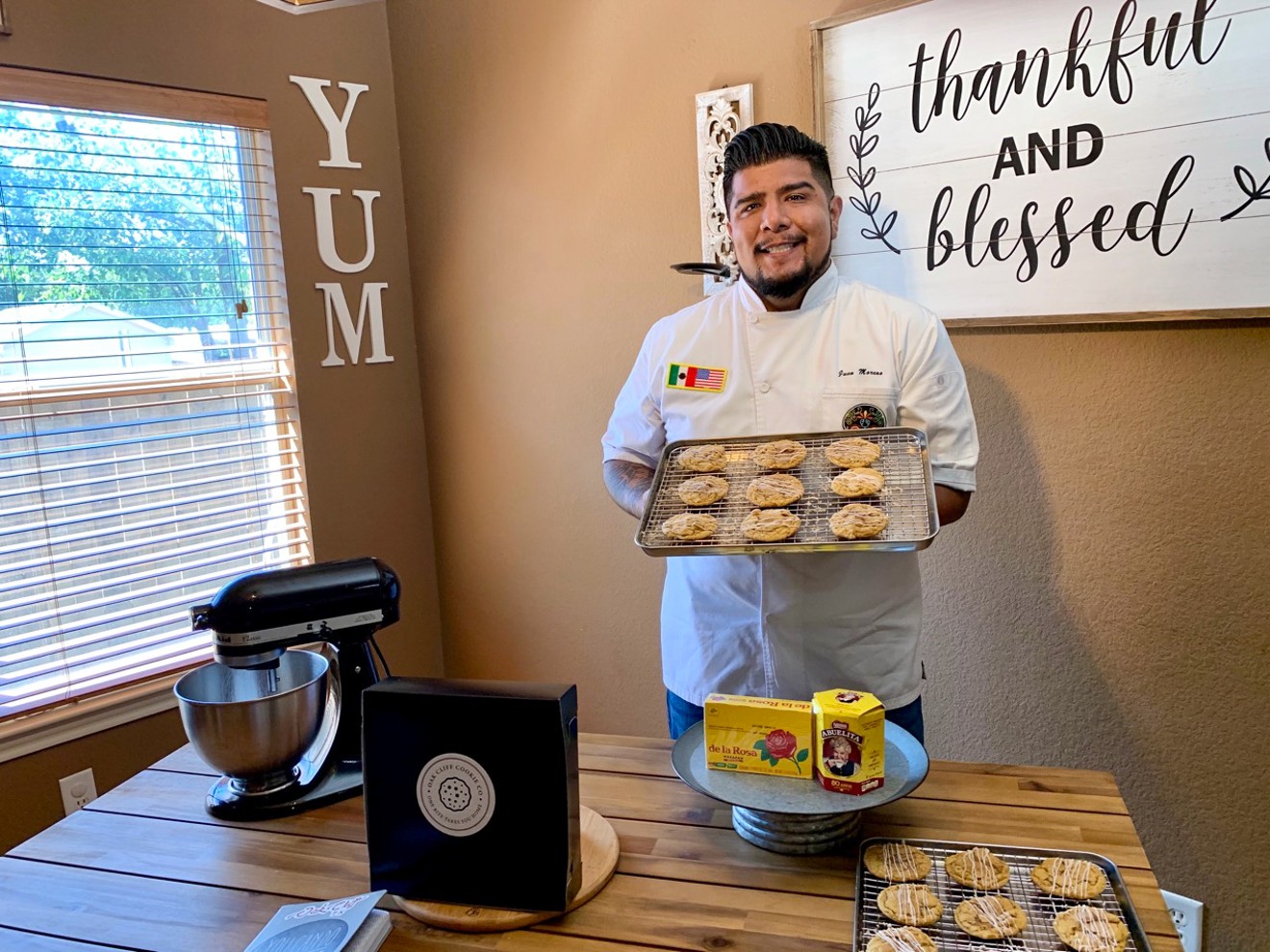 Chef Juan Moreno. Elias Moreno
“One bite takes you home,” promises the slogan of Oak Cliff Cookie Co., a cookie pop-up run out of the home of chef Juan Moreno.

In Moreno’s case, home takes him back to Michoacán, Mexico, and his first experience in the kitchen at 7 years old in his grandfather’s restaurant. It was there he fell in love with food and hospitality.

That love has guided Moreno through an extensive culinary career, through a mix of back- and front-of-house work, including time with chef John Tesar and stints with Brookhaven Country Club, the Four Seasons, Omni Hotels & Resorts and, most recently, Front Burner Group Dining’s Mexican Sugar, among others.

But with COVID-19 and the toll it's taken — and continues to take — on the hospitality industry, Moreno and a number of the members of his restaurant family found themselves out of work.

In response, he “started baking cookies to cure the ails of those that were furloughed or unemployed” and “noticed how much joy it brought them and how much it made my day.”

From there, the idea of Oak Cliff Cookie Co. was born.

“It’s about the customer, the customer service," he says. "They come to you, for you, for a reason. They're hungry. They’re sad. It’s your responsibility to address those needs. They're taking a chance on you. It’s a relationship."

With that goal in mind, Moreno began his research and development efforts, baking more than 1,000 cookies with taste testers not only from his restaurant family that inspired the endeavor, but also the school where his wife teaches, the local fire station and the plant where his father works.

“I didn’t want to do another chocolate chip cookie,” Moreno says. “I wanted something that expresses who I am in a cookie. I wanted to tie in my Mexican culture and American culture with my work, my art, my food, the cookies.”

The research and development have so far resulted in five Mexican-flavor inspired flavors. And art they are.

The Abuelita Choc Chip, Moreno’s first creation, is inspired by a Mexican-American favorite.

“Pan dulce is a staple in Mexican culture,” he says. “It doesn't matter if it's 100 degrees or -20 degrees outside; you’ve got pan dulce, and you have to pair it with Abuelita hot chocolate. It’s embedded in our culture. I don't think you can talk to a single Mexican American or Texan that doesn’t know Abuelita chocolate.

“I wanted to do something that I could relate to and that other Mexican Americans can look at and can see themselves.”

Next is the Mazapán, inspired by peanut butter cookies and adapted in honor of one of Moreno’s favorite childhood activities.

“We used to play a game with my cousins,” he says. “We would take the De La Rosa mazapán and try and get it out of the package and maintain its integrity without crushing it.”

Moreno’s ode to his childhood has a peanut butter and vanilla base embedded with mazapán, with mazapán in the topping, as well.

The Fresas Con Crema, Moreno’s take on Mexican strawberries and cream, incorporates fresh strawberries and homemade strawberry jam in the mix with a white chocolate and yogurt topping that's not too sweet.

“My mom always included those cookies with my lunch growing up,” Moreno says.

While the namesake cookies are crunchy, Moreno “took inspiration from the snickerdoodle but incorporated real Mexican canela [cinnamon] that I grind myself into the dough and on the top of the cookies. It’s not processed and tastes way different.”

And finally, there’s the Cajeta Con Coco with fresh unsweetened coconut, a homemade cajeta and bittersweet and milk chocolate with a hint of Abuelita, inspired by Moreno’s favorite Girl Scout cookie “but with a focus on actually being able to taste the cookie and not just the toppings.”

With Moreno, thoughtfulness goes beyond the flavors. You’ll notice the cookies are not of uniform shape, a sign that each is formed by hand. The size, each 1.5 ounces, is an intentional decision.

He wants you to be able to sample multiple flavors per cookie eating session. And you’ll definitely want to.

Moreno estimates he’s baking approximately 500 to 600 cookies a week these days, with a focus on maintaining quality, rather than expanding quickly. His entire setup consists of one stand mixer, four sheet pans and one oven — and sometimes, the help of potentially the next chef, his eldest son who shares his love of being in the kitchen.

Cookie baking starts after 9 p.m. each Friday with the goal of providing cookies that are less than 12 hours out of the oven when customers pick them up.

Orders open at 7 a.m. Thursdays s using the form Oak Cliff Cookie Co. posts to its Instagram, with payments made through Zelle. Pickups are each Saturday at Moreno’s home in Oak Cliff.

Options include a nine-cookie jar for $12, with your choice of one flavor, or a 20-cookie box for $25, which includes all five flavors.

Our suggestion? Go with the box so you can try each flavor and tell yourself you’re going to share it with the family or your quaranteam. We won’t ask whether you ended up actually sharing.

“I want to bring people to Oak Cliff. I love my community, and I would love to be a pillar in my community,” he says.

At some point, if you’re a random lucky customer, you may find yourself with a calorie-free treat in your next pickup in the form of an Oak Cliff Cookie Co. branded glass cup or glass milk carton.

Moreno’s goal is to “learn as much as I can right now and put everything in focus. I’m not building a small business. I’m building a family cookie empire.”

On what he wants for his customers, he says “It’s not just the cookies. I want to give them a long-lasting memory, as well.

“Times are tough. We don’t know what’s going on right now but we can do this. Everything is going to be OK. We can do this. One cookie at a time.”

And, when all else feels out of control, let cookies take you home.
KEEP THE DALLAS OBSERVER FREE... Since we started the Dallas Observer, it has been defined as the free, independent voice of Dallas, and we'd like to keep it that way. With local media under siege, it's more important than ever for us to rally support behind funding our local journalism. You can help by participating in our "I Support" program, allowing us to keep offering readers access to our incisive coverage of local news, food and culture with no paywalls.
Make a one-time donation today for as little as $1.