Whitney Amber Kendall (left) and Julianna Bradley are the founders of Radix, a vegan Dallas food company that wants to convert nonbelievers with their cashew-based Dream Cheese. courtesy Josua Coats
Julianna Bradley and Whitney Amber Kendall are the co-owners of Radix Foods, a plant-based food operation here in Dallas. Radix, which celebrated its one-year anniversary this month, will be a vendor at the Texas Veggie Fair on Oct. 27, in Reverchon Park.

Bradley became vegan six years ago after battling an autoimmune disease. While working in rural Mississippi for Teach for America, she developed MRSA.

“It was dramatic at the time. I recognized it was a symptom of a lot of different problems," she says. "I started looking into health; I had never been really health conscious. I did a lot of research and reading on my own. I started to see how many medical issues are tied back to food. I basically healed myself by cutting out things in my diet over the course of a year and a half.”

Being in Mississippi also affected how she saw the country as a whole.

“I saw so clearly the intersections of poverty and racism and how that plays out in our country, especially in the South," she says. "Food insecurity is one of the big issues I noticed there. Even though it’s a rural place, with farmland, it’s corporate-owned."

Becoming vegan was a gradual process for Bradley. 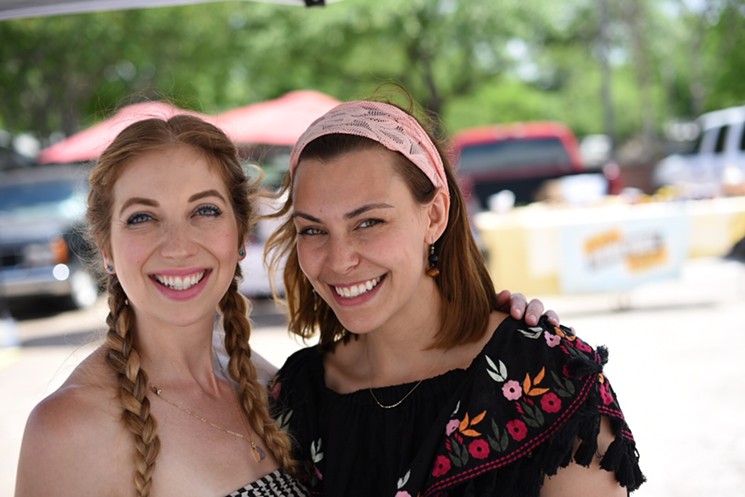 “It’s not just about food — it’s about social justice,” Bradley says.
courtesy Josua Coats
“I remember when I first heard the word ‘vegan,’ I thought it was super weird," Bradley says. "But as I started to make these little changes, I felt and looked so much better. My overall outlook on life was better. At that point I was hooked.”

Bradley’s business partner Kendall had a similar experience in her journey toward veganism.

“We didn’t know each other at that time, but we had similar stories, individually. In our own ways, we sought out our own healing,” Bradley says. "We learned it takes a lot of prep work and cooking to be vegan, especially in a city like Dallas where there aren’t a lot of vegan options readily available. Over the past six years, we’ve gotten really good at making plant-based, mostly raw and probiotic food that people love — even people who don’t like vegan food usually love our food."

Kendall has been in the food industry her whole career. Previously, she worked at Trinity Hall, where she persuaded them to add a vegan menu.

“They saw their sales increase 20 percent," Bradley says. "She really made an impact there." 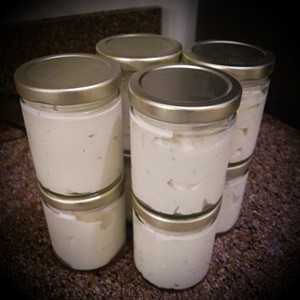 Radix's Dream Cheese is a cashew-based riff on cream cheese.
courtesy Julianna Bradley
Now, Kendall works at Savor in Klyde Warren Park and recently persuaded the restaurant to add a vegan crab cake to their menu.

Next weekend, they'll be at the Texas Veggie Fair selling Radix's Dream Cheese, a cashew-based "cream cheese," and a chocolate "cheesecake" in a jar.

“We’ve wanted to do something together for a long time, but finally a year and a half ago we said it’s time. It’s a lot of work and completely complex. We’ve had to go pretty slowly. When we first started, we were selling at Good Local Markets. The Texas Veggie Fair is by far the biggest thing we’ve done," Bradley says. "After that, we want to get our products in local shops. We’re in a period of growth right now, looking for partnerships. We want to get a steady production line going throughout the city.”

At its heart, Radix is deeply community-focused.

“It’s not just about food — it’s about social justice,” Bradley says. “We named it Radix because the word ‘radix’ is the Latin word for ‘the root cause, or the root source.’ The root of all health is our diet. It also ties back to eating rooted foods, that have been grown in the earth. And it’s about being rooted in a positive change and a vision we have for a more just world.”
KEEP THE DALLAS OBSERVER FREE... Since we started the Dallas Observer, it has been defined as the free, independent voice of Dallas, and we'd like to keep it that way. With local media under siege, it's more important than ever for us to rally support behind funding our local journalism. You can help by participating in our "I Support" program, allowing us to keep offering readers access to our incisive coverage of local news, food and culture with no paywalls.
Make a one-time donation today for as little as $1.
Paige Weaver
Contact: Paige Weaver