Settle Up: Shoals Sound & Service Brings Comfort to Back to the Cocktail Scene

Shoals' bloody mary is made from scratch with every order, no mix involved. Melissa Hennings
Settle Up is a column that critiques cocktail bars with the same gravitas that food critics apply to restaurants, exploring Dallas' cocktail concepts, menus, execution and service and steering discerning imbibers toward all the booze that’s fit to drink.

To build an enviable home bar, you need to invest in quite a few supplies. You’ll need to buy all the essential spirits and mixers, plus an interesting cart or cabinet to store them. You’ll need to find some cozy seating and install dim, flattering lighting. You’ll need to memorize all the obvious recipes and build a chill playlist. And you’ll need to practice making drinks over and over again so you look cool and relaxed when your friends show up.

You could spend most of your adult life trying to capture this vibe, or you could just visit Shoals Sound & Service in Deep Ellum. This new, retro spot has the intimacy of an at-home cocktail den yet the pedigree of some of the best bartenders in town. 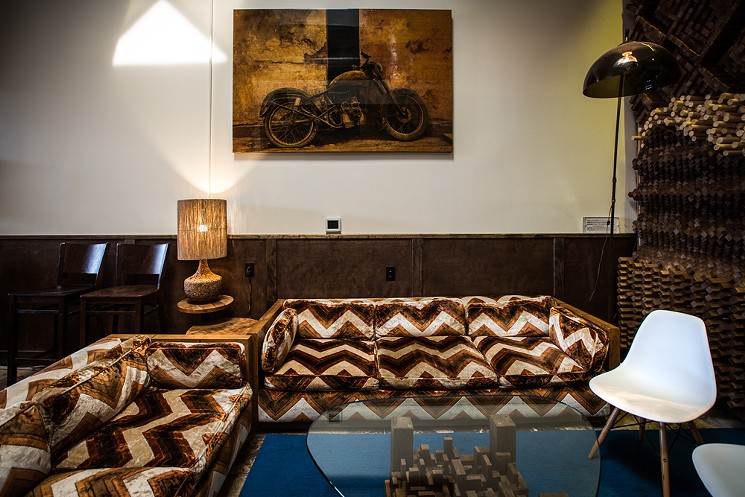 The vibe at Shoals is retro-modern, like hanging in your grandma's midcentury modern basement rec room that, after decades out of style, suddenly became cool again.
Melissa Hennings
The bar is named for Muscle Shoals Sound Studio in northern Alabama, a historic recording studio used in the 1970s by Aretha Franklin, The Rolling Stones and Willie Nelson, among many others. Shoals opened in July but closed a few weeks later because of a liquor license dispute. The bar officially got the all-clear at the end of August and is now open for good. 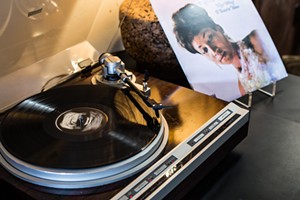 The record player is a centerpiece at Shoals.
Melissa Hennings
In their homage to Muscle Shoals, owners Michael Martensen and Omar Yeefoon (both veterans of the late, great Bar Smyth) brought in a turntable that spins vinyl. Guests can make requests, choosing among records like Elton John’s Greatest Hits (1974) and the soundtrack to The Big Lebowski (1998). The bar also has funkily patterned vintage sofas and old-school bar snacks such as a popular bologna sandwich.

Shoals makes only 20 drinks, all cocktails that a competent home bartender could mix up without having to Google the recipes or make a special trip to Goody Goody. There’s the Manhattan, French 75 and cosmopolitan, for example. All drinks are $10, the glassware is nondescript and the fanciest things in the place are its reusable metal straws, a choice that's just as much about aesthetics as sustainability.

These are comfort cocktails, drinks that are reliably great no matter what decade you’re in. We touched on this topic a few weeks ago with our review of Sassetta, but there is something refreshing about bars today that stick to classic cocktails. It feels timeless yet new. When’s the last time you had a cosmopolitan?

Shoals takes liberties with a few classics, but not much. The rum and Coke is served from a nitro tap. Its briny martini comes garnished with whatever pickled vegetable is on hand that day. One day you may get a pickled Brussels sprout, another you may get a pickled green bean, or if you’re not as lucky, you may just end up with a pickled pickle. Shoals' cosmo
Melissa Hennings
The bloody mary, a cornerstone cocktail here, is a delight. It’s made from fresh tomato juice, Worcestershire, vodka and that’s about it. It isn’t spicy; it’s savory and simple. It makes you feel revitalized, even if you’re drinking it at midnight. on a Tuesday.

If you’re a Dallas cocktail bar regular, you’ll notice a slew of recognizable bartender faces, both working behind the bar and taking up seats as customers. It really feels like a house party, as if the bartenders are at home, reaching into a private, well-stocked bar cabinet to serve you and their friends drinks. Now if only you didn’t have to end the night with that pesky tab.